Despite the broader economic growth, fixed investment inched 0.3% lower in the third quarter. The U.S. economy expanded at a 3.5% annualized rate during the third quarter of 2018, according to an Associated Builders and Contractors analysis of U.S. Bureau of Economic Analysis data released today. This represents the first time there have been two consecutive quarters of 3%-plus growth since the beginning of 2015.

Despite the broader economic growth, fixed investment inched 0.3% lower in the third quarter. Nonresidential fixed investment increased at just a 0.8% annualized rate, a stark reversal from the 11.5% and 8.7% growth observed in the first and second quarters, respectively. Investment in structures plummeted 7.9% after increasing by 13.9% and 14.5% in the previous two quarters.

“While the GDP increased, business investment, including investment in structures, was generally disappointing,” said ABC Chief Economist Anirban Basu. “Today’s GDP release is consistent with other data indicating a recent softening in capital expenditures, which caught many observers by surprise. Coming into the year, the expectation among many was that corporate tax cuts would translate into a lengthy period of rising business investment.

“As always, there are multiple explanations for the observed slowing in capital expenditures,” said Basu. “The first is simply that this represents an inevitable moderation in fixed business investment after the stunning growth in investment registered during the year’s initial two quarters. A second explanation, however, is not nearly as benign. This explanation focuses on both the growing constraints that businesses face due to a lack of trained workers available to work on new equipment, as well as the impact of rising input costs. Corporate earnings are no longer as consistently surprising to the upside, an indication of the impact of rising business costs. It may be that the dislocation created by ongoing trade skirmishes is also inducing certain firms to invest less in equipment and structures.

“If the first explanation is correct, one would expect a bounce back in capital expenditures,” said Basu. “The logic is that the U.S. business community has taken a bit of a breather to digest all of the capital investments undertaken during the first half of 2018. However, the second would indicate economic growth and the pace of hiring to soften in 2019. That obviously would not be a welcome dynamic for America’s construction sector.” 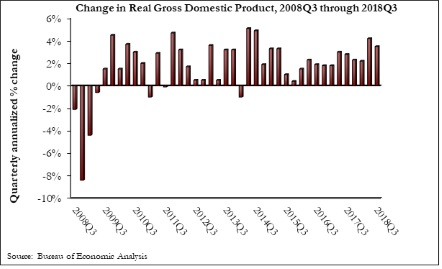