On December 26, 2015, the first EF4 or stronger tornado ever recorded in December in Texas made landfall in Garland and Rowlett, suburban towns near Dallas. According to the National Weather Service, this tornado was part of a larger winter storm that included 12 confirmed tornadoes and resulted in at least nine fatalities. Three of the 12 tornadoes were rated by the National Weather Service as EF2 or greater, with the most intense damage occurring with the Garland-Rowlett tornado.

Damage observations were conducted in Garland and Rowlett after the tornado. It is difficult to learn much, if anything, from buildings that are completely or mostly destroyed by the strongest tornado winds. For this reason, damage assessment by the observation team from APA was mostly limited to the lower EF0 through EF2 tornado wind speed ratings. These wind speeds are typical in the periphery zones of a large tornado.

In most cases, engineers can point to one of several common weak links as the cause of structural failure and damage in this event. Observations of the tornado damage found that structural failure was often due to a lack of adequate connections. Several commonly observed reasons for failure included: using toenails without metal connectors for the roof-to-wall connection; using pins without anchor bolts to attach walls to the foundation; poor structural performance of laminated-fiber wall sheathing products; and breaches due to failure of windows, garage doors, or cladding/wall systems that resulted in catastrophic failure.

Failures were often located at the roof-to-wall intersection. Most of the roof-rafter-to-wall connections in this area were made using toenails through the roof framing into the top plate of the exterior walls. These toenail connections are weak because they rely upon the limited withdrawal capacity of nails. Commonly available light-gauge metal connectors provide superior performance; with these, the load is resisted in directions perpendicular to the nail shank rather than acting to pull the nail straight out. Use of these metal connectors was only observed in one case among the homes where loss of the roof structure occurred. 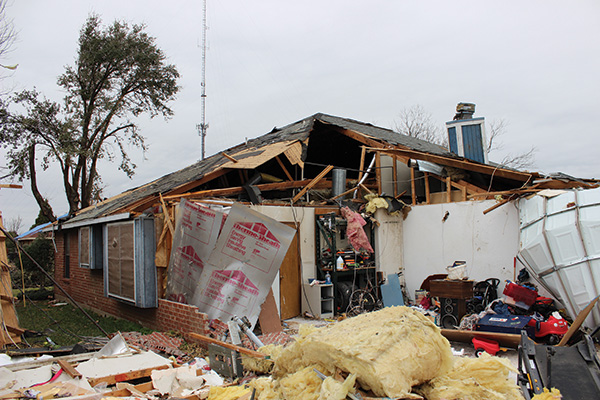 Even in areas with low to moderate wind speeds, breaches in the building envelope resulted in pressurization of the building interior and caused significant failure in many observed structures. Openings in walls due to failure of windows, garage doors, and cladding systems were common. Large breaches from loss of weak garage doors and exterior cladding systems resulted in interior pressurization and exacerbated deficiencies within the load path.

Another common observation across a wide range of wind severity was the loss of exterior walls due to poor attachment to the foundation. In many of these cases, powder-actuated pins of varying lengths were used to attach the bottom of support walls to the concrete-slab foundations. Although equivalent systems are allowed to be substituted, modern building codes generally specify deformed steel anchor bolts to be embedded into reinforced concrete foundations for attachment of wood framing.

Most of the structures observed were sheathed on exterior walls with a laminated-fiber (i.e., paper) product that measured approximately 1/8 inch thick. Common problems in the strength of walls sheathed with laminated fiber include poor load path continuity of framing within wall systems, especially at wall corners, and poor load path continuity within wall systems stacked vertically between stories. The laminated-fiber walls also performed poorly in resisting racking forces from lateral wind loads. Also, these walls were often clad with brick veneer, a brittle exterior that was found to be largely incompatible with the relatively flexible laminated-fiber walls below. The laminated-fiber/brick veneer walls were frequently observed to have sustained damage due to excessive out-of-plane (transverse) or in-plane deformation, which was exacerbated by poor installation of brick ties. Falling brick from veneered walls, columns, and chimneys were observed across a wide range of wind speeds in the impacted areas, representing a considerable threat to life safety.

A common myth is that all tornadoes are so powerful that structural failure is unavoidable no matter how well a building is constructed. In truth, most tornadoes are not that strong. Weaker tornadoes rated as EF0, EF1 and EF2 comprise 95 percent of all tornadoes. These smaller, less-violent tornadoes produce winds which a carefully constructed building can be expected to withstand. Stronger tornadoes with a maximum rating of EF3, EF4 and EF5 are statistically much rarer, with only 5 percent falling into this category. Although the maximum wind forces in stronger tornadoes are harder to resist, improvements in design can still help. This is especially the case when a building is located along the periphery of a strong tornado path. Stronger building components combined with more intentionally constructed connections can mean the difference between buildings that withstand tornadoes and those that don’t.

After the April 2011 Tornado Super Outbreak, the largest, costliest, and one of the deadliest tornado outbreaks ever recorded, APA developed Building for High Wind Resistance in Light-Frame Wood Construction, Form M310, containing recommendations for wind-resistant building. For these recommendations, or to download the complete Damage Assessment Report, visit APA Designers Circle: 2015 Texas Tornados.