For the past year, LPA designers have been engaging with executives from the esports industry to explore concepts for the next generation of esports facilities. Part of Catalyst’s Forward Thinking series, the exercise was focused on developing new ideas to connect the industry in meaningful ways with a larger community and delivering a model for infrastructure to address fast-growing demand.

Early on, the discussion moved beyond the simple model of an esports arena. The real opportunity lies in tapping the energy and enthusiasm of the global fan base beyond the spectator arena, the experts agree. The audience for esports is expected to grow from 167 million in 2018 to 267 million in 2022, which would make it a rival to the National Football League, according to Newzoo, an industry research firm. Gamers and their fans are loyal and passionate, representing a wide variety of demographics. They travel long distances for tournaments and events, which often last six hours or more. 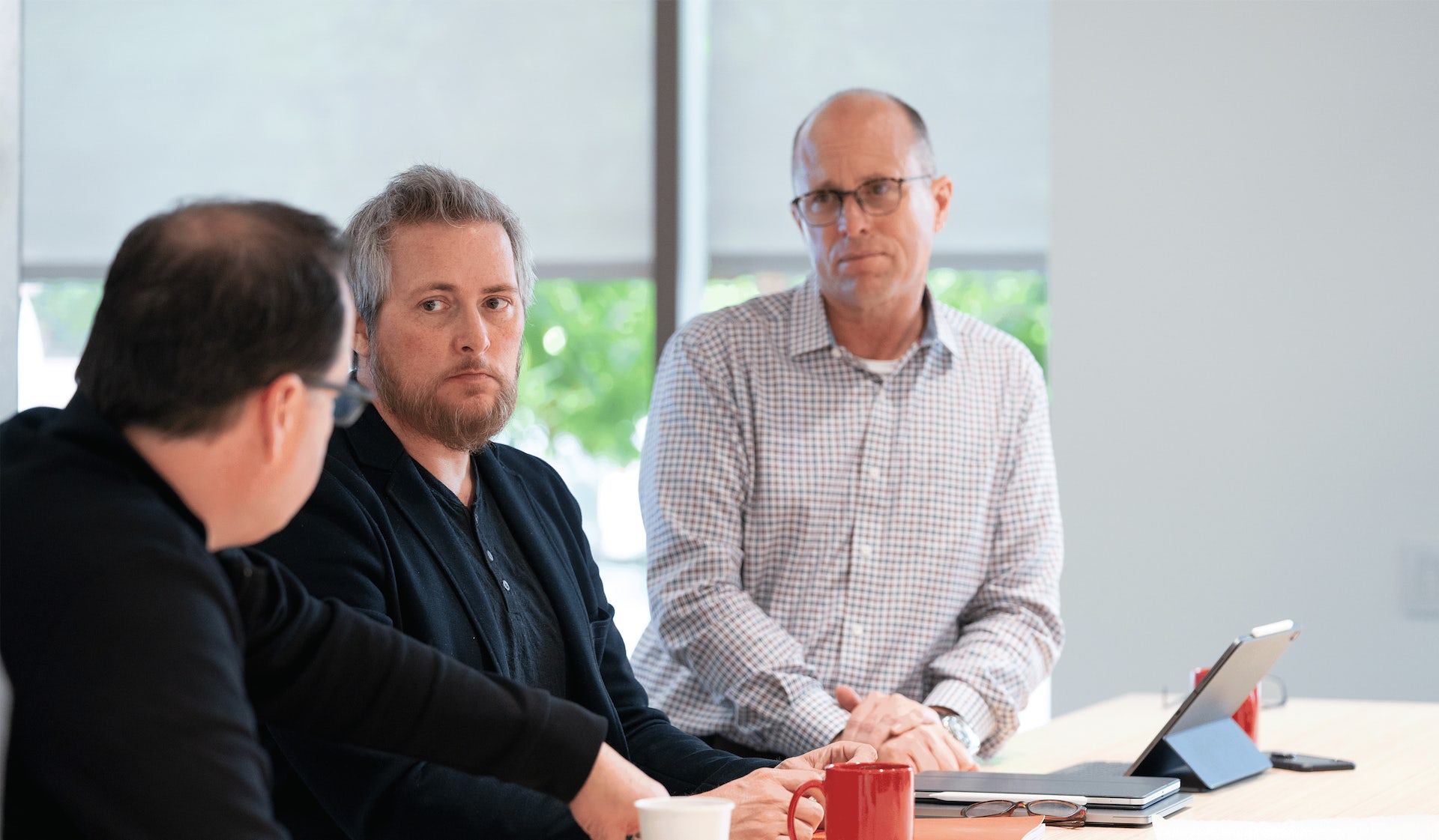 As esports become more mainstream, the challenge for the industry is to break down the walls between esports and the non-gaming community and leverage the available supporting opportunities. The world is still generally separated between esports enthusiasts and those that know almost nothing about esports. Events are typically staged in general-purpose arenas or impersonal broadcast facilities. “The infrastructure to support esports doesn’t exist,” says Michael Thuney, executive producer of De Tune.

Thuney was part of a design charrette hosted in LPA’s Irvine studio that included Tisdale and Mannix, president and creative director of Cake Studios, LLC, a sports-focused branding, design and animation firm. LPA designers from different sectors participated, including Sport + Rec, Civic and Interiors. The LPA team has worked with the game industry on different projects, including corporate headquarters for game companies Blizzard and High Moon, and is familiar with the opportunity to engage different demographics. But they wanted to learn more about the anatomy of esports events, the needs of the industry and the mechanics of an esports facility.

“We were able to really talk about what makes a successful event,” says LPA Senior Project Designer Jeff Schaub, who led the LPA design effort. “There is a six-hour window of opportunity where we can capture people pre-event and post-event.”

The discussion often returned to the opportunities that exist around the games, looking for ways to turn the infrastructure into a facility that attracts an audience day and night. Many of the esports arenas coming online are simply plopped onto an existing parking lot, without the necessary support spaces. “We looked at everything that happens on the outside of the arena, in a broader sense,” Schaub said. “We wanted to know how esports could support a multi-use facility when there isn’t an event happening.”

After months of probing, the discussions always returned to some variation of the same question: “How can these facilities make communities better?” asked LPA Design Director Rick D’Amato.

The final design focuses on reimagining an aging, under-utilized shopping mall, recognizing the economic realities of the shifting retail landscape. The design takes a holistic approach, addressing the different needs and goals of developers, esports companies and the neighborhood. The newest technology is applied to rebrand the aging center. The “bones” of the mall are preserved, but esports serve as a catalyst for a new type of community center.

“There is an opportunity to take older malls and leverage that existing infrastructure to develop a new community asset,” Schaub says. 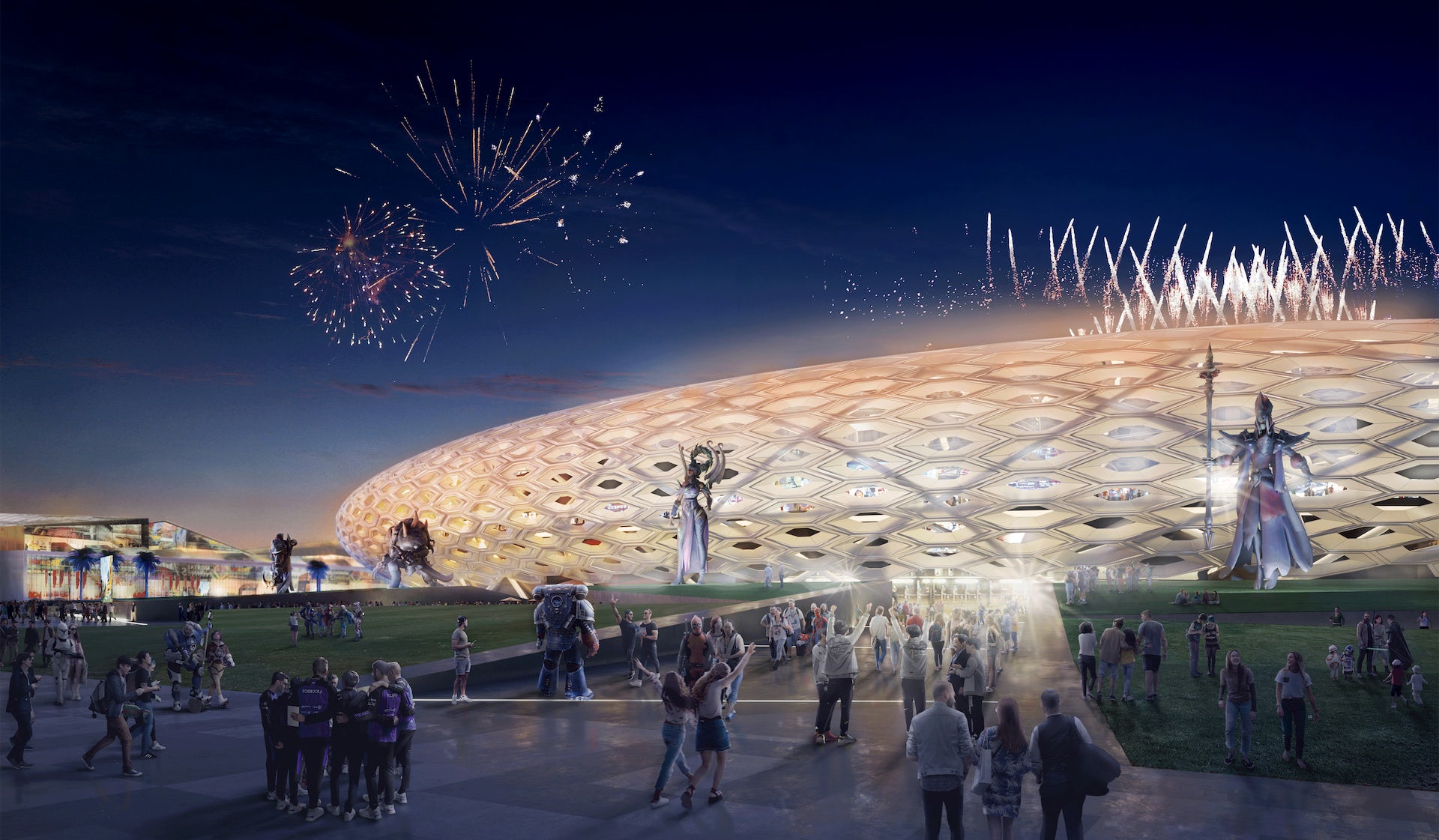 A primary multi-sport esports arena is the centerpiece of a modernized center, which is designed around the interests of the esports demographics. The arena would be designed to host the sport’s big events, with a dynamic-aperture parametric skin that would allow people to see the activities inside while creating a surface for graphics and animation. Community spaces curl around the arena, providing healthy environments for local gatherings and an open-air festival setting during large arena events.

One big-box site in the old mall has been replaced with a secondary LAN (local area network) fusion arena, which would host smaller community matches, training functions and live tournaments. The LAN arena is designed as a flexible space, a modern version of the community rec center, creating the vibe of a skate park for esports gamers.

The heart of the center is repurposed to add new retail spaces and opportunities for brands and sponsors to connect with their audience. Third-level spaces are created for viewing and special game areas. Throughout the venue, there are areas celebrating games and the sports stars.

“This provides a pathway for an esports venue to generate market penetration very fast with the existing infrastructure,” Schaub says. “By looking at the big picture of what an esports venue can be, beyond the arena, it can be much more sustainable for the community.”

The design brings esports out of the dark corridors and creates open, lively spaces around the gaming arenas. There are spaces for players to train and warm up in healthy, open-air environments. The facility raises the bar for the sport, offers a second life for malls and provides opportunities for the esports industry and its sponsors to engage fans in new ways.

Building Something New on the Old

The proposed design uses the infrastructure of the aging shopping mall as the foundation for the new esports community complex. A big box site is removed to provide space for the arena and open the facility to a new audience. 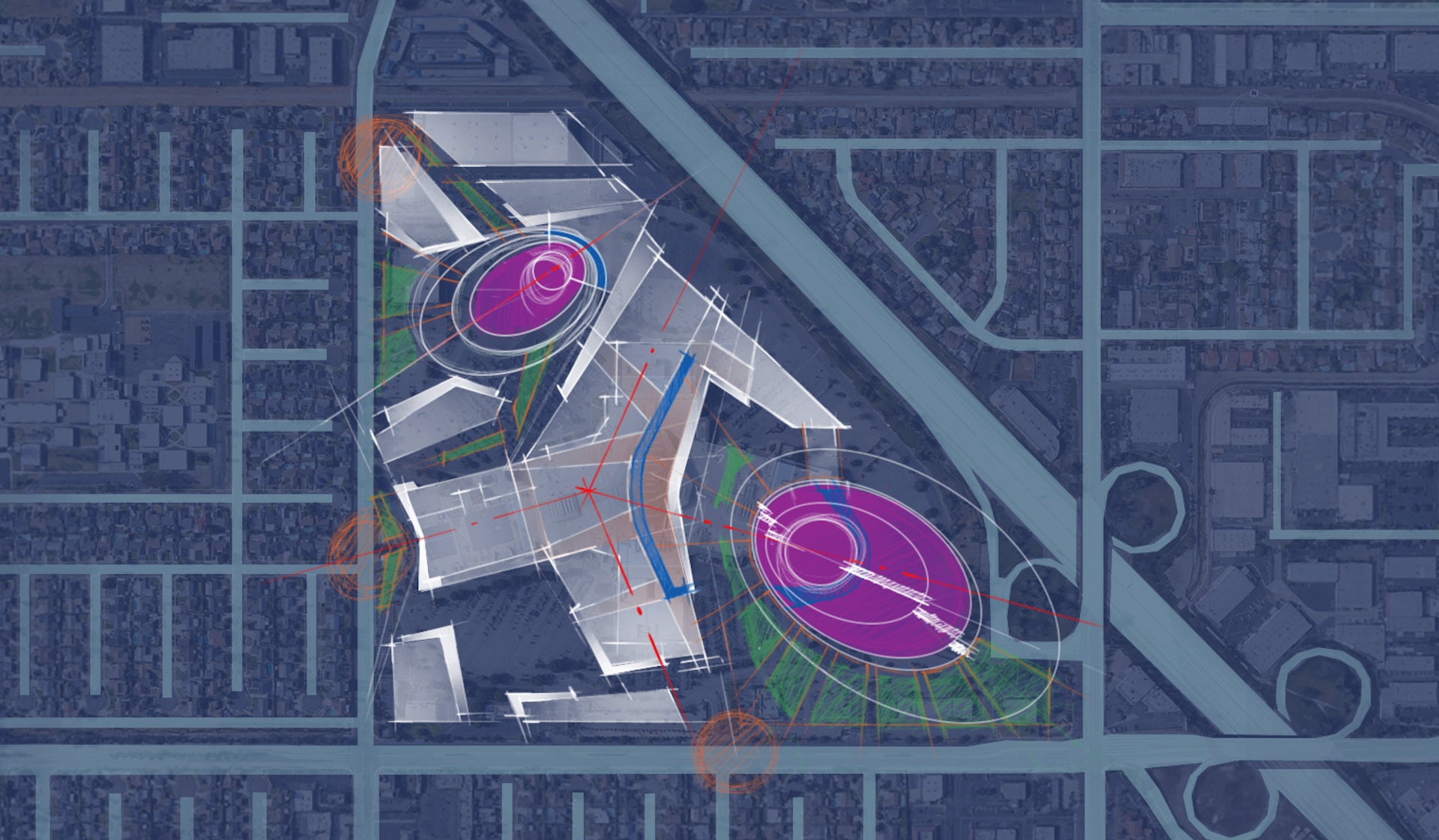 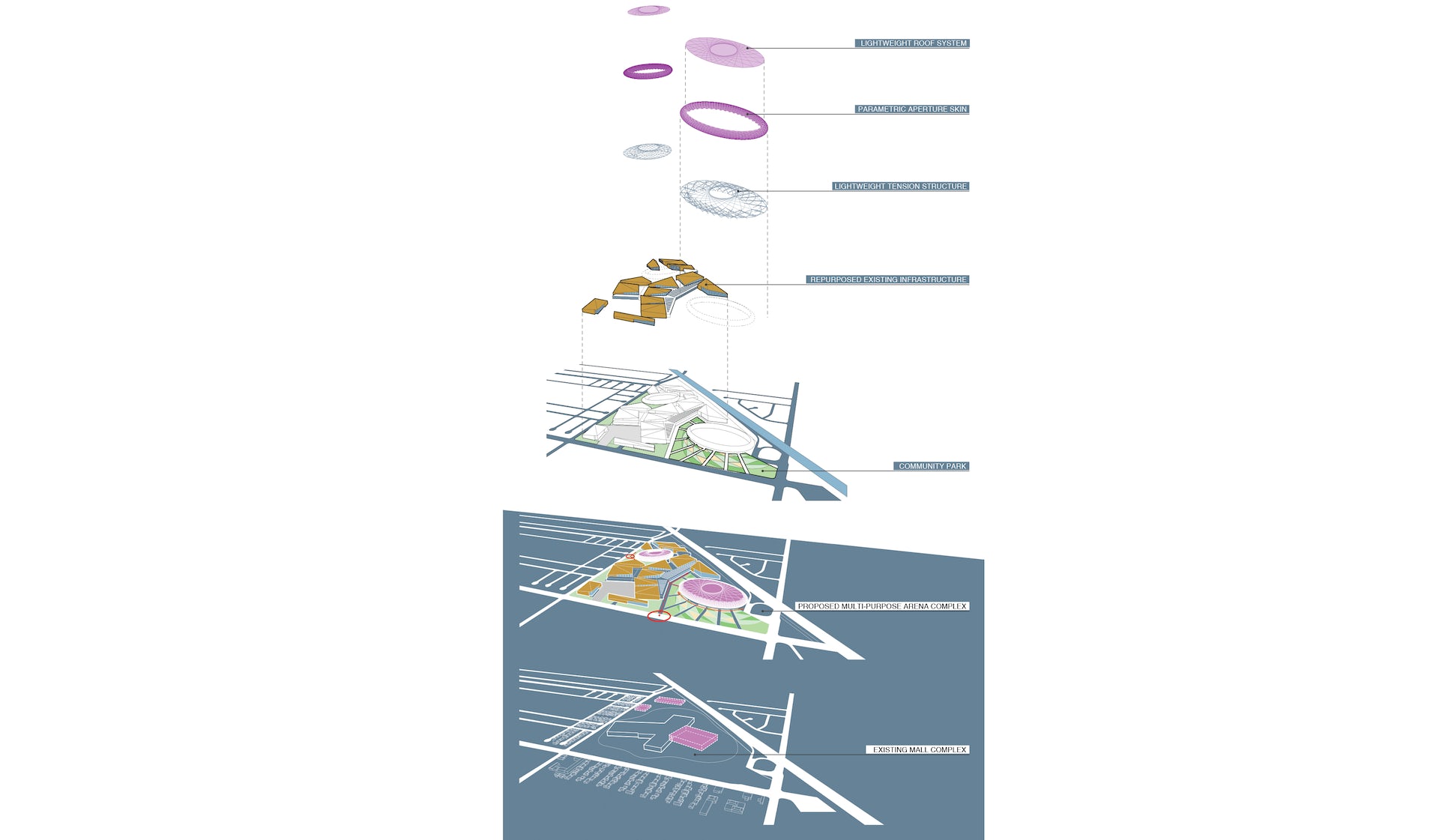 EXISTING MALL COMPLEX: The big box retail store and out buildings would be demolished to provide room for the twin arenas.

COMMUNITY PARK: Engages the surrounding community, reworks the transportation flow and replaces a sea of parking. The space radiates around the arena to become a destination and a pedestrian funnel toward the interior street and main entrances.

REPURPOSED EXISTING INFRASTRUCTURE: The design enlivens the mall relic in a new aesthetic, supporting a new metaphor — the Polygon, the DNA of gaming. 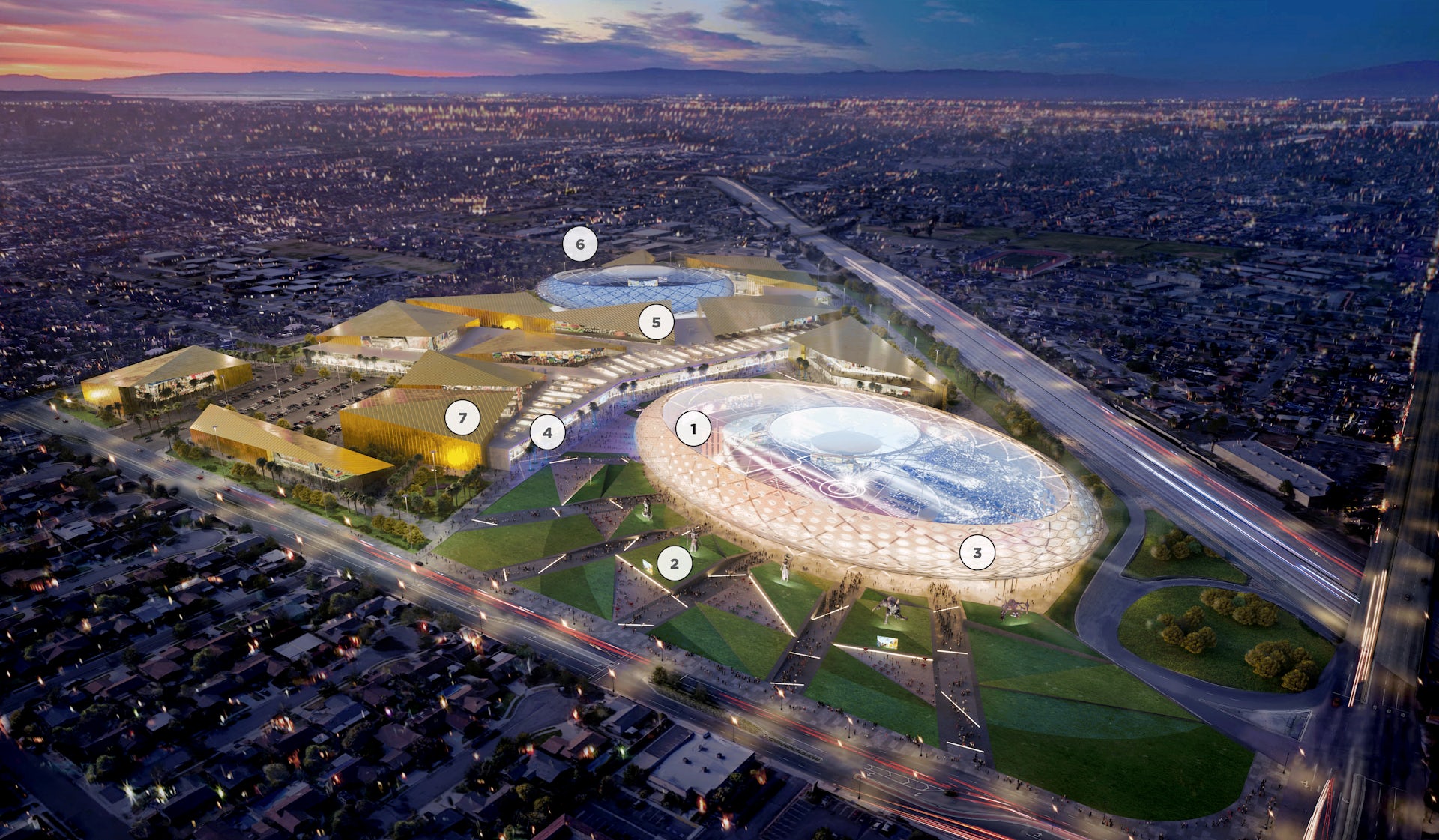 The design uses the bones of an aging shopping mall as the framework for a multi-purpose facility centered around esports. The new model celebrates the popularity of esports and creates new facilities for gamers, while developing a day/night retail and entertainment destination.

1: THE PRIMARY MULTI-PURPOSE PERFORMANCE VENUE is a catalyst for the surrounding development, providing a worldwide destination for major esports events, as well as a multi-purpose community asset.

2: A COMMUNITY-ENGAGING GREEN is a series of radiating green spaces to engage the neighborhood and provide park-like amenities, in addition to spaces for festivals and events.

3: THE DYNAMIC APERTURE PARAMETRIC SKIN of the arena creates a transparent, shifting surface to highlight event activities inside the arena and showcase video and graphic projections.

4: COMPLEMENTARY MIXED USE spaces emphasize the synergies between esports and the entertainment industries, with an array of flexible merchandising, dining, art galleries, education and music areas.

5: REPURPOSED EXISTING MALL INFRASTRUCTURE takes advantage of opportunities to energize under-utilized spaces, including the creation of new third-level areas for events and dining.

7: RE-FACETED MALL SKIN reworks the existing mall facades to reskin the facility in angular geometries alluding to polygons, which are part of the DNA of gaming.

A post-occupancy evaluation of the eSTEM Academy provides valuable lessons for future campuses.

The mainstreaming of modular construction offers a cost-effective and creative solution to develop new types of urban developments.

Buildings can be designed to cut consumption and operate more efficiently, but the pools always make it difficult to achieve substantial savings.

The challenge is to design makerspaces that work, spaces that function as a tool for educators to produce better students.

Designing K-12 schools from the inside out

A building is much more than its appearance; it’s how the user will behave inside of it that determines its adaptability.

The economic case for engaged classrooms in K-12 schools

Flexible, modern classrooms should be viewed as a key element of a sound financial strategy, producing a solid return-on-investment.

How to create healthy learning environments with active design