Skybridge connects a terminal and airport on each side of the U.S.-Mexico border

The airport in Tijuana, Mexico, is literally within walking distance of the U.S.-Mexico border. And cross-country travel is now a bit easier with the Dec. 9 opening of Cross Border Xpress, a 390-foot-long, 33-foot wide skywalk bridge for use by ticketed airline passengers to cross between San Diego and Tijuana Airport.

This is the first project to join a foreign airport terminal with the U.S., according to the Los Angeles Times, which reports that the $120 million private venture expects to serve 2.4 million fliers annually.

The CBX terminal, located on 55 acres between the border crossings at San Ysidro and Otay Mesa on the California side, is open 24 hours a day, and six airlines—Aeromexico, Aeromexico Connect, Interject, VivaAerobus (a no-frills carrier that doesn’t operate in southern California), Volaris, and Aero Califia—provide customer service.

“A project of this magnitude was no small feat and took cooperation from a large number of stakeholders in the United States and Mexico to make it a reality,” says Jim Kilgore, Senior Associate with Latitude 33, the San Diego-based planning and engineering firm that, in association with Otay-Tijuana Venture LLC, provided land entitlements, construction documents, and construction staking services for this project. “Travel, tourism, business and access to both San Diego and Tijuana will be much improved as a result of this facility.”

Otay-Tijuana Venture is a private investment group with U.S. and Mexican shareholders that include PAP Corp., PALAREO Inc., and EGI-Otay Investors. Invex and Banomext were the lenders for this project.

Here’s how CBX works. Passengers flying into Tijuana International Airport pick up their bags and then purchase or print a CBX ticket at the baggage claim area. (Crossings are free through Dec. 18, and then $18 one way for adults, with discounts for seniors and children.) They can skywalk across the border to the terminal in San Diego County, where they can catch a cab, bus, shuttle or Uber to downtown San Diego, 22 miles away, or other destination points. U.S. Customs mans a checkpoint at the bridge for those people entering the country.

Conversely, passengers coming from San Diego can purchase and print CBX and airline tickets at the full-service terminal, and use the skywalk to access the airport in Mexico, which offers flights to 50 cities.

“This will be a great new option for travel between the U.S. and Mexico,” Jerry Sanders, president and CEO of the San Diego Regional Chamber of Commerce, told Fox 5 in San Diego.

The 90,000-sf terminal is the first phase of a 60-acre site that will incorporate two hotel sites, as well as commercial, office, industrial, and shipping facilities over this project’s 10-year buildout. 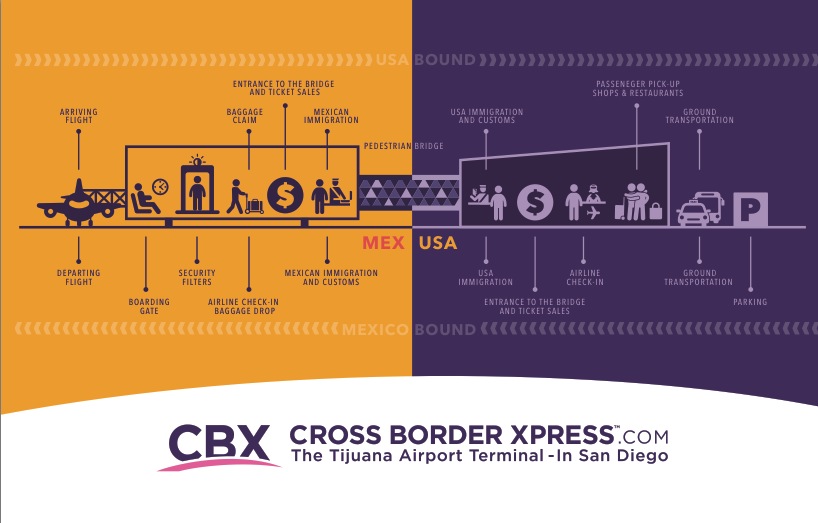