By March of next year, Cebu, the oldest and second-largest city in the Philippines, should have its first bus rapid transit system (BTR) completed.

The system stretches from the Cebu International Airport to the city’s business district, and will connect four separately governed cities, BRT is expected to serve between 15% and 25% of the area’s 3.5 million population, and alleviate congestion for nearly one million citizens.

The 19 bus stations along the BRT’s route—five of which have been assembled and are operating—were designed by Brooklyn, N.Y.-based Carlos Arnaiz Architects (CAZA), a six-year-old firm with offices in Bogota, Colombia, and Manila, Philippines. Its Principal and Founder, Carlos Arnaiz, was born in the Philippines, and is a citizen of Colombia.

In an interview with BD+C, Arnaiz said that the decision to move forward on this project reflects how the Philippines is “reaping the benefits of good government” over the last several years, and has emerged as one fastest-growing economies in the region.

The BRT is a public-private partnership that includes the World Bank, the City of Cebu, and the real estate development firm SM Investments. About 3½ years ago, the World Bank commissioned a transportation study that WSP|Parsons Brinckerhoff completed about 18 months ago.

CAZA was brought on to design the bus stations as well as the surrounding street functions, such as lighting and benches, and road improvements. Arnaiz says that he analyzed the station design of systems serving other metros, including Bogota’s TransMilleno. 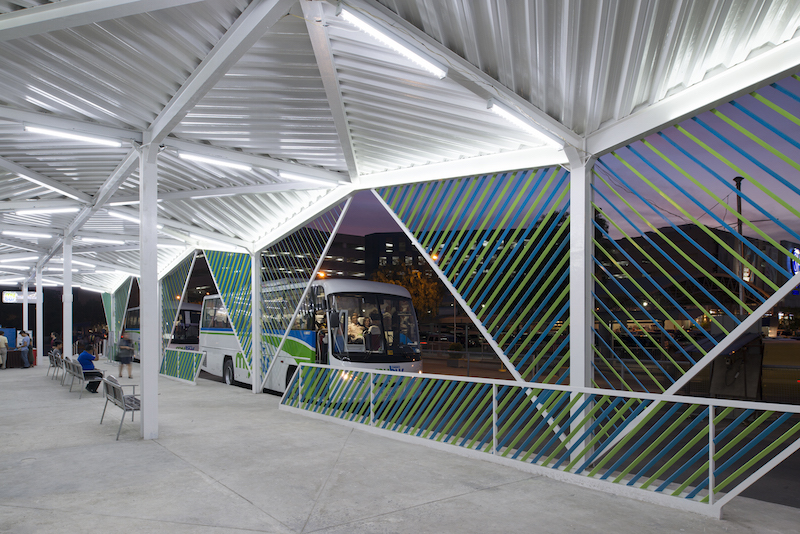 The exterior design of the bus stations is a visual reminder of Cebu's reputation for basket weaving and rattan furniture. Image courtesy of CAZA

“But our system is quite different, and we pretty much had to start from scratch,” he says.

CAZA designed four different station types, the components for each were made in a factory and are assembled onsite. The stations needed to be able to respond to Cebu’s two climate conditions—extreme heat and extreme rain. So CAZA designed the stations to provide shading and ventilation. It also angled the stations’ roofs and elevated their platforms slightly from street level to prevent flooding. (Stormwater is redirected into nearby retention tanks.)

“The biggest challenge was balancing the pragmatic with the need for cultural expression,” he says. Modular production and assembly were chosen for their affordability (the budget for this project is less than US$3 million) and performance. And the stations are architecturally connected to the city by the design of their louver screens that recalls Cebu’s renown for basket weaving, textiles, and furniture. (Curbed recently posted a story about this project with the headline “Bus Stops or Art Installation?”

Arnaiz hopes this project might lead to other transit-oriented work for his firm, which is currently involved in a hotel project in the Philippines and an office tower in Manila. 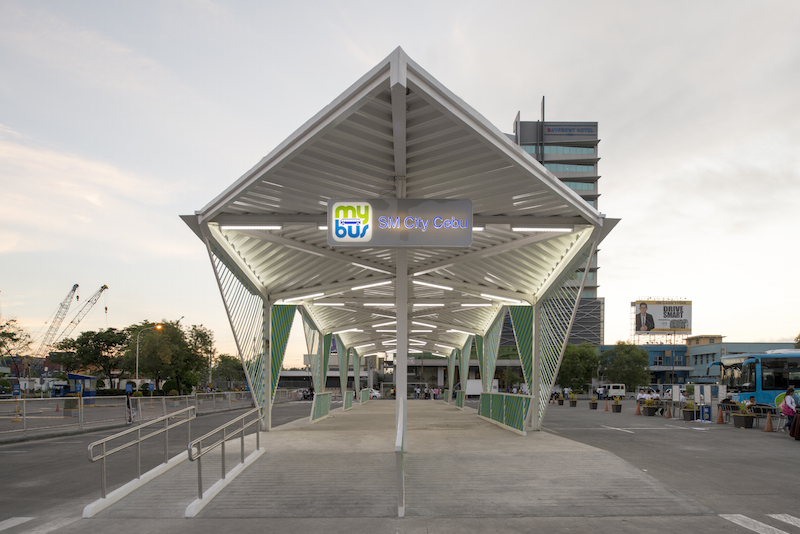 The roof of the bus stops is angled to deflect the heavy rain that Cebu experiences. The stormwater is directed to retention tanks. Image courtesy of CAZA