When it comes to the current state of virtual reality, you can easily go online and read innumerable articles expounding on the topic: Are virtual reality’s uses best suited for gaming, or something else? Can VR be the key to creating real empathy between people?

These topics may be fun to ponder, but they tend to gloss over an important question: How is virtual reality being used by companies around the world right now?

For architecture firms, the answer to that question is multifaceted. Stantec, Merriman Anderson/Architects, and HMC Architects are three firms using virtual reality every day for a diverse set of tasks, ranging from marketing to virtual walkthroughs with clients. Let’s take a deeper dive into how the firms are utilizing VR.

It’s typically owners that get to experience VR and witness their building before it is built, but Stantec also regularly immerses the building’s end users in VR to understand the project from a functionality stand point. The firm’s San Ysidro (Calif.) Land Port of Entry project offers the perfect example of this application.

“This is a major border crossing and is a secure and technical facility,” says Brendan Mullins, VR Research Lead and Designer with Stantec. “We’re doing a security analysis with Border Patrol, and decided this is an obvious place we can use VR. Border Patrol members can walk through their building and do a security analysis before it is ever built.”

Border Patrol members were able to do a security analysis of the project to determine if anything needed to be altered. By doing this before the project was under construction, any necessary alterations would cost considerably less, both financially and in terms of time.

When putting a client into VR, Stantec doesn’t just hand over the reins and say “Go wild!” Instead, they act as a tour guide. “We are saying, ‘Okay, now how about you walk to the main entrance and then stop there and let’s discuss,” says Mullins. “If things go off track it is in nobody’s best interest.”

Giving a user too much freedom can easily derail a VR tour. So, too, can an overabundance of detail or realism. “We want to make sure the client only focuses on and talks about the things that are important,” says Mullins. 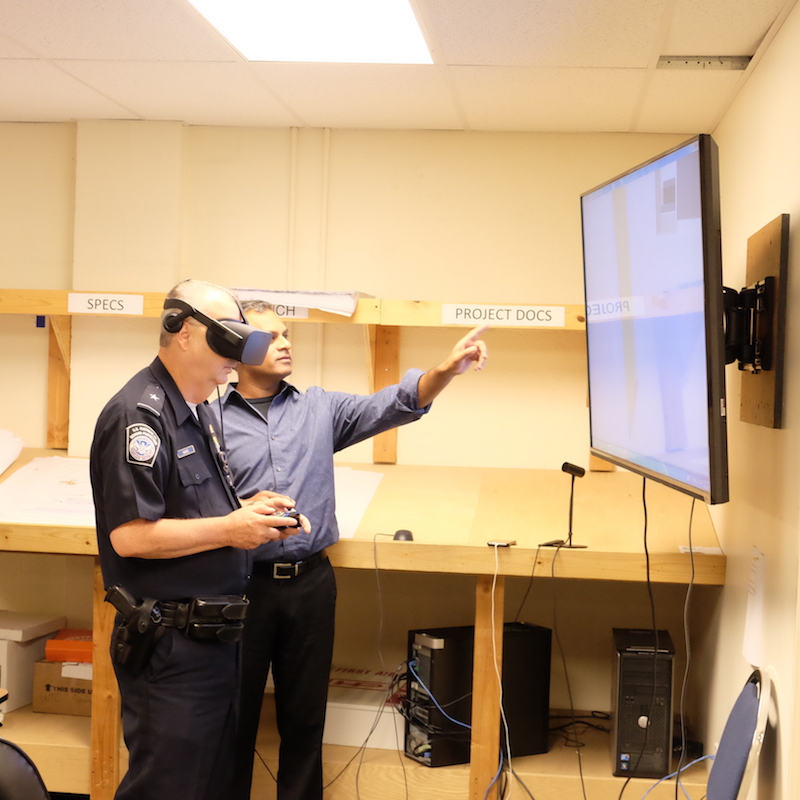 The Program Manager for US Customs and Border Protection uses VR to perform an analysis of the project before construction with Stantec's Principal Architect for the project, Arun Kaiwar. Photo courtesy of Stantec.

VR as a marketing tool

Dallas-based Merriman Anderson/Architects uses VR for concept design, but since using VR to put clients into their future buildings has proved to be such a beneficial and successful use of the fledgling technology, the firm is champing at the bit to use it in other areas of its business.

“We’re also using it for marketing,” says Jerry Merriman, the firm’s President. “We take every client that comes into our visual departments, put the goggles on them, and let them see it.”

Giving possible clients a taste of VR often makes believers out of many people who may regularly vilipend novel forms of technology. “We’ve never had somebody say, ‘This isn’t for me,’” says John Carruth, Director of 3D Visualization with Merriman Anderson/Architects. “Everyone says, ‘How fast can I have this?’ It’s like they were hungry for it without even knowing.”

Merriman believes VR will, without a doubt, win projects for the firm in the future, which is why the firm is allocating resources to customize VR experiences to fit clients’ specific needs.

Shrinking the world through VR

It may not be possible to see how the future of VR within architecture firms is going to play out, but that isn’t preventing the list of hopes and desires of architects from growing.

Designing in VR seems like an obvious next step, but just how logical is it? Much of what an architect does requires the precision that comes from using a device like a stylus or computer mouse. Trying to design a building while waving your arms about isn’t exactly ideal, but that doesn’t mean elements of designing can’t be included in VR.

“I would love to see VR get to the point where I can just get into the model as it sits on a desktop computer and move something from within the VR space or punch a hole in something,” says Evan Troxel, AIA, Associate, Senior Project Designer with HMC Architects. “It doesn’t need to be sophisticated. If I had the ability to grab pieces and make a representational assembly of something in VR, I would love that because then I can go back to the computer and refine it.”

The design process commonly found in architecture of starting loose and then ending up very refined isn’t one VR necessarily needs to blow up and put back together in a new way. But increased connectedness between the desktop computer, the VR headset, and the programs/models they are running may help expedite the overall process, with VR acting as a middle man of sorts.

The possibility of one day designing in VR is intriguing. But perhaps the most exciting avenue VR may take is that of a virtual meeting room.

“The future I’m excited about is to be able to say, ‘We’re going to meet in the model,’” says Chris Grant, VP and Creative Director with HMC. Instead of using conference calls and a shared PowerPoint presentation or PDF, imagine architects, project directors, and clients in different parts of the world with the ability to schedule a meeting, put on their respective headsets, and meet in the VR model.

“We could be walking together in VR, conferencing with each other, and making markups we can all share. Notations can then be taken back and acted upon,” says Grant. “I really think that will be the biggest change in communication that this industry has seen since the beginning of using computers in architecture.”

In this 15-minute talk at BD+C’s Accelerate Live! conference (May 10, 2018, Chicago), AEC technophile Rohit Arora outlines emerging innovations that are poised to transform how we design and build structures in the near future.

Will telemedicine change the face of healthcare architecture?

Telemedicine is a broad term that covers many aspects and mediums of care, but primarily it refers to the use of video monitors to allow a virtual face to face consultation to take place.