In 2009, PNC Financial Services Group, the nation’s seventh-largest bank, approached the architectural firm Gensler with its vision for a new headquarters in Pittsburgh. PNC’s idea rested on three strategic pillars: to be a community builder that supports sustainable urban growth; a workplace innovator that attracts the best talent by creating a collaborative and healthy work environment; and an energy responder that maximizes renewable energy opportunities.

The result is the Tower at PNC Plaza, a 33-story, 800,000-sf office building for 22,000 employees, which opened October 1, 2015. It is one of greenest high-rises to be constructed in the U.S. to date. The tower will use 50% less energy than a comparable building that meets ASHRAE’s 90.1-2007 benchmark, thanks in part to natural ventilation facilitated by a double-skin façade and a solar chimney running through the building’s core. Daylighting, managed by automated blinds within the interior façade, is available to 92% of the tower’s workspace. A water recycling and treatment system will reduce the building’s water consumption by 77%.

This LEED Platinum-certified tower deploys resource-saving components in a unique way, explains Douglas Gensler, AIA, NCARB, Principal and Managing Director at the firm’s Boston office. The project gave the Building Team “the opportunity to push the notion of what a building could be,” says Gensler. 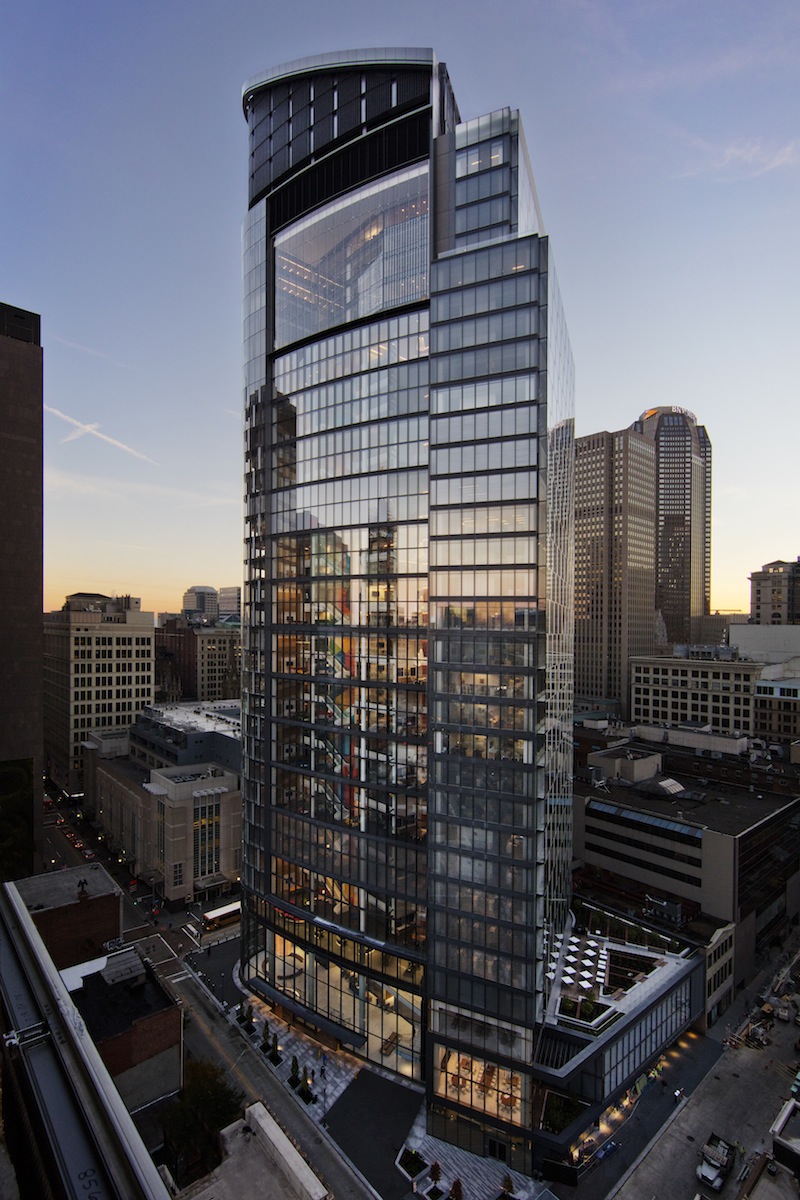 The Tower at PNC Plaza in Pittsburgh lays claim as one of the greenest office buildings in the U.S. Photo: Connie Zhou Photography

Before starting construction on the $400 million tower in the spring of 2012, members of the Building Team toured several innovative structures and buildings, including Manitoba Hydro’s headquarters in Winnipeg, Man. (which is naturally ventilated), The Bullitt Center in Seattle, KfW Bank in Frankfurt, Germany, the Department of Public Works in San Francisco, and the Helmut Jahn-designed Post Tower in Bonn, Germany (which features a mechanical blinds system).

Buro Happold, which provided structural and MEP services as well as computational modeling and analysis, built a replica of the solar chimney on the roof of another PNC building, and connected it to the building management system for a year before the Tower at PNC Plaza got started, says Denzil Gallagher, CEng, Principal based in Buro Happold’s New York office.

The team also built a 35x35-foot mockup of a corner of an office within the tower to test the façade and blinds systems, the lighting and flooring, the sequencing of controls, and even the furniture.

“What we discovered is that when you think holistically, things that you thought weren’t possible become possible,” says Benedict Tranel, AIA, Principal in Gensler’s San Francisco office, and a BD+C 40 Under 40 honoree (Class of 2014). 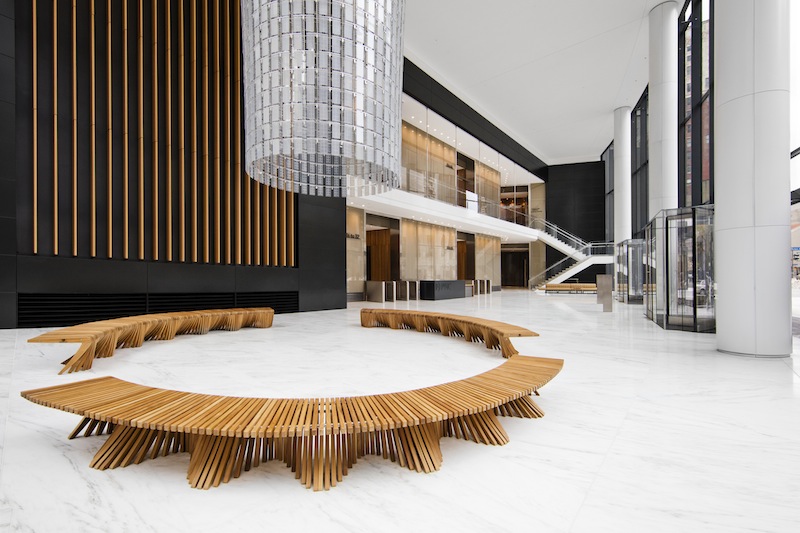 A key to the tower’s energy efficiency is its double-skin façade. The exterior wall features air gates—called “poppers”—that open automatically to vent the 36-inch façade cavity and let outside air into the building. The interior wall has automated louvers—called “floppers”—for natural ventilation, and manually operated wood sliding doors that allow occupants to step onto a “porch” between the interior and exterior walls for fresh air on any floor.

Air circulates through the building via the solar chimney, a vertical shaft with a rooftop solar collection panel that creates an updraft that draws cool outside air through the skin, across the interior space, and up and out of the building without fans or pumps. Gensler estimates that this tower can be ventilated naturally for 42% of the year.

Visitors entering the building’s lobby are greeted by the Beacon, a 30-foot tower designed by ESI Design, which interacts with the building’s sensors to collect performance data like energy use, water consumption, even when a window is open. The Beacon’s LED panels provide continuous real-time visual readouts of that information.

P.J. Dick was the GC on the project. Paladino & Company was the sustainability consultant. 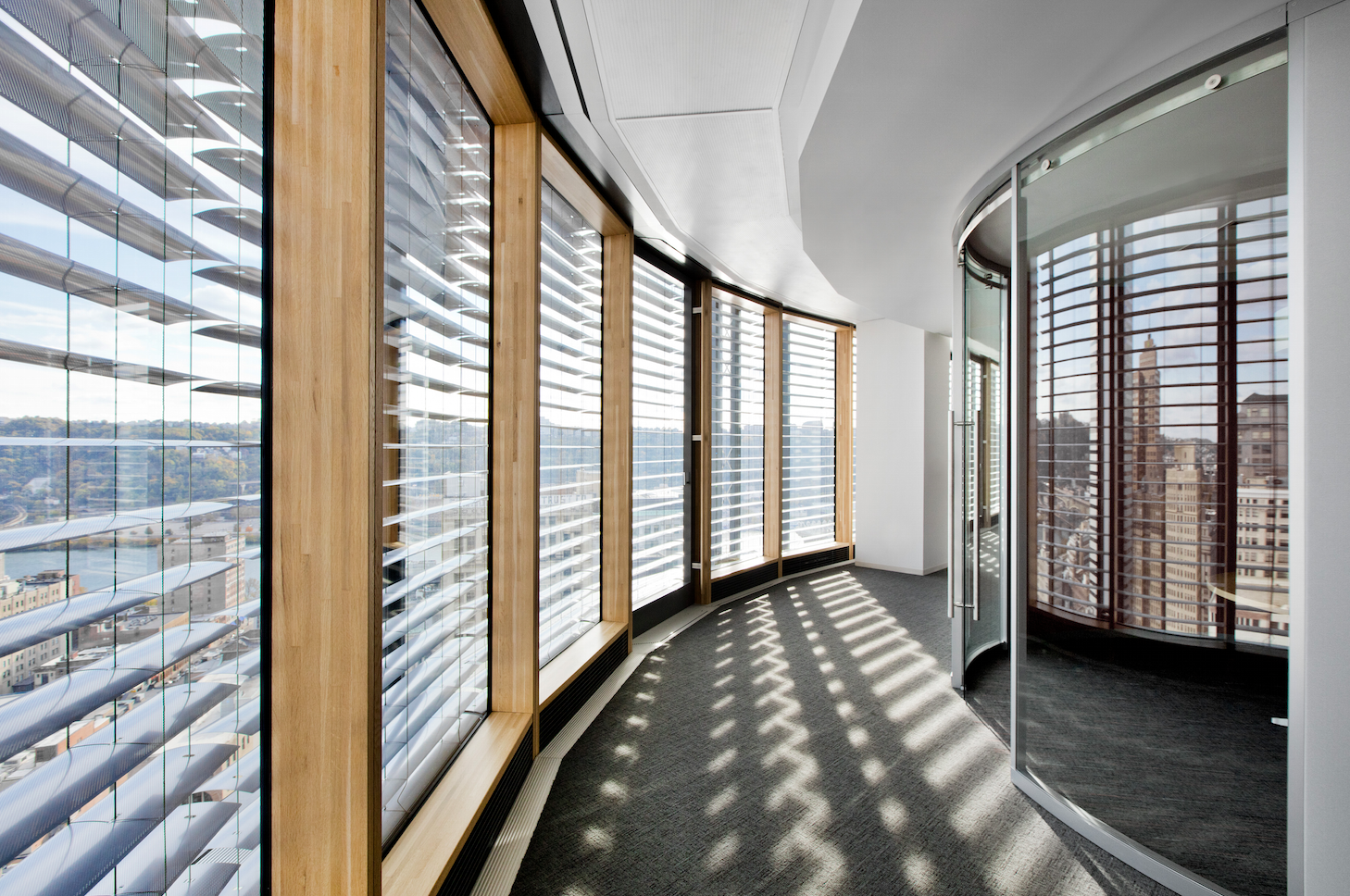 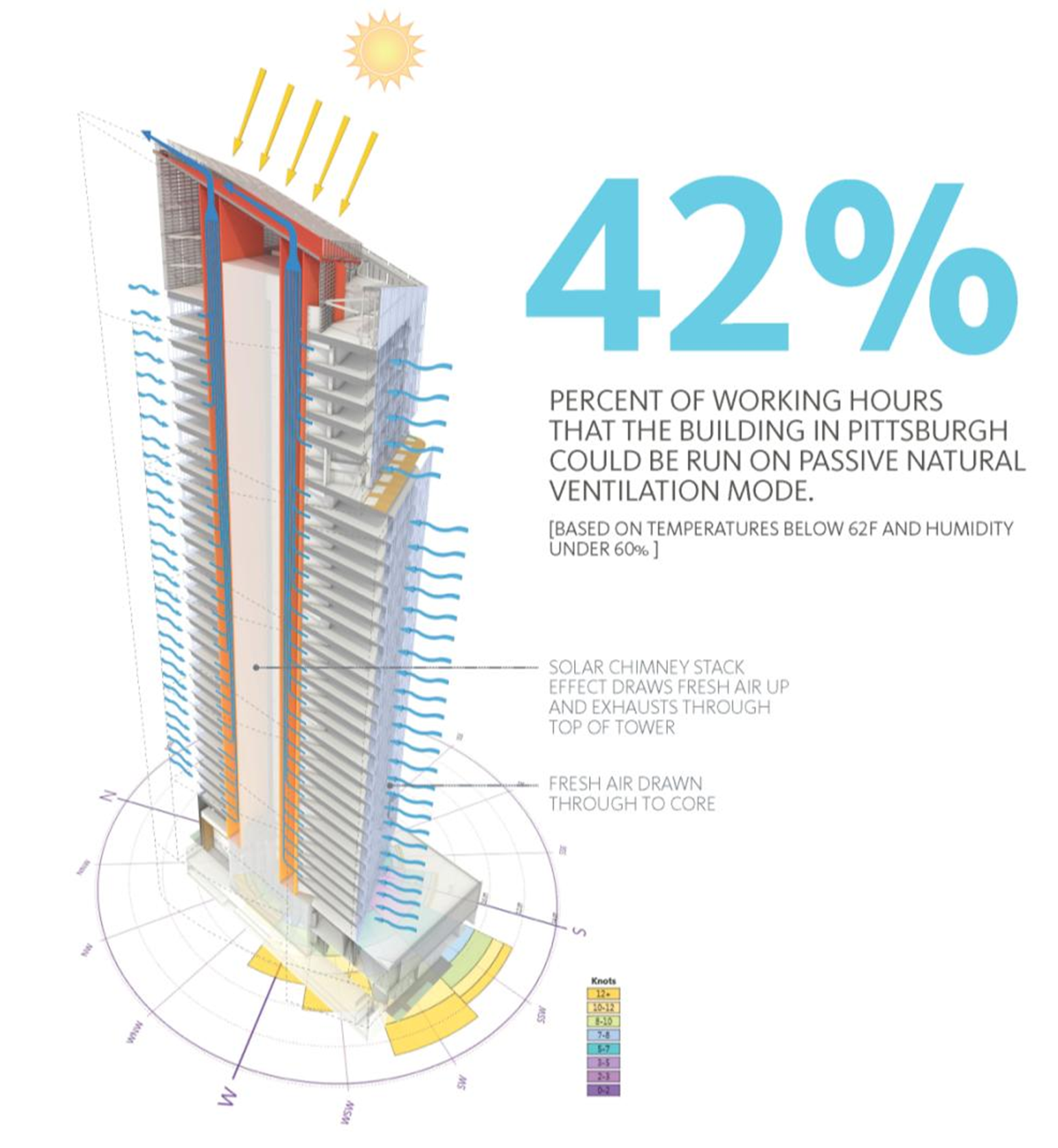 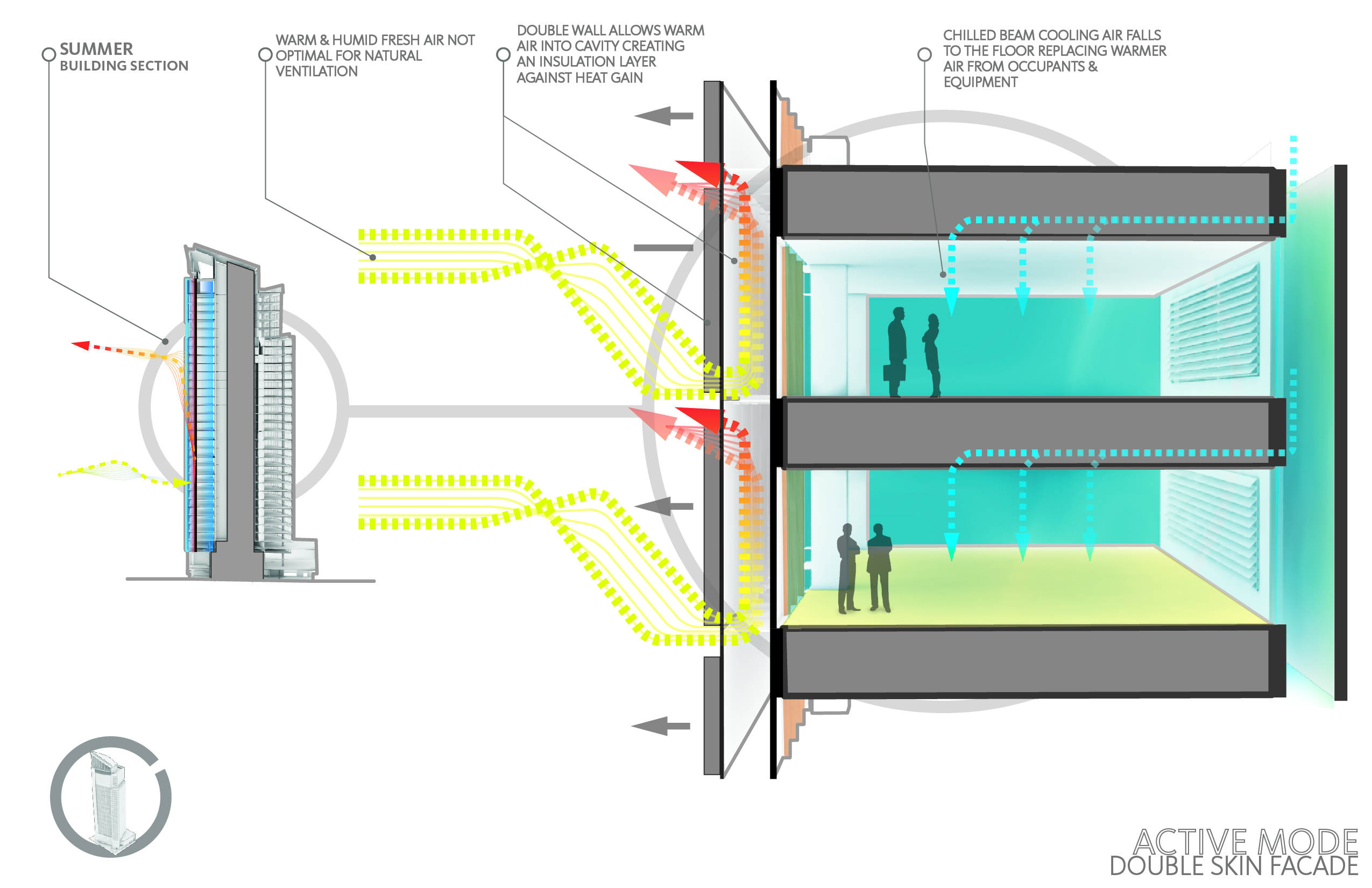 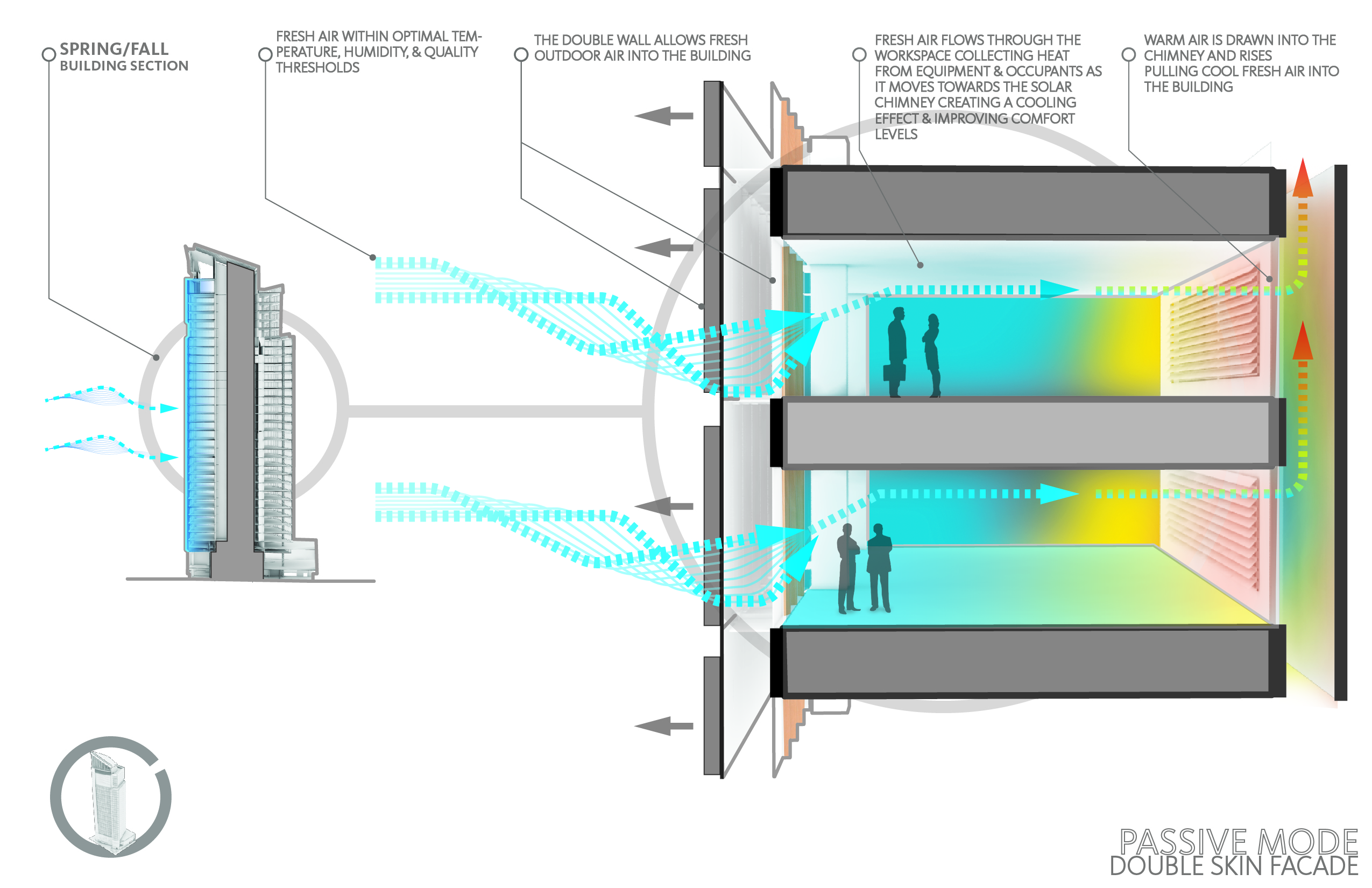 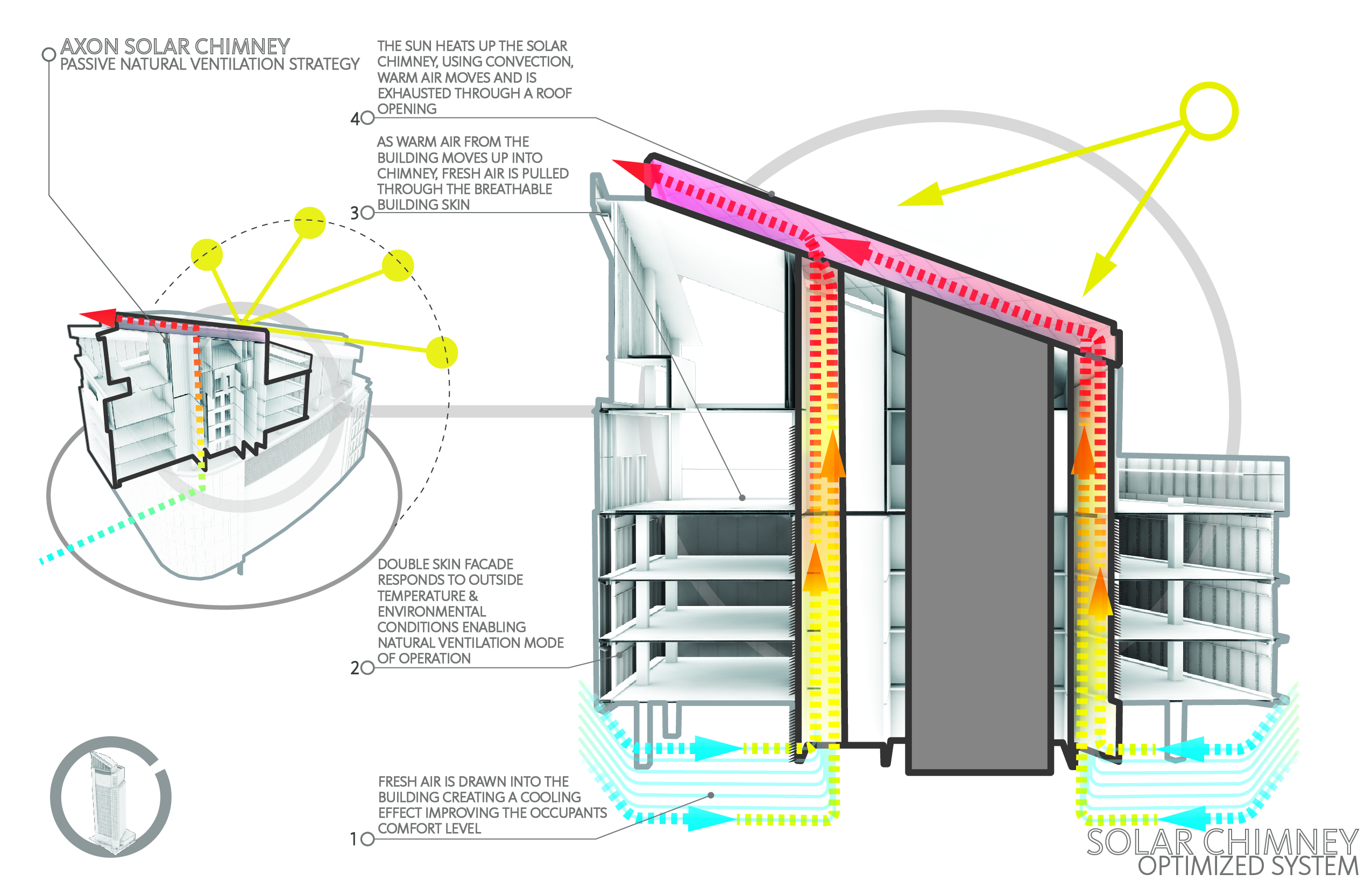 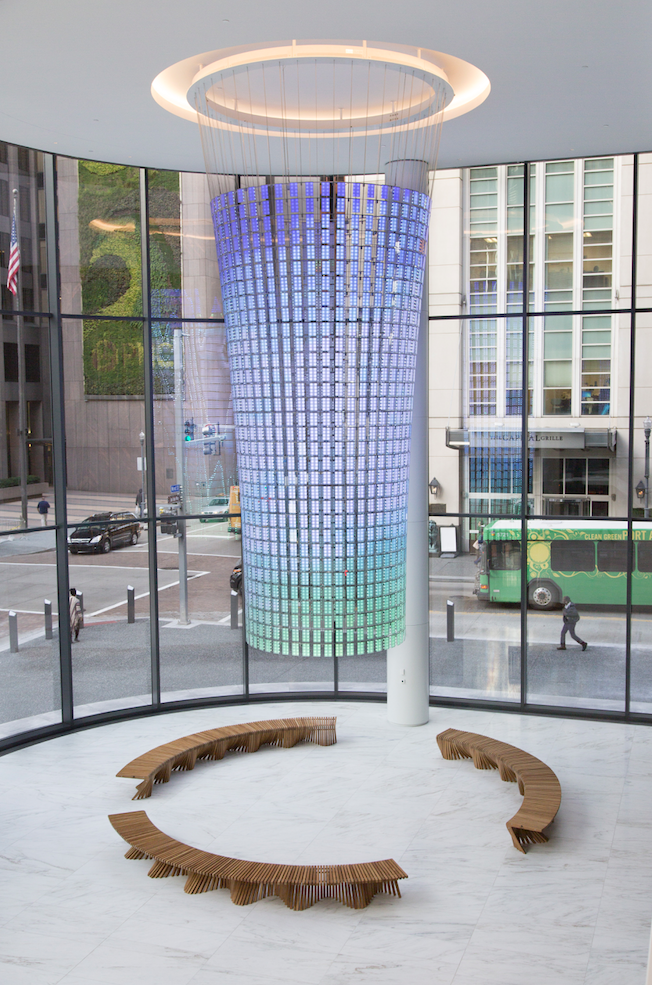 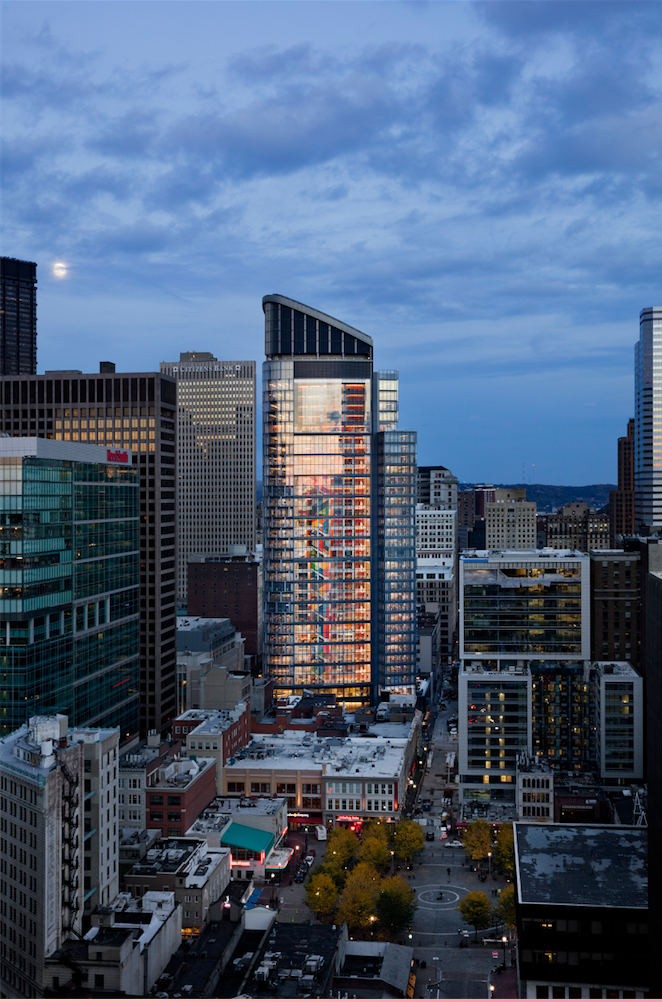