Thirteen out of 16 subsectors are associated with year-over-year increases. Thirteen out of 16 subsectors are associated with year-over-year increases, with the exceptions being religious (-9.1%), communication (-4.7%), and health care (-1%). Water supply (+23%), lodging (+18.9%) and amusement and recreation (+16.2%) have generated the largest increases among nonresidential construction segments over the past 12 months.

“It is true that not all construction spending segments have participated in the industry’s recovery. However, the number of segments experiencing negative spending growth is small and the expectation is that a turnaround in spending is likely in at least one of these categories,” said Basu. “The religious category (-9.1% year-over-year) represents less than 1% of total nonresidential construction spending. Demographic forces and a strong economy should translate into growing demand for healthcare services, which will eventually trigger more construction in the health care category (-1%), including in the form of outpatient medical centers.

“While there will always be reasons to fret about the economic outlook, 2018 will go down as a fine year for the U.S. economy and for the nation’s nonresidential construction sector,” said Basu. “That said, while demand for construction services remained strong throughout the year, many contractors indicate that profit margins are under pressure. Given the ongoing dearth of available, skilled construction workers, that is likely to continue into 2019. However, materials price dynamics could be far different given a slowing global economy and expectations for a strong U.S. dollar next year.” 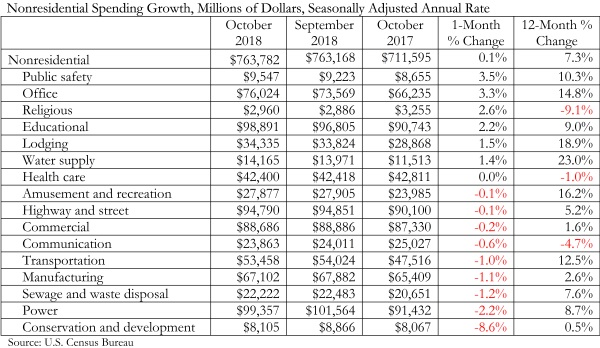 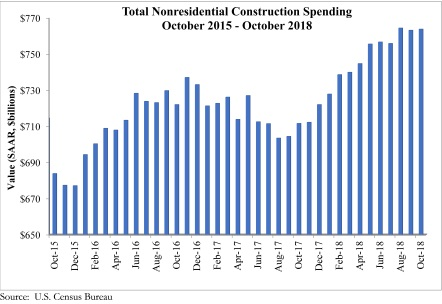