Downtown Philadelphia once was a bustling place. The 1100 block of Chestnut Street, just a few blocks away from the Jefferson train station and a couple blocks away from City Hall, offer affordable living options to those who work in New Jersey. Over time however, this area of downtown Philadelphia was neglected, leaving many mid-rise buildings in a state of disrepair. “This portion of the city has been described as the hole in the donut,” said Robert Wong, NCARB, LEED AP for Blackney Hayes Architects. As a result, mom- and pop-style retail stores took up shop on the first level of the buildings, while the rest of the building moldered away. Several buildings were completely abandoned in place due to absentee landlords.

Within the last few years, Blackney Hayes Architects, along with others, are working with developers to revitalize this area of downtown Philadelphia as part of a larger revisioning project for the city. As part of the revitalization, Blackney Hayes Architects undertook a project to restore and modernize an existing mid-rise building on Chestnut Street, located near Thomas Jefferson University and Hospital.

The owner, Brickstone Realty, had purchased a series of lots that housed five back-to-back buildings. Four of the buildings were in a state of significant disrepair and were demolished. The remaining building, the former Oppenheim Store, was then added onto, creating one large building that spanned a large portion of the lot. However, while it is one continuous building, the L-shaped building is designed to appear as several buildings along Chestnut Street. Design cues for the new construction were based off of the original building, including maintaining the original turn-of-the-century limestone façade.

Designed as a mixed-use building targeting younger professionals and empty nesters, the new building contains three floors of retail area with the remaining floors housing loft-style apartments. In an effort to be sustainable, the building is working on receiving its LEED silver certification. The high-end market rate apartments also boast a green roof providing tenants with raised beds within a courtyard, as well as an upper rooftop clubroom featuring spectacular views of the city for residential tenants. 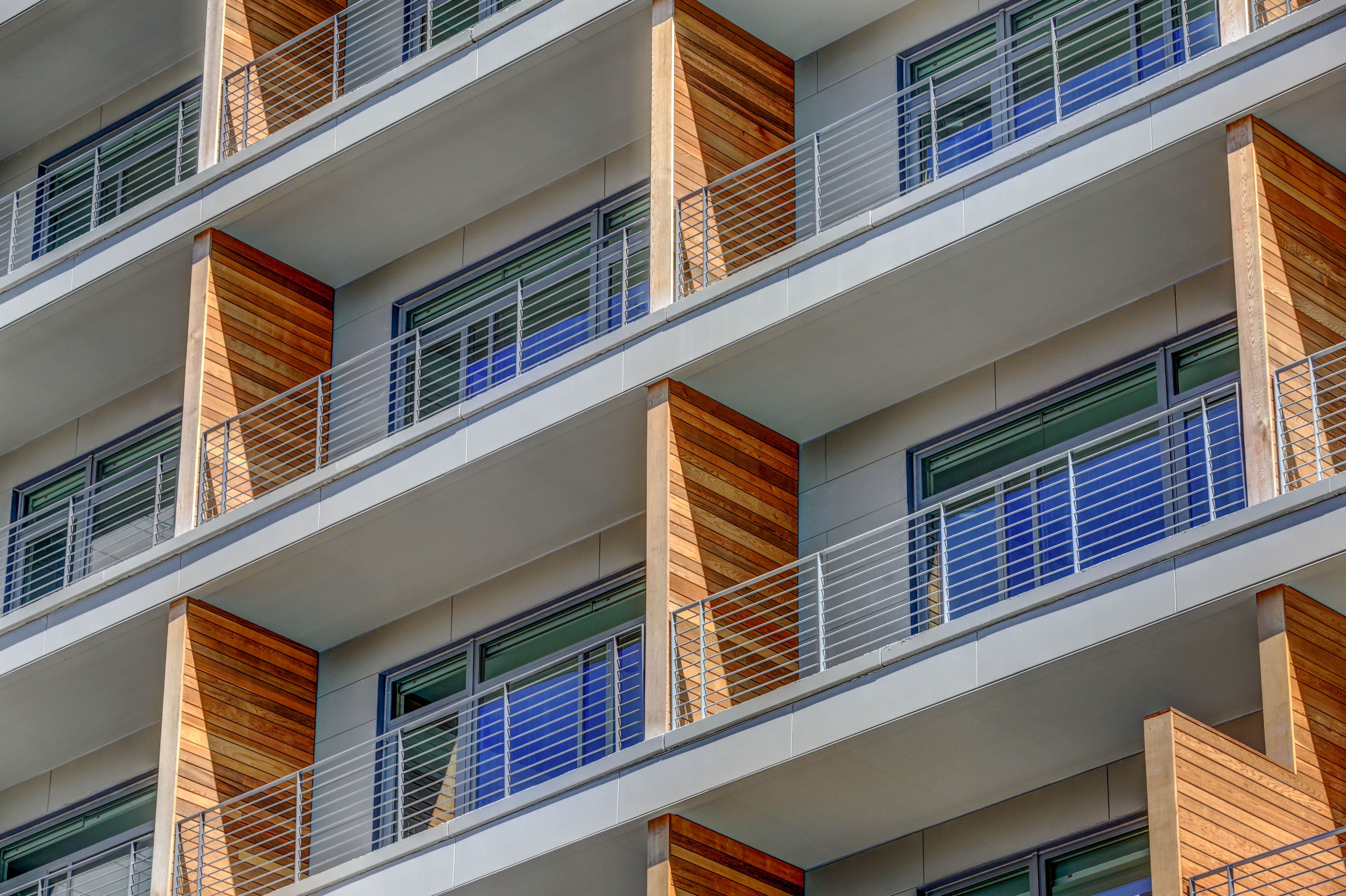 When the construction manager from Clemens Construction Company suggested using fiber cement siding for portions of the building’s façade, Blackney Hayes Architects started researching what Nichiha products offered and how it would play into the look of the building. It was important to find material that was cost effective, durable and design-friendly.

Once the decision was made to incorporate the Nichiha rainscreen into the project, the superintendent attended a Nichiha best practices seminar. After the seminar, a Nichiha representative was on hand to answer any questions and provide support throughout the installation process. “It’s important to have a good working relationship with the Nichiha technical department to make sure you understand the ins and outs of the product,” said Wong.

A Nichiha representative also worked with Blackney Hayes Architects to show them the different products and colors of fiber cement siding. The Nichiha representative presented ArchitecturalBlock, which was a great fit due to its aesthetic fit with the overall design, as well as Illuminations for accent pieces. “Once we got a sample of the ArchitecturalBlock, we were impressed with the quality and texture,” said Wong. 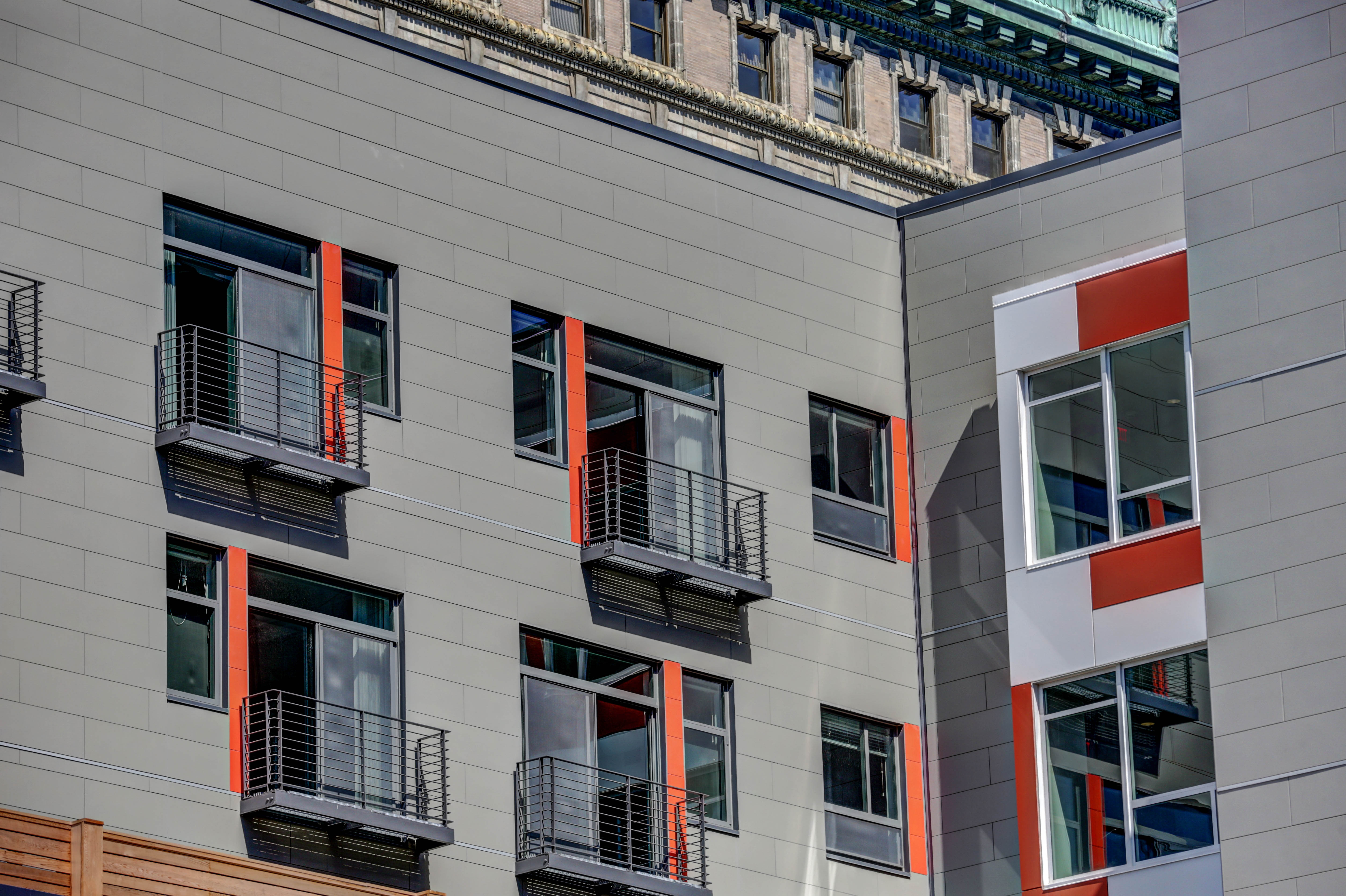 “For the size and scope of our project, the Nichiha panels showcased the look we wanted while providing us with an affordable option for our siding needs,” said Wong.

The side of the building facing Chestnut Street receives a significant amount of sunlight. This created a challenge for Blackney Hayes Architects. ArchitecturalBlock solved the issue since it provides a clean, muted palette while accentuating the other materials used, the iron-spotted black brick and white limestone, instead of competing with them. The architect chose to use the Illumination series Cayenne fiber cement panels as accent pieces in the raised courtyard and green roof, as it closely matches the small amount of orange metal paneling used in the courtyard.

Located in an area of Philadelphia in desperate need of revitalizing, Chestnut Street apartments needed to provide a look and feel that will attract young professionals and empty nesters seeking out urban living at a new high-end market rate.

Mixing products provided the design team with the quality and texture needed for the façade along with a pop of color in just the right areas of the building resulting in a cost effective, durable and design-friendly look.

The resulting design of the Chestnut Street apartments creates a beautiful look that provides a modern twist to a historical area. It is helping to revitalize the downtown area and is drawing professionals back into the heart of the city. Not only does the Chestnut Street apartments provide a beautiful place to live, but it also offers the convenience of living near work.

The continent’s tallest living wall could soon sprout in Dallas

Rastegar Property’s first development in that market is being designed to help reduce that metro’s air pollution.

Top Glass and Glazing Products for 2019