Los Angeles's Hall of Justice gets a reprieve

The Hall of Justice in downtown Los Angeles, which opened in 1925, had a long and notorious history. Its courtrooms and jails hosted the likes of Charles Manson, Sirhan Sirhan, and Bugsy Siegel. The County Medical Examiner performed the autopsies on Marilyn Monroe and Robert F. Kennedy there.

The 14-story Beaux Arts building stood out in L.A.’s skyline. But the Northridge earthquake, which rumbled through the city in 1994, rendered the Hall of Justice structurally unsound. For nearly 20 years, it sat unoccupied. Thanks to a fundraising drive spearheaded by former L.A. Sheriff Lee Baca, the building was revitalized through a restoration effort that, in the process of preserving its design elements and modernizing its facilities, proved to be a considerable engineering and construction feat.

The structural and seismic retrofit alone required the installation of concrete shear walls and drag beams on every elevation of every floor. Over 10 miles of #11 rebar were hand-installed. Two light courts were structurally reinforced from the interior with a system of strongbacks tied to the masonry with about 60,000 helical anchors. The building’s 11th and 13th floors were removed to allow for double-height spaces, which also enhanced the flow of natural light into a previously low-ceiling, dark former jail area.

Four ground-floor columns had to be taken out so a new media room would have unobstructed views. But the only way to get 40-foot-long support beams into the building was to hoist them by crane through second-story windows. The beams, which weighed more than 80,000 pounds, rested temporarily on the second floor with only a few load-bearing columns to prevent them from falling into the basement. The Building Team enlarged the existing spread footings and reinforced the existing columns from the basement to the second floor to support this load.

Seven months into construction the Building Team discovered that steel-frame members encapsulated in concrete fireproofing were coated with lead-based paint. To keep the project on track, the schedule was resequenced so that finishes proceeded from the top of the building once structural work was completed. This way, the team could concurrently execute the lead abatement and remove contaminants going down through the structure. 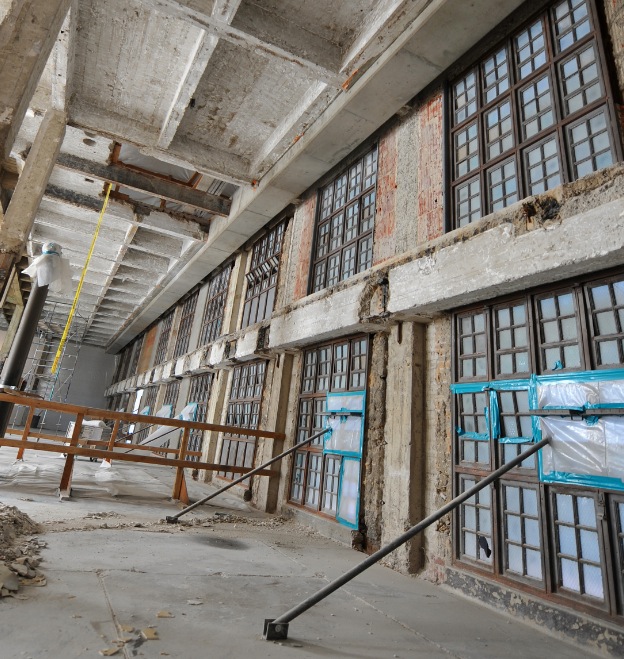 ATTENTION TO EVERY DETAIL

With this restoration, L.A. County’s Hall of Justice was welcome into the 21st century. Completely new MEP systems and lighting controls were installed. The Building Team tied a new elevator network with a destination dispatch interface into the building’s security system, which enable them to eliminate one of the seven elevators.

BIM was critical to meeting the schedule. Using as-built drawings from 1925 as the starting point, design-builder Clark Construction Group generated a model of the structure and supplemented that with field survey details. The as-built model included detailed modeling of the large existing trusses in the ceiling of the 12th floor, which held up the building’s roof where the main mechanical rooms were located.

The Building Team went to great lengths to maintain or restore the Hall of Justice’s original components.

Each of the building’s 1,600 windows was disassembled so that lead paint could be removed. Every single glazing stop screw in the windows was re-created to match the original. The hall’s four historic staircases, which weren’t code compliant, required variance approval to allow the features to remain true to their original character.

A resident conservator performed small-scale mockups, which the historic architect and envelope consultants used to produce a biddable set of specifications. This was particularly useful in maintaining quality control on the exterior cladding restoration.

The project team had access to working electronic files that included a historical database which hyperlinked catalogued photos of the building’s details to the construction plans for reference as questions arose. This helped the team’s efforts to reinstall historic materials as close to their original location as possible.

The project, designed to achieve LEED Silver certification, moved up to LEED Gold. The majority of its envelope was restored. More than 25,000 sf of interior stone was reused or reconfigured. Ninety-five percent of its 12,000 tons of construction waste was diverted from landfill.

Over the decades, the building’s ivory-colored granite had turned a dull gray. To restore the original color, the Building Team employed a micro-abrasive glass-bead blasting system. Clark also saved the owner $1 million when it determined that the building’s existing anchorage, which held the granite to the exterior, satisfied modern seismic requirements and need not be replaced.

This was the largest project that the county’s Department of Public Works had delivered.

The building, which houses the offices of the L.A. County Sheriff and District Attorney, reopened last October. 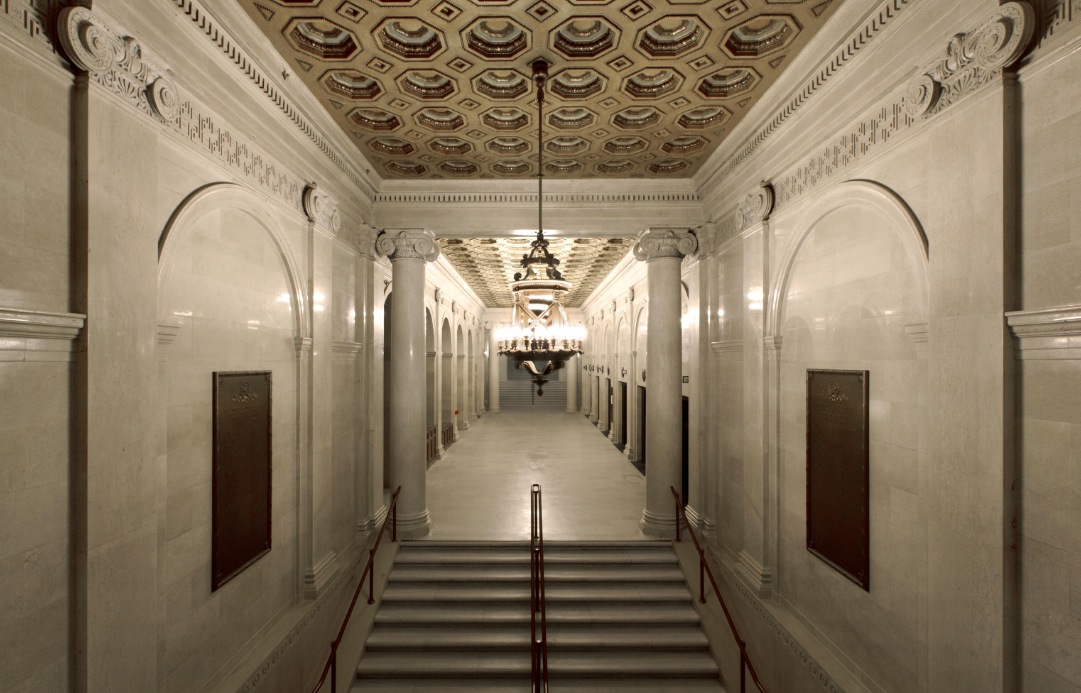 3D modeling employed as-built drawings from 1925 as a starting point to restore the grandeur of the building’s interior. The Building Team also used small-scale mock ups of each piece of the building’s historic fabric. Photo: Victor Muschetto Photography.

Versions of this civic project have been in the works since at least 2015.

Federal contracts are proceeding, but states and cities are delaying, deferring, and looking for private investment.

The 2020 Giants 400 Report features more than 130 rankings across 25 building sectors and specialty categories.