Over two-thirds of office workers in the United States are disengaged from their work. Eight of 10 of those workers are stressed out. So it’s little wonder that U.S. companies struggle to find and retain talent at a time when emerging technologies and co-working trends empower more workers to step off the corporate treadmill and become freelance consultants, a trend that could result in 40% of the U.S. workforce being independently employed by 2020.

These are some of the key findings in Gensler’s “U.S. Workplace Survey 2016,” for which the industry’s largest architectural firm polled over 4,000 American workers in 11 industries using its newly redesigned Workplace Performance Index platform. That platform combines factors that impact user experience to calculate qualitative ratings for physical environments.

This is the 10th year that Gensler has conducted a poll of office workers.

The respondents to the latest survey represented all generations and roles in the workplace, companies of various sizes, and were geographically spread across the country.

Gensler paints a cramped portrait of the American workplace, where smaller desks and less privacy “are the norms” for many workers. From 2013 to 2016, choice of workspace fell at every level of the organization, even as senior leadership continues to report greater choice than professional or administrative staff.

C-Suite and managerial staff are more likely to see their organizations as innovative, with admin and professional staff expressing the opposite viewpoint. Perhaps not surprisingly, Gensler’s data uncovers a link between the quality and function of a workplace and the level of innovation that employees ascribe to their companies. 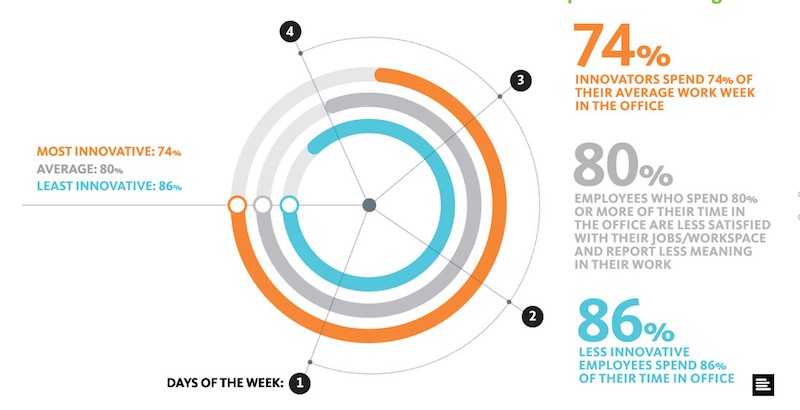 The most innovative office environments are those where innovators are spending less time at their desks, according to a new survey conducted by Gensler. Image: “U.S. Workplace Survey 2016.”

For example, it finds that innovators are five times more likely to have workplaces that prioritize both individual and group work.

Innovators have better designed workspaces of all types. They spend less time at their desks, instead collaborating and socializing from conference rooms, open meeting areas, and café spaces. They also spend more time working away from the office entirely, averaging 74% of an average week in the office compared to 86% for respondents with the lowest innovation scores.

Gensler sees better office design as a cure. “Workplace design prioritizes collaboration,” and reinforces purpose, choice, and equity, the report concludes from its polling data. Gensler observes that innovative companies are also more likely to accept that, thanks to Wi-Fi, “workspace” can extend beyond the office to other meeting places and the outdoors.

Innovative companies, says Gensler, are letting their employees have access to a wider variety of workspaces, and allowing them to work “wherever is best for the task at hand.” This tends to reflect how much companies care about their employees’ career satisfaction and development. “Improve the workplace, and expand choice and autonomy, across the organization to drive innovation,” Gensler advises.

Innovative workplaces give their employees a positive feeling of accomplishment and purpose. Image: “U.S. Workplace Survey 2016.”

The firm conducted a similar survey of 1,200 office workers in 11 industries in the United Kingdom. It found that the UK workplace “significantly favors those in management positions.”  Poorly designed and open-plan environments are negatively affecting more than 8 million UK workers. And legacy workplace behavior and lack of choice are drags on performance.

Gensler recommends that UK companies take a more considered approach to the open plan office, where “the right—and separate—spaces for individual and collaborate work are key.” It also calls for UK companies to expand workplace variety and choice, and match space to role, not status.

And in Asia, Gensler surveyed more than 2,000 office workers in six major metros. It found that Asian workplaces tend to adopt a common, western narrative, resulting in mostly open-plan workspaces combining workstations, offices, and conference rooms. “This hand-me-down model of workplace design … may now be holding Asian companies and employees back.”