From fuel to food: adaptive reuse converts a closed gas station in Princeton, N.J., to a Nomad pizza

There are around 150,000 gas stations operating in the U.S., nearly 53,000 fewer than in 1994, according to the National Association of Convenience Stores and National Petroleum News estimates.

Closed gas stations can be real-estate headaches, partly because of the expense and red tape associated with environmental mitigation and, on occasion, rezoning required to use the property for something else. Consequently, many closed gas stations are simply abandoned, their deteriorating structures standing as grim reminders of a different era.

The more successful attempts at adaptive reuse have seen gas stations converted to restaurants. A few years ago, a CNN story focused on a number of such resurrections, including a dilapidated Standard Oil station in St. Louis, built in the 1930s, that became Olio, a wine bar and restaurant.

This trend can be traced back to 1974, when the Quaker Steak & Lube chain of restaurants began in a renovated filling station in Pennsylvania. (That chain, now with 50 locations in 14 states, emerged from bankruptcy last year when it was acquired by the TA Restaurant Group division of Travel Centers of America. On Nov. 1, TA announced the launch of a franchise expansion push to take the Quaker Steak & Lube concept nationwide.)

Over the past few years, JZA+D—a design outfit based in Princeton, N.J., that celebrated its 10th anniversary in September—has expanded its adaptive reuse practice. Recent projects include the conversion of a Masonic Temple in Princeton to a 100-unit apartment building whose construction is scheduled to begin next month; and an old tannery in Yardley, Pa., whose conversion to Class A office space for Red Nucleus was just completed. 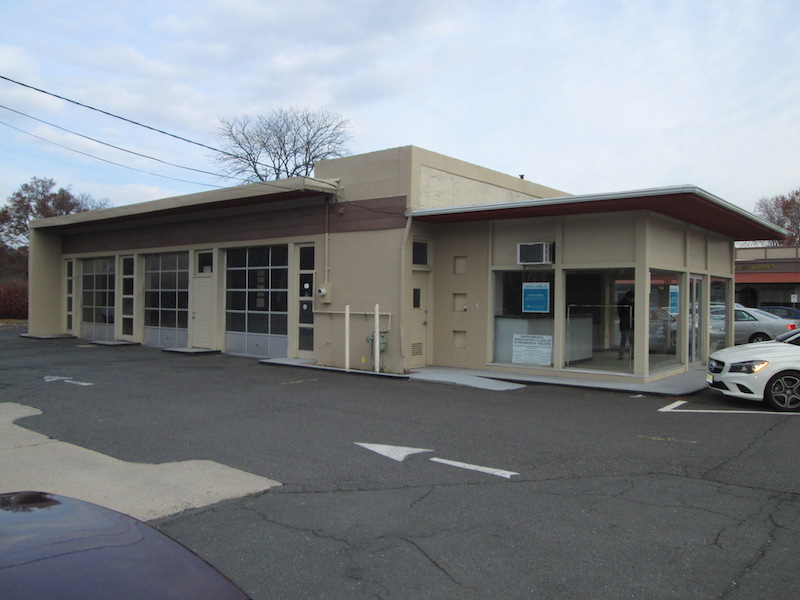 The gas station's original design (above) harkens back to the Modernist movement of the 1930s. Its adaptive reuse as a pizzeria (below) required closing the service bays and garage doors in the rear with a facade of cedar and storefront glazing. Images: Michael Slack, courtesy of JZA+D 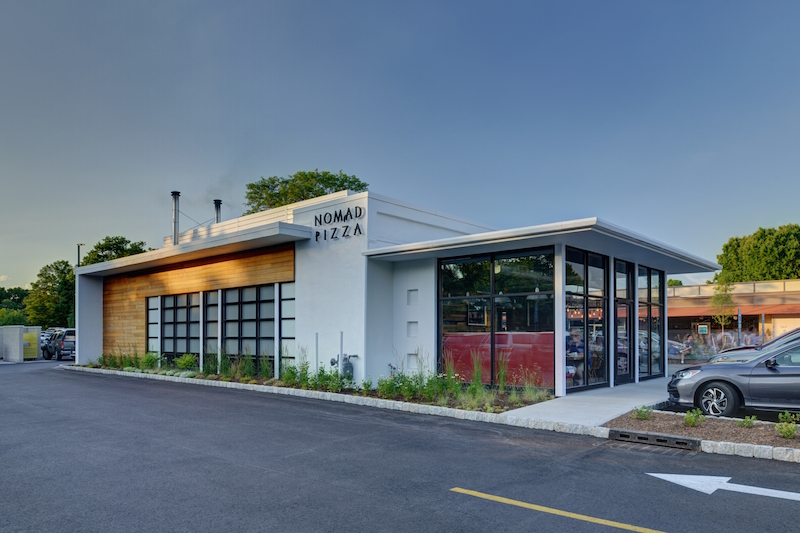 Joshua Zinder, JZA+D’s owner, is a self-described “architecture fanatic.” So when he first became aware that developers wanted to repurpose a closed Amoco gas station near the Princeton Shopping Mall, he immediately saw possibilities of converting a building whose original design reflected the Modernist movement of the 1930s. “It had its own personality,” says Zinder, and his firm attempted to preserve as much of that as it could.

What emerged from that vision was Nomad Pizza, with glass and cedar planes, new awnings, and an outside patio area that seats between 75 and 80 customers. Zinder estimates that the building was around 1,000 sf, to which the new design added 500 sf for the patio and a walk-in freezer.

The drive-through service bays and garage doors weren’t suitable for a foodservice space, so JZA+D closed of the bays and portals at the rear with a façade of cedar and storefront glazing. Specialized doors were installed in the front to take advantage of the original garage openings, and to allow the dining area to expand into the patio area during warmer months. 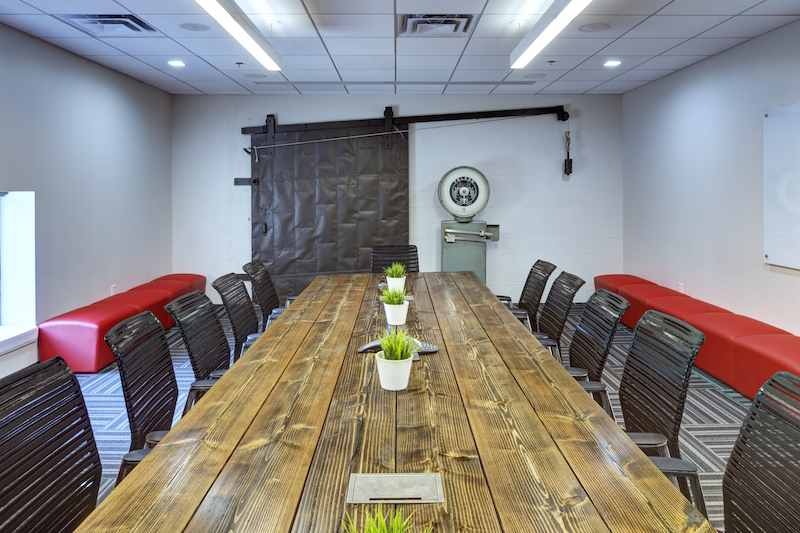 Over the past few years, JZA+D has expanded its adaptive reuse practice, which recently included the conversion of a tannery in Yardley, Pa., to a Class A office space for Red Nucleus. Pictured is a conference room that retained the tannery's weighing equipment. Image: Michael Slack, courtesy of JZA+D

This wasn’t JZA+D’s first gas station conversion; about four years ago it changed a filling station into a Goodwill dropoff and office space. Zinder says he’s receptive to doing more of these, although he hasn’t heard from any property owners yet, despite the fact that Nomad Pizza has become one of Princeton’s go-to eateries since it opened on May. 17, offering 16 pizza choices and four different salads. “There’s lines in front of the place every night,” says Zinder.