By 2008, it looked like the historic Chicago Athletic Association (CAA) building, located in downtown Chicago across from Millennium Park, was destined to become another casualty in the march to modernity.

Built in 1893 for the World’s Columbian Exposition, which had a major influence on Chicago’s planning and development for decades to come, the CAA was an exclusive social club founded by leading figures in American sports and commerce, among them William Wrigley, Jr., Charles Comiskey, and Albert Spaulding.

But once the club disbanded, in 2007, the wrecking ball loomed. The National Trust for Historic Preservation cited the CAA building, which is on the National Register of Historic Places, as one of the nation’s 11 most endangered places.

The building sat dormant until 2012, when an investment partnership came to the rescue and acquired the property with an eye toward converting it into a 241-room boutique hotel.

That transformation became manifest in the Building Team’s re-examination of the interplay between restoration and modern use. While the team introduced several new elements that brought the CAA into the 21st century, it also took great pains to ensure that these improvements were consistent with the original character of the building by showcasing the craftsmanship and materials of the façade and interiors.

“Gorgeously restored and imbued with a modern spirit of play, [capturing] many of the city’s most compelling attractions—architecture, history and food—under one handsome roof” is how The New York Times described the finished product, now the CAA Hotel. 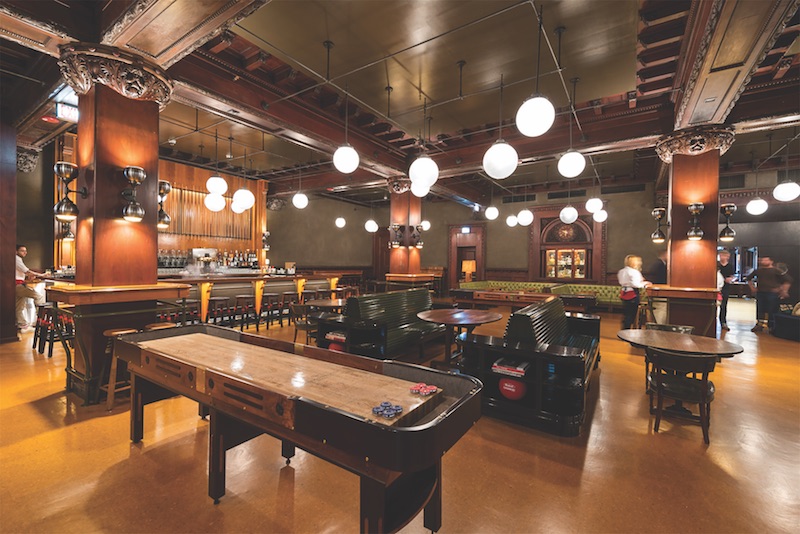 The club, designed by Henry Ives Cobb (1859–1931), exemplified Venetian Gothic architecture. In the course of its restoration the Building Team uncovered treasures that had been obscured by past renovations, such as original walnut herringbone floors and Carrara marble tile hidden under carpeting.

The building, which reopened as a hotel in May 2015, is a celebration of the craft of construction. Master craftsmen set up their workshops on site during the rehabilitation. They restored 18,000 sf of ornamental plaster, 26,500 sf of marble and mosaic flooring, and 32,000 sf of wall paneling and bas relief, not to mention “stalactite” light fixtures in the White City ballroom, which had been painted over in garish colors, sheared off, and hidden by a nondescript dropped ceiling.

The general contractor, Bulley & Andrews, was brought on early in the process to work with the design team. The GC broke down the project into smaller, manageable components and matched superintendents and project engineers to each component based on their knowledge and strengths. The project created 1,000 construction jobs and 500 full-time positions.

The exacting nature of the restoration is evident in the work done to the CAA’s Grand Lobby, which now serves as the hotel’s reception area. Every piece of original millwork in that space was removed, catalogued, and restored. The second-floor Game Room, with its billiards, bocce, shuffleboard, and chess paraphernalia, was restored to its original intent, but now also offers gamers playful fare like duck sausage corn dogs. Guests can also avail themselves of the facility’s gym and loaner bicycles.

The guest rooms harken back to the past, with references to traditional clubrooms of vintage athletic associations. The rooms feature custom-lacquered wooden armoires and bars and a modern take on 19th-century brass beds. The redesign isolates the guest rooms from any noise and vibration emanating from the hotel’s ball courts, bowling alley, bars, and mechanical systems. 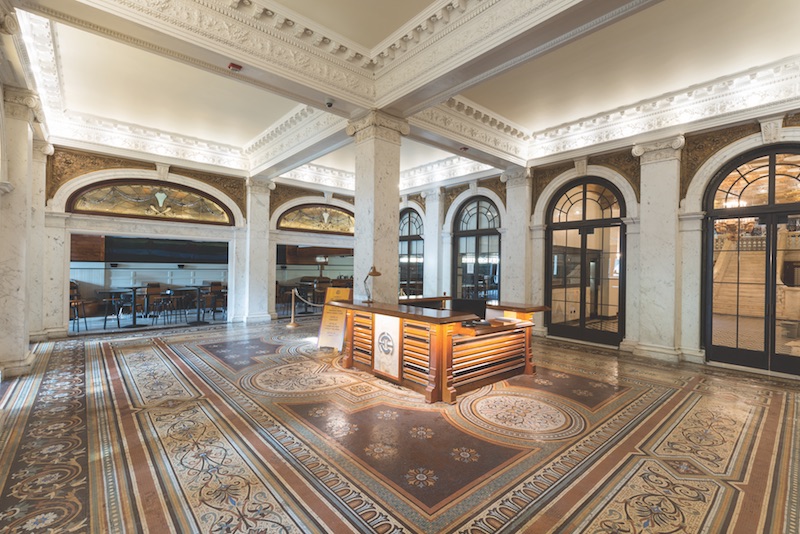 What distinguishes this project from other restorations is how seamlessly it meshes the new with the old. Case in point: a Shake Shack that opened on the ground floor last year. In August, the CAA became the first hotel in the world to offer Shake Shack dinner deliveries to guest rooms.

CAA’s natatorium has been repurposed into a special event space, with steel deck and tile mosaic covering the original pool with a design that mirrors four swimming lanes. A former athletic court has been converted into another event space, with its original mezzanine running track providing a balcony.

The Building Team installed entirely new and energy-efficient mechanical, electrical, plumbing, and A/V systems, and hid them behind intricately paneled walls, above plaster ceilings, and beneath the mosaic floors. The team coordinated with CAA’s energy provider to avoid having to build a new utility vault within the structure.

One of the key components in the MEP upgrade is a condenser water system that captures heat produced by refrigeration and other supplemental cooling systems and transfers this energy to preheat domestic water. The system also provides combustion air for the boiler room in the winter, thus eliminating the need to operate the cooling tower system in the coldest months.

The restoration added 9,674 sf to the building’s 208,893 sf of existing space. Prominent in that expansion is a 6,000-sf, glass-enclosed rooftop deck that sits on a floating deck supported by cantilevered trusses and reinforced columns at the building’s core.

Within that structure, which takes its cue from greenhouse design, is a 4,500-sf rooftop bar and restaurant called Cindy’s, named after the mother of John Pritzker, whose father was the billionaire philanthropist and investor Jay Pritzker. John Pritzker is a partner in Geolo Capital, one of three investor groups in this project. Geolo Capital owns Commune Hotels & Resorts, which operates the property.