The University of Toronto recently completed construction of a new addition to its School of Architecture.  The top floor of the new Daniels Building features an expansive 16,000-square-foot open space designed to function as a studio and study hall.  The space features no interior walls or structural columns.

Towering above the massive space is a very contemporary drywall ceiling designed to replicate wings.  Hyperbolic paraboloid in shape, four angled drywall ceiling slabs gently twist from one side of the space to the other.

Creating the complex framing on which to attach the drywall was a key consideration.  Project designers initially considered metal studs.  However, a number of factors presented potential problems, including the overall size and twist of each ceiling surface.

According to Robert Dell’Elce, Vice President of Nelmar Drywall Company of Vaughan, Ontario, “Once we saw the initial drawings, we had our doubts it could be done with metal studs because of all the twists and turns.”

To find an alternative, the drawings were sent to Armstrong Ceiling Solutions to see if a drywall grid system was feasible. “We were familiar with drywall grid from a previous project and thought it would work here because of the flexibility it offered compared to metal studs,” he says. 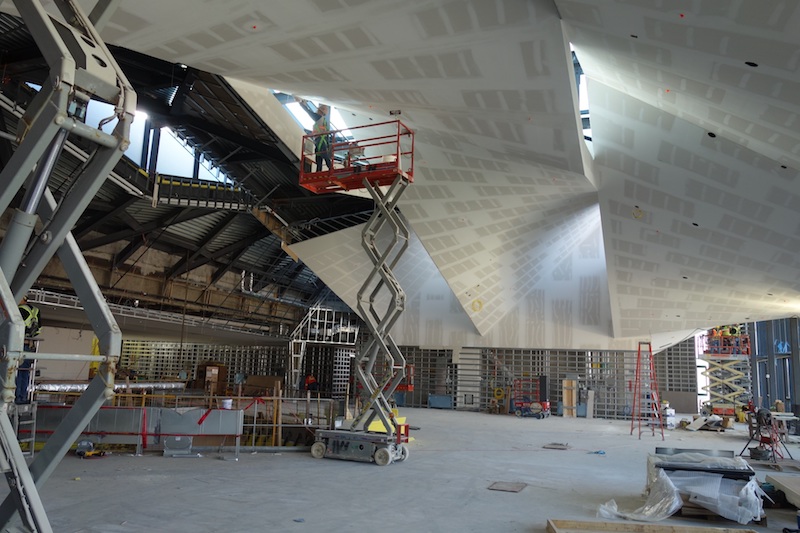 ​The drywall grid system maintained the curvature of the ceiling very well, even without wetting the 5/8” drywall.

In order to ascertain that drywall grid would perform as desired, Armstrong Ceilings created a full-scale mock-up at the local union training center.  “The mock-up showed that the framing was possible using drywall grid and that gave us a level of confidence to proceed,” Dell’Elce says.

Following approval for its use, an initial challenge was the fact that this would be the first time many of the installation crews would be working with drywall grid, let alone on such an unusual shape.  To remedy this, Armstrong Ceilings held on-site training sessions to help ensure a hassle-free installation.  “The jobsite training we received was a huge help,” Dell’Elce states, “otherwise it could have been a nightmare.”

Foreman Chris Morgan notes that the crews learned the technique quickly since “everything essentially snaps together just like normal T-bar grid systems.”  Because of the ease and speed of installation, he estimates the drywall grid system probably installed in half the time as the original steel stud system, significantly reducing labor on the project. 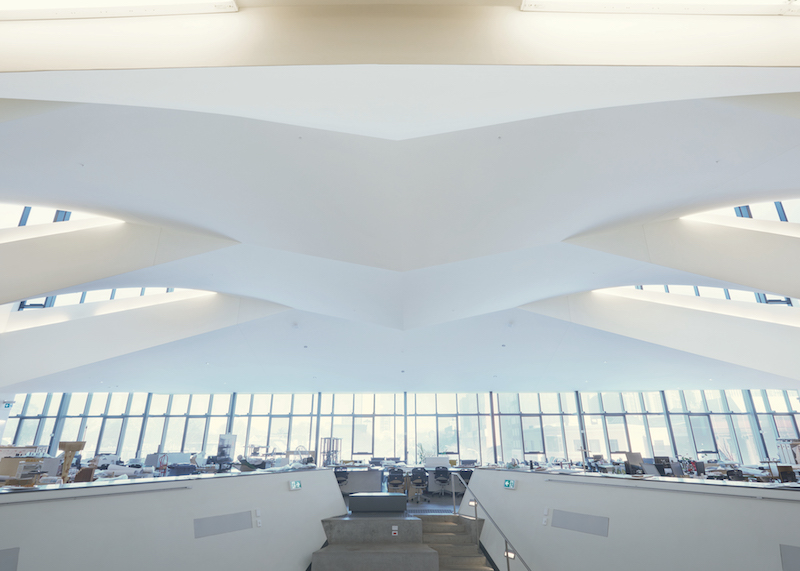 Designed to replicate wings, the angled drywall ceiling slabs gently twist from one side of the space to the other.

Looking back at the project and his first experience with a drywall grid system, Morgan states, “I would use it anytime I can now, especially in curved situations.  I was amazed it worked so well.”

And as far as the future, Dell’Elce notes that the system is definitely increasing in use, stating, “Drywall grid is becoming much more common now as more and more architects become familiar with it.”