THE DISRUPTORS: The Millennial generation is imposing its will on design

What makes Millennials tick? Lots of businesses, AEC firms included, would like to know the answer to that question. That’s because, at 75.4 million strong, the 18–34 generation has just left Baby Boomers in the dust as the largest population group in America, according to the U.S. Census Bureau.

Millennials represent the largest share of the American workforce—more than a third of all workers—and could rise to half the workfore by 2020, according to the Pew Research Center.

Unlocking the door to Millennials’ hearts and minds would give AEC firms a competitive edge in the design and construction of residences, offices, college campuses, retail stores, hotels, and who knows how many other building types.

The problem is that so much of what is supposedly known about Millennials seems, upon closer inspection, to be facile, anecdotal, stereotypical, or contradictory. For example, Millennials are said to be postponing home buying because they’re being squeezed by the $1.2 trillion in student debt they’re carrying. But the National Association of Realtors (NAR) has found that the median per-student debt for GenXers ($28,000) and younger Boomers ($29,100) is actually higher than for Millennials ($25,000).

There’s been a lot of talk, too, about how Millennials prefer renting (especially in urban centers) to owning. That may be true in some cases. Since 2000, according to Curbed, Cleveland’s Millennial population has increased 77%, an influx that has sparked a downtown renaissance: over the next two years, 29 projects will convert commercial space to residential.

But research by the NAR finds that, nationally, Millennials represent the largest cohort (35%) of homebuyers, and, says the NAR, they’re mostly buying in—heaven forbid!—the suburbs. 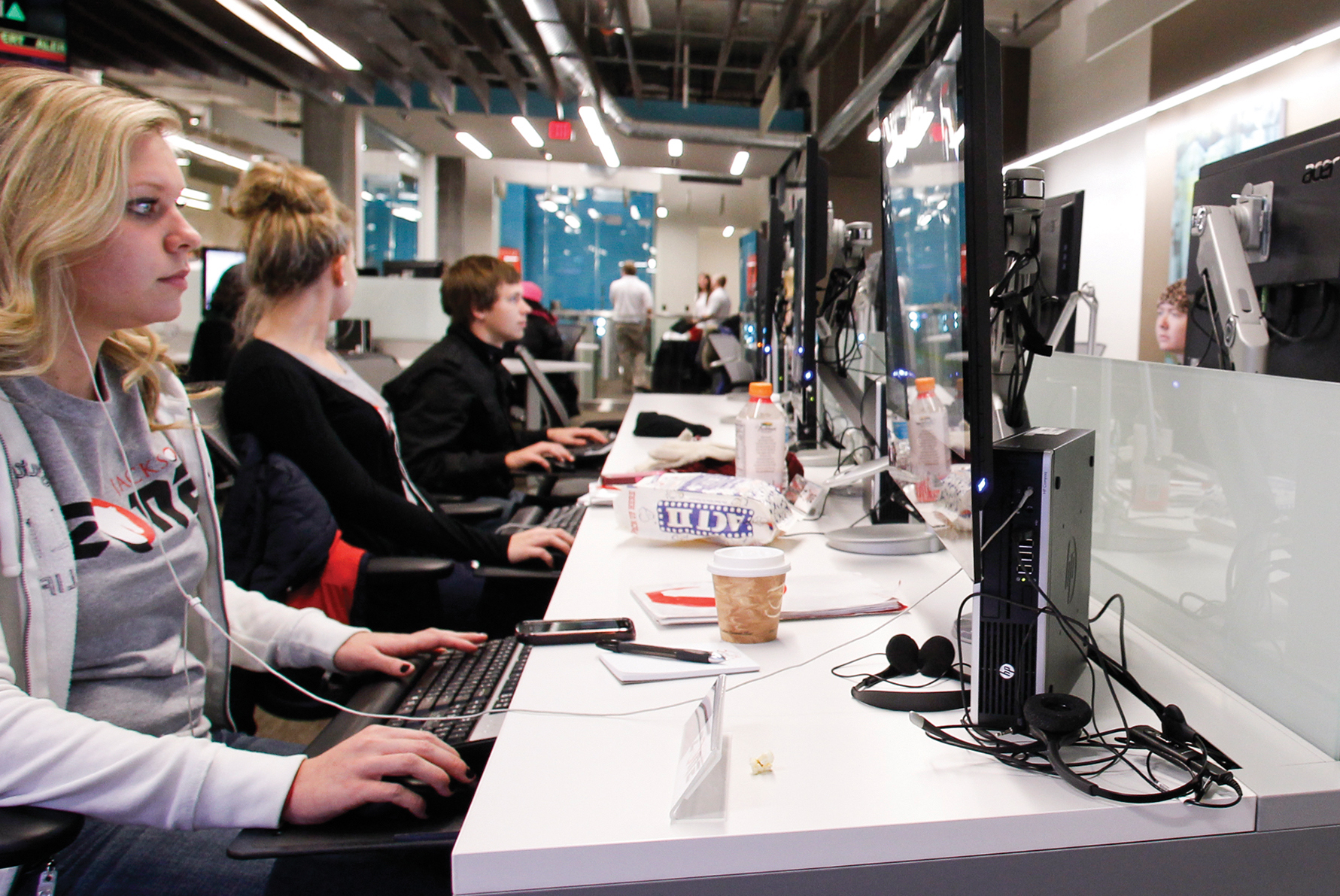 The Zone, designed by Gresham, Smith & Partners, is a corporate center at the edge of the Michigan State University campus, in East Lansing. The client, an insurance company, wanted an environment that would help them recruit and retain Millennials. Photo: Matthew Dae Smith/Courtesy GS&P. Click to enlarge.

Hotels are another sector where Millennials are impacting design. They’re almost twice as likely to travel for business (46%) as Boomers (26%), according to the Global Business Travel Association, so there’s been an explosion of new brands to meet that demand: Vib and Glo (Best Western), Moxy and AC Hotels (Marriott), Canopy and Tru (Hilton), and Hyatt Centric.

They’re offering services that Millennials supposedly demand. Check-in from their smartphones. Emoji room-service menus. Free WiFi. Common areas with games and beer/wine service. Bed headboards that convert into desks. Room lounge chairs with sliding tablet holders. No office-style desks. No tubs, either, but the showers have to be very high end.

At New York’s Yotel (12th Avenue and 42nd Street), just push a button and half the bed rolls up to form a comfy sofa. Want to store luggage? A robotic arm will do that for you.

Of course, Millennials’ favorite lodging brand may not be a hotel. Airbnb, anyone? 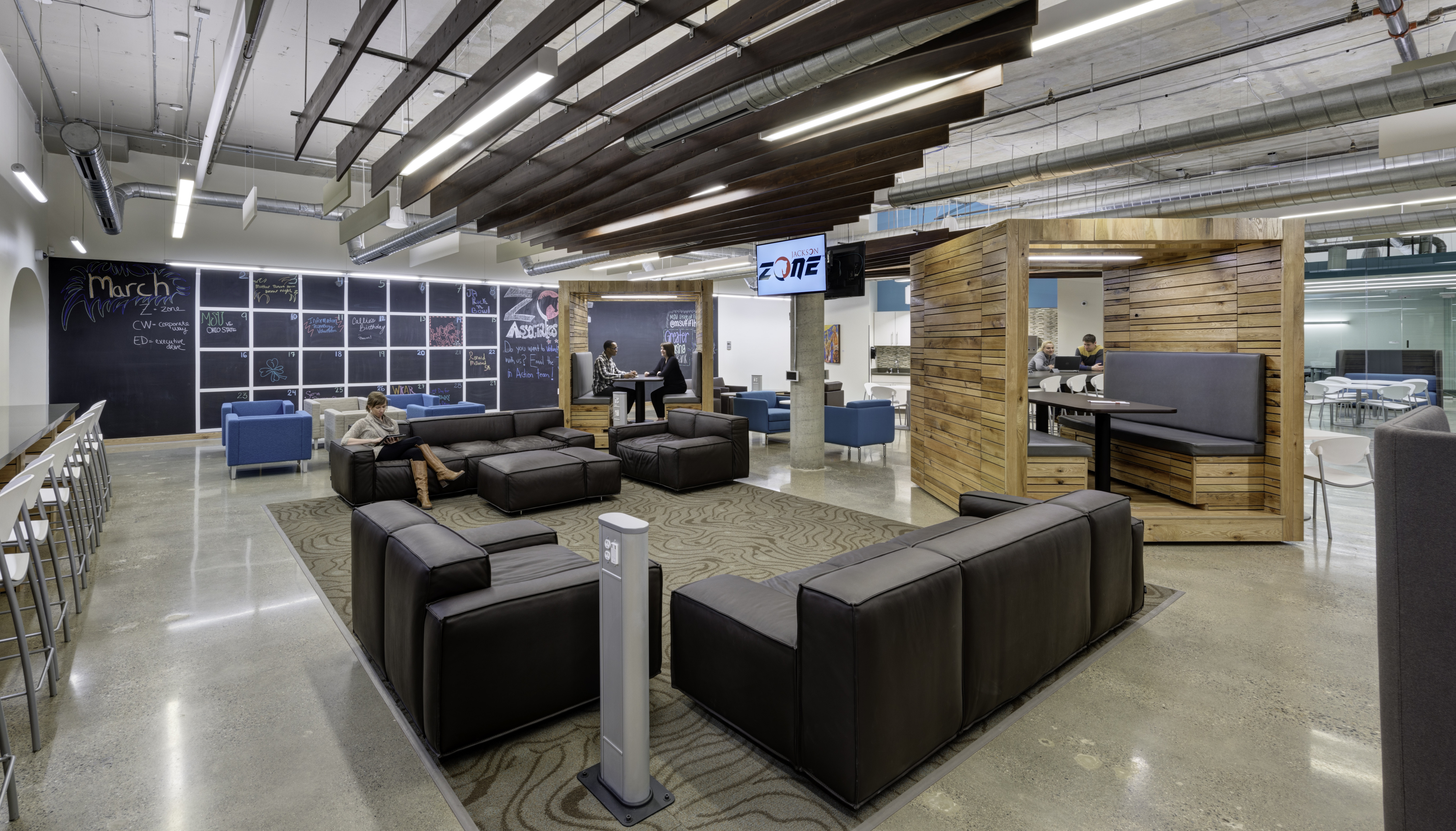 THE NEW DEFINITION OF ‘OFFICE’

Certain differentiating characteristics about Millennials are hard to ignore. As the first generation of digital natives, Millennials prefer technology and social media as their primary mode of interaction with friends, coworkers, and the outside world.

Technology also plays into this cohort’s “Generation Now” reputation for demanding instantaneous—or at least quicker—gratification. A recent Deloitte survey found that only 28% of Millennials say their companies fully utilize their talents. The urge to work for themselves is palpable among Millennials, whose impatience about career advancement without the requisite learning curve or grunt work drives employers and older coworkers nuts. 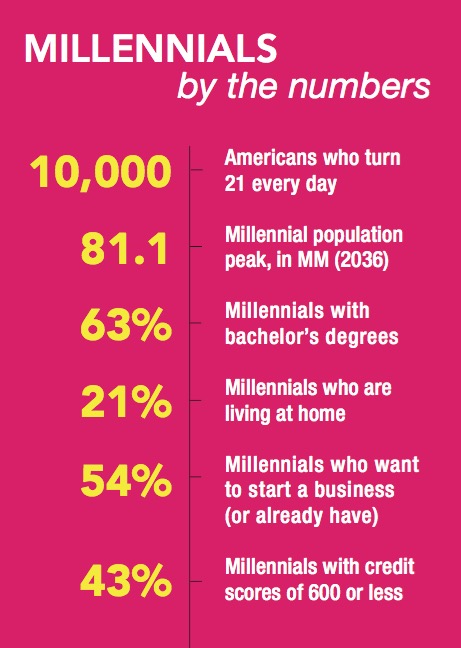 To keep younger workers from walking because they feel unchallenged or underappreciated, more companies are rethinking their employee space management.

The Googlization of the workplace—decentralizing hierarchies; shucking conventional offices for open, collaborative, wired spaces; and acknowledging that the lines separating life and work are dissolving—is real and, in some cases, dramatic.

About 80% of PricewaterhouseCoopers’ employees are Millennials, many of whom told their bosses they wanted more flexibility to work from home. Three years ago, PwC started converting its U.S. offices to coworking spaces. Employees can use proprietary software or a mobile app to reserve a seat or office to work in.

Today, nearly 90% of PwC employees now “hotel,” Bloomberg reports.This shift has allowed the company to shrink its Boston office alone by 18,000 sf. PwC expects to eventually save hundreds of millions of dollars by reducing leased space.

Whether shrinking office space is a good thing for design and construction firms is another matter. Given the clout that Millennials are exerting on workplace patterns, it’s a trend that’s not going to go away soon.