The construction unemployment rate was 6.9% in March, up 1.7 percentage points from the same time one year ago. The construction unemployment rate was 6.9% in March, up 1.7 percentage points from the same time one year ago. Unemployment across all industries rose from 3.5% in February to 4.4% last month, a direct result of the global pandemic.

“So ends the lengthiest expansion in American economic history,” said ABC Chief Economist Anirban Basu. “The expansion was associated with dramatic asset price increases, multi-decade lows in unemployment, persistently low costs of capital and a thriving U.S. nonresidential construction sector. While the March jobs report is horrific, ending a 113-month streak of employment gains, it is clear that employment reports in future months are likely to be even worse.

“What remains unclear is the extent to which estimated construction employment declines are due to mandated suspension of projects in Massachusetts, Pennsylvania, California and elsewhere, and how much of this is due to the emergence of recessionary forces,” said Basu. “Generally, nonresidential construction is one of the last segments of the economy to enter recession as contractors continue to work down their collective backlog, which stood at 8.9 months in ABC’s Construction Backlog Indicator. The need for social distancing renders that statistic less pertinent, meaning that nonresidential construction is susceptible to large-scale job losses immediately.

“While the recently passed stimulus package is massive and helps support the payments side of the economy, economic recovery will remain elusive until the COVID-19-engendered crisis is behind us,” said Basu. “While that is obvious, many people are still looking to compare the current crisis to other episodes in American history, including the Great Recession. As a practical matter, this period defies comparison, and must be understood on its own. Based on what is known, the downturn will be vicious. The good news is that this crisis may finally induce policymakers to fashion and implement a long-awaited infrastructure stimulus package.” 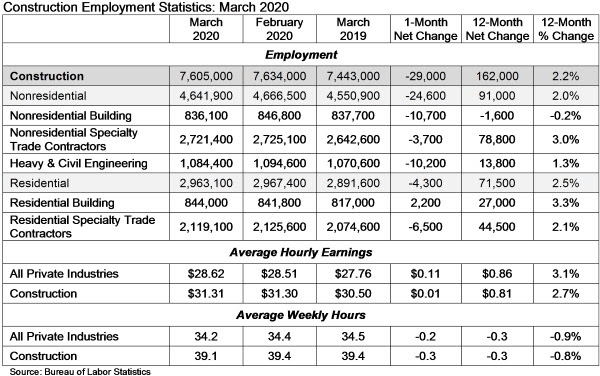 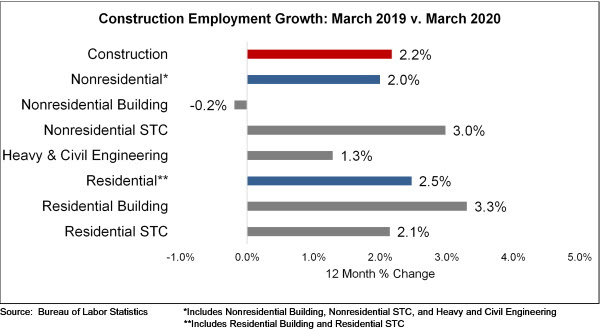