Of the 11 construction subcategories, seven experienced price declines for the month. According to an Associated Builders and Contractors analysis of U.S. Bureau of Labor Statistics data released today, construction input prices rose 0.9% monthly in February and 1.8% in the past 12 months. Inputs to nonresidential construction were up 1% on a monthly basis and 2.7% on a yearly basis. This is the first time that input prices have risen on a monthly basis since October 2018, when prices increased by 0.5%.

Of the 11 construction subcategories, seven experienced price declines for the month, with the largest decreases in natural gas (-25.8%) and unprocessed energy materials (-10.7%). The largest monthly increases in prices were seen in softwood lumber (+4.8%) and crude petroleum (+2.6%).

“Today, the annualized increase in materials prices is less than 2%, despite the data characterizing February,” said Basu. Some of this is explained by the dip in oil prices during the past year, which is due in part to a softening global economy and a significant increase in U.S. oil production. However, other key construction materials prices also have declined during the last 12 months, including natural gas, nonferrous wire and cable and softwood lumber.

“With the global economy continuing to weaken, it is unlikely that materials prices will surge in the near term, despite a still very active U.S. nonresidential construction sector,” said Basu. “It is quite conceivable that much of the monthly increase in materials prices registered in February was associated with unusually severe winter weather in much of the nation. Difficulties involving transportation, for instance, have a tendency to push purchase prices higher. The implication is that the monthly increase registered in February will probably not be repeated in March and April.” 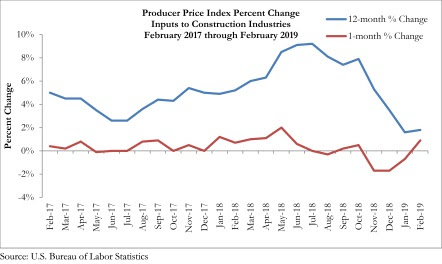