Columbia Grammar and Preparatory School grows with the times

Columbia Grammar School was founded in 1764 as a boys’ preparatory school under the administration of Kings College (now Columbia University). The school separated from Columbia in 1941 and merged with Leonard School for Girls 15 years later. In 1978, the name was changed to Columbia Grammar and Preparatory School. Today, the school serves 1,300 students (pre-K to 12) at its facilities in a historic district on the Upper West Side of Manhattan, near Central Park.

The part of the campus that houses the Lower School (pre-K to grade 4) is made up of seven brownstone townhouses with landmarked façades that stretch along West 94th Street. Several years ago, IBI Group n Gruzen Samton was brought in to consolidate, upgrade, and enlarge this string of buildings and make the connections between them more rational.

The task before the Building Team on the  design-build project was not easy. The site was tight, with limited space for development outside the existing building footprint. New construction would have to take place largely within the historic structures. Floor elevations varied between the seven brownstones, making internal circulation a nightmare. Already tight existing spaces would have to be reallocated to meet expanded program demands, such as enhanced recreation facilities and new science classrooms.

There were also civic considerations: zoning appeals would have to pass through the city’s Landmarks Preservation Commission and the Board of Standards and Appeals. There were concerns about potential code violations in the brownstones. Neighbors in this extremely upscale area of the city would be watching carefully for any changes that might block their views or negatively (in their eyes) change the character of the buildings or streetscape.

The Building Team faced these concerns head on.

To make the egress and circulation system more accessible and code compliant, the Building Team replaced the existing fire escapes with a system of exterior walkways at the back of the buildings. These loggia-like paths slope along the façades following the natural elevation differences between the building elevations.

A new elevator tower clad in glass fiber–reinforced concrete panels in a compatible red-brick color provides ADA-compliant access to all floors and the roof playground. The Lower School was provided with an enhanced connection—fewer steps and a widened corridor—to the West 93rd Street side of the campus.

In the rear yard, a new 2,000-sf gymnasium was sunk four feet below grade to reduce its visual and spatial impact. A fully glazed wall, which allows ample sunlight into the gym, peeks out from beneath a double-terraced parapet with extensive floral landscaping. Students can use a play surface outside the gym or another on the garden roof. 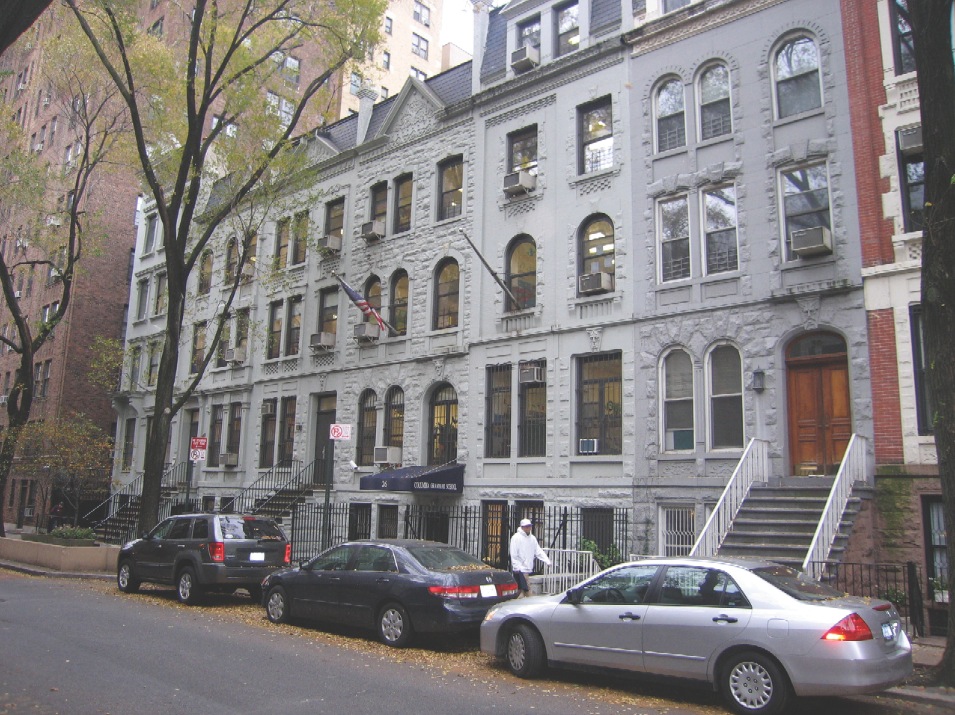 The battleship-gray paint of the school’s exterior was stripped to reveal a festival of brownstone façade treatments along West 94th Street.

The roof of the three brownstones at 22, 24, and 26 West 94th Street was lower than the other roof sections. Here, the Building Team put in a single-story penthouse addition for two new science classrooms and a secluded rooftop science-learning garden. The science rooms look south above the exterior walkways and play spaces below. They were purposely hidden from view from the street to satisfy neighborhood concerns.

The Building Team took aesthetic considerations to heart. Somewhere along the way, the façades on 94th Street had been painted a dusky shade of battleship gray unlike anything else in use on the block. The gray paint was carefully stripped from the façades. Underlying stone, stucco, and brick and mortar colors were surveyed and catalogued to create matching repair materials that would be indistinguishable from the original materials.

Structural elements on the exterior stair and open corridor system were painted with what the designers call a “gentle green” to provide relief from all the monochrome red that covered so much of the structures.

Significant architectural details, such as moldings, quoins, and textures, were meticulously preserved. Cornices were surveyed for damage and restored using deteriorated scrap material that was molded and formed to produce replica components.

The old entrance (left) was too small. It was moved to the adjacent double-size bay (right) and widened.

Regulatory approvals were yet another can of worms. IBI Group n Gruzen Samton led the way for the project to secure OKs from the Landmarks Preservation Commission and the Board of Standards and Appeals. The approved design called for the addition of two floors at the lower and upper roofs of the building and the addition of one floor to the West 93rd Street setback. The additions complied with all applicable codes, while avoiding the need for wholesale changes to the existing buildings.

The work at Columbia Grammar and Preparatory School continues. After a seven-year effort, IBI Group n Gruzen Samton recently helped the school win zoning and landmarks approval for an extensive renovation and two-story addition to the existing 1994 space, which will lead to the creation of a new middle school facility. 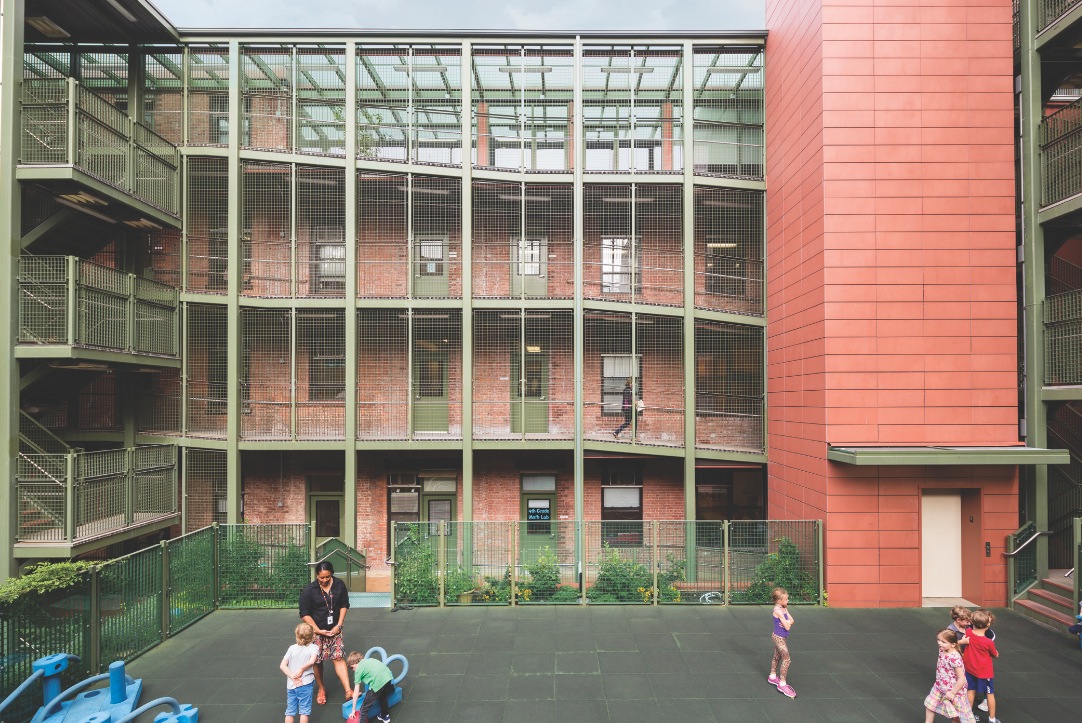 Exterior walkways and a playground (above) were added, as were new science classrooms (below). 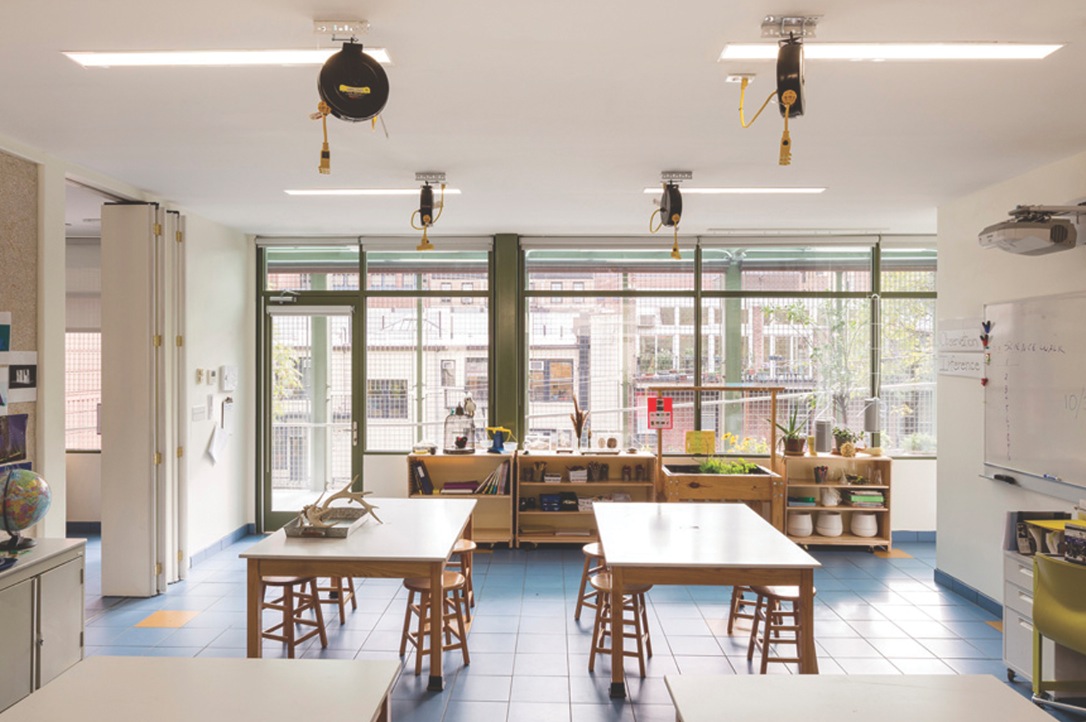