A National Historical Landmark listed on the National Register of Historic Places, the Victorian Gothic structure, designed by architect Samuel Hannaford (1835–1911) and completed in 1878, takes up a full block across from Washington Park in the historic Over-the-Rhine neighborhood.

But while Washington Park and the neighborhood had seen extensive reinvestment in recent years, the pride of the Queen City had not undergone a serious refresh in half a century; nor was it ADA-accessible.

To reestablish the venue as a vibrant anchor in the city, Cincinnati Center City Development Corporation (3CDC) and key stakeholders (notably the Cincinnati Symphony Orchestra) developed a renovation strategy with nine goals. Key among them: restoring architectural integrity, improving accessibility, upgrading the Springer Auditorium to meet the technical requirements of the five in-house performance companies (Opera, Pops, Orchestra, Ballet, and May Festival), and connecting with the neighborhood—all to be done under the purview of the Ohio State Historic Preservation Office and the National Park Service.

Executing the plan would not be easy. What should have been a 24-month schedule was cut to 16. Nearly half the budget—$48 million of $102 million—was earmarked for obligatory infrastructure improvements. That left project architect Perfido Weiskopf Wagstaff + Goettel with no choice but to engage in “skillful triage” to identify the most critical elective improvements, based on the significance to the hall’s original design.

Spaces and elements that reinforced the hall’s “character” were repaired or restored. “Sympathetic detailing” was applied to areas deemed to have less significant architectural quality. “Found” spaces would be contemporary in their design and reconstruction. 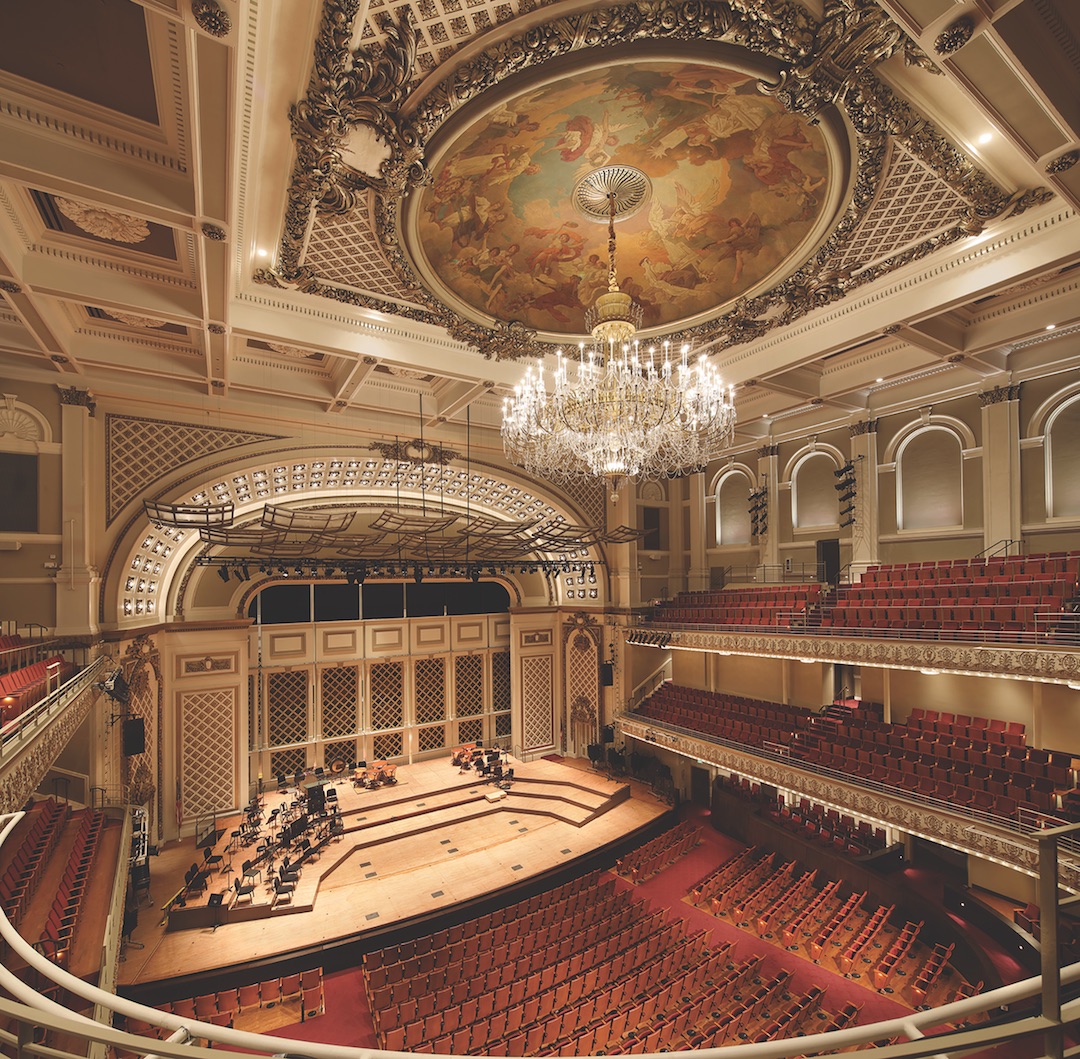 Cincinnati Music Hall now has one of the world’s largest and best-equipped stages. Scenery and lighting are suspended from a 90-ton steel-grid framework. An extra orchestra pit allows the stage to be extended another 13 feet. Photo: Magnus Lindqvist/GLINTStudios.

MERGING PAST AND PRESENT

The most essential restoration went to the façade, many of whose windows had been bricked over. Window manufacturer Marvin Architectural custom constructed 90 of the 103 windows on the main façade. The project team restored the polychromic brick design, whose black detailing had been all but wiped out by sandblasting.

Three arched transom windows below an iconic rose window at the front of the hall were restored, based on a single photo from the 1950s. A nonhistoric canopy was removed, creating an ADA-accessible entrance.

Aluminum and glass doors and partitions that had separated the North and South halls from the double-height Grand Foyer were removed, as were character-defining balconies, railings, supporting columns, and marble flooring. New torchiere lamps that highlight the foyer’s coffered ceiling were added. EverGreene Architectural Arts applied a new paint scheme.

The main event space, Corbett Tower, underwent “the purest and most dramatic architecturally restorative part of the project,” according to PWWG. The tower’s faux walls and a flat lay-in acoustical ceiling were demolished, revealing 14 feet of coved ceiling and bringing the room to its original 30-foot height. Extensive AV capability and a bar were added to allow for social events.

Demolition work exposed intricate stenciling from the 19th century on Corbett Tower’s vaulted ceiling and walls. While the design team initially thought that the Victorian Gothic look might be too bland, a closer analysis revealed a vivid turquoise and golf leaf palette.

Capacity in Springer Hall, the main performance space, was right-sized to 2,200–2,500 seats (from 3,300) to improve the acoustics. Side and back walls were pulled in and rounded at the back of the orchestra and balcony levels. Aisles and seats were widened; the hall and balcony were reraked. Three-D visualization was used to test audience sightlines.

Fifteen steel-and-glass “cloud” reflectors installed above the stage enable the acoustics to be fine-tuned for each performance. The stage itself features a 90-ton steel-grid framework from which scenery and lighting are suspended. An additional orchestra pit allows the stage to move forward of the proscenium by up to 13 feet.

The coffered ceiling, the 1905 “Allegory of the Arts” mural in the dome, the proscenium, and the brass and crystal chandelier were all cleaned and restored.

New floor plenums now deliver heating and cooling with minimal noise interference. The entire backstage area was consolidated onto a single level, making it easier for performers to get from one side to the other. 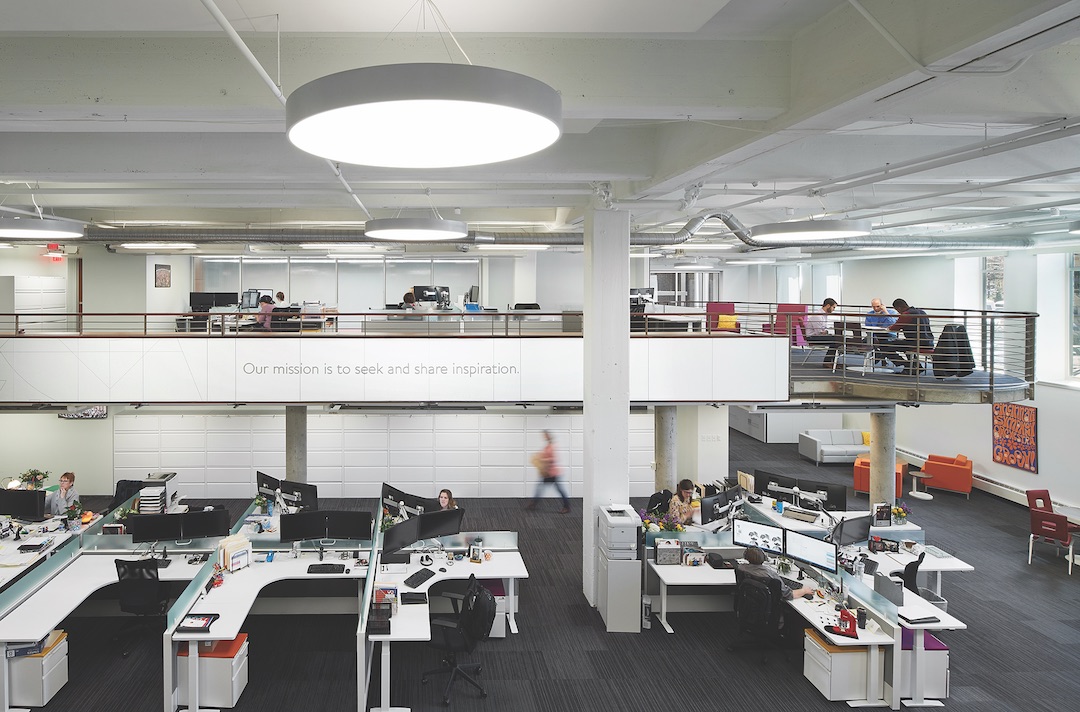 Modern bi-level office space was created for staff of the Music Hall and the Society for the Preservation of Music Hall. Before the renovation, they had to work in dark, dingy spaces. Photo: Magnus Lindqvist/GLINTStudios.

A new, larger space for rehearsals, performances, and events was created from found space on the second floor of the North Hall. The 100 or so employees of the orchestra and the Society to Preserve Music Hall moved from their cramped, windowless offices into modern, daylit space in the South Hall.

The former carriageway for the South Hall was covered and repurposed for Taft Suite, a lounge and reception area with modern detailing and finishes. Its masonry was left exposed to leave clues about the building’s history.

The reconstruction was completed on time, despite 10% more scope being added during the construction phase and three weeks added for asbestos removal.

Messer Construction hosted 50+ tours during construction. More than 10,000 local residents came to see the finished project at an open-house weekend.

The best news of all: The National Trust now lists Cincinnati Music Hall as a “saved” structure. 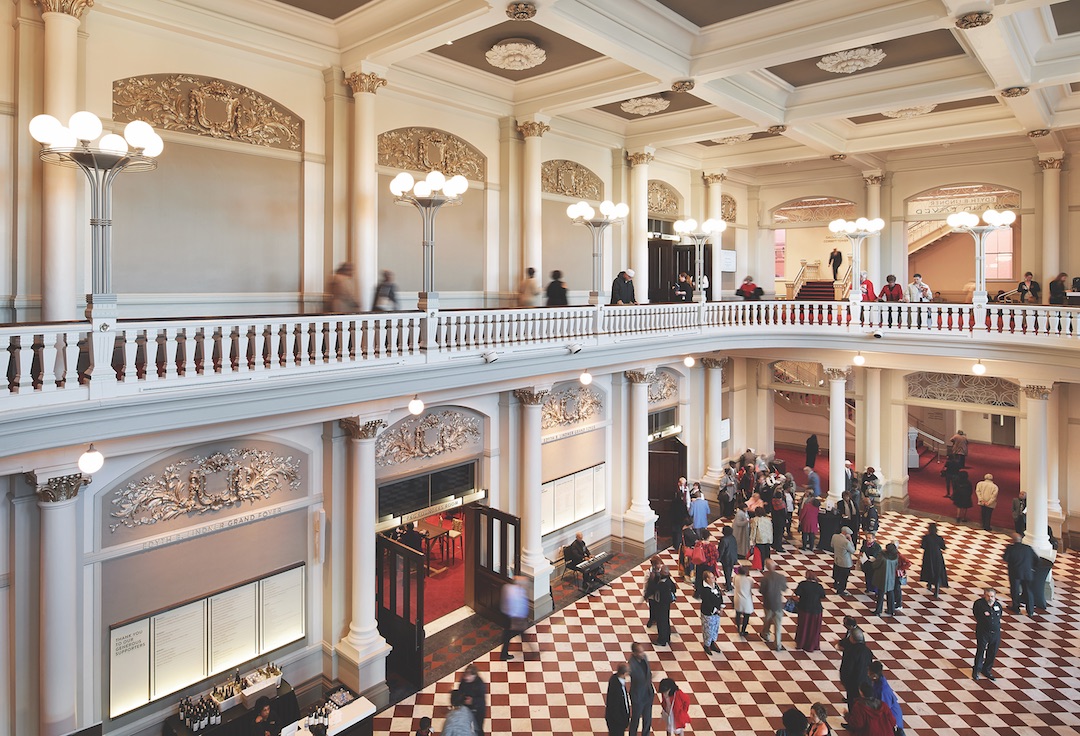 In the Grand Foyer the balcony and railings, columns, and marble floor were restored. New torchieres were installed at the mezzanine level. Photo: Magnus Lindqvist/GLINTStudios.