The renovation of the Charles L. Tutt Library followed goals set out in a long-range development plan regarding open space and the transition between interior and exterior spaces. Photo: Steve Lerum Photography.

The expansion of colorado college’s Tutt Library doubled its size to 94,000 sf, making it likely to be named the nation’s largest 24/7 net-zero academic library. The project reinforces the college’s commitment to achieving campus-wide carbon neutrality by 2020.

Designed in Brutalist style by Chicago architect Walter Netsch (1920–2008), Tutt Library opened in 1961. Aligning the floors of the two new additions with those of the existing concrete structure and accommodating new systems—HVAC, sprinklers, lighting—proved to be the most nettlesome problem for the project team.

The west-side expansion added a formal entry plaza and three new entrances to the first floor, plus a Data Viz Lab, flex space, and entry lounge. The east-side renovation opened up the circulation desk and created a technology space with a GIS lab and tech “sandbox.”

The second-floor expansion created a flexible event space that opens, via a glass NanaWall, onto an outdoor terrace. The library’s research center, reimagined as the Colket Center for Academic Excellence, retains Netsch’s double-height volume and reenergizes the space with color and technology. The eastern addition provides new space for library administration.

The third-floor expansion added a café and outdoor terrace (with views of Pikes Peak) and extended an existing concrete slab for an overlook that doubles as a study counter.

The fourth-floor addition opened up a spacious reading room with floor-to-ceiling glazing and an outdoor terrace. A 115-kW array of 318 solar panels resides on the roof and off campus. Eighty 400-foot-deep geothermal wells were drilled in the campus’s restored Armstrong Quad.

Net-zero confirmation is scheduled for next fall. 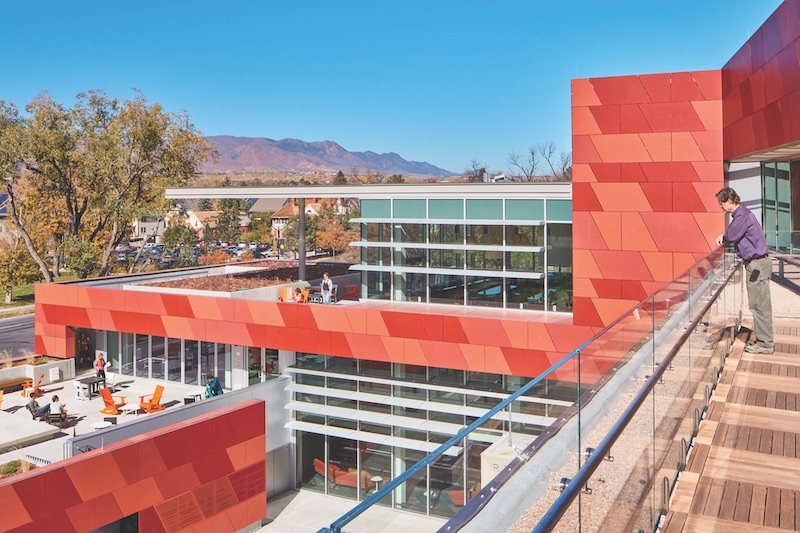