Unlocking innovation in the government workplace

Not surprisingly, the technology industry rated highest on Gensler’s innovation scale. Government rated lowest. Governments are not necessarily looking to be on the “cutting edge” of innovation. After all, they are using taxpayers’ dollars and so do not have the same risk-reward profile when it comes to trying new things as competitive private sector firms.

But innovation is synonymous with creativity and problem-solving, and governments are definitely in the problem-solving business. As much as in any institution, government agencies need to be constantly finding ways to meet challenges, whether a public health menace, sub-optimal education outcomes, a redevelopment need or a foreign policy dilemma. Governments are also in the service delivery business. As demographics change, finances fluctuate and technology evolves, they need to keep up with and hopefully get ahead of the waves of change. Only by evaluating obstacles and developing new means of service delivery—in other words, by innovating—can governments hope to meet the changing needs of their constituents. 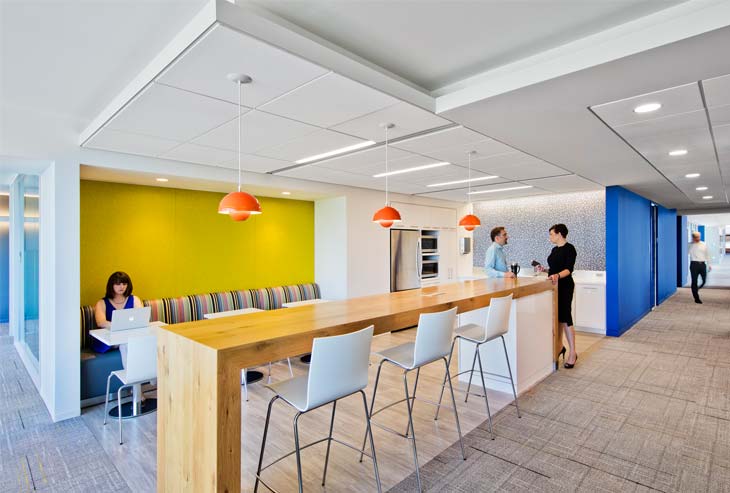 Government work settings ranked the lowest in their effectiveness across the four work modes: focus (individual) work, collaboration, socializing (informal gathering that fosters trust and teamwork) and learning. What specifically about the government workplace is getting in the way?

Gensler’s research found that a choice of work settings is the largest single contributor to employees feeling that their workplace fosters innovation. The ability to move around the work environment and perform tasks in different settings promotes creativity. Government workers report the lowest levels of choice of any industry, and they rarely work from anywhere but their assigned seat or the formal meeting room. That lack of choice ends up interfering with both focus and collaborative work, and cuts down the sense of empowerment that motivates workers. The most innovative environments are those that foster both creative group work and creative individual thinking and provide spaces for both.

Gensler has extensive experience evaluating, programming and designing workplaces for governments at all levels in the U.S. Our overriding observation has been that legacy government workplaces tend to be uni-dimensional: either predominantly closed offices with meeting rooms that are not enlivening, or predominantly open work areas with few focus rooms and inadequate meeting room space. In those legacy spaces, we rarely see a good mix of spaces or the café/pantry areas that double as informal meeting spaces and that are often a hallmark of creative offices.

Led by the U.S. General Services Administration, government workplaces are beginning to offer the choice of settings that will support innovation and enhance workplace performance. In its groundbreaking space planning guidance, Workplace Matters (2006), GSA showed the way to a more effective and efficient federal workplace. Gensler was one of the prime consultants for that study, which foretold the benefits of providing choice and transparency. Gensler also was the interior designer for the renovation of GSA’s own Washington headquarters which has become a model for government workplace transformation.

We see the concepts pioneered by GSA increasingly making their way into state and local government space planning guidelines. And we look forward to seeing the innovation needle move in Gensler’s next Workplace Survey.