Under, over, through: Reinventing spaces under elevated infrastructure

To borrow a line from Roman Mars on The 99% Invisible, “I’m what you’d call pro-infrastructure.” Usually this would refer to my fascination with trains, sewers and mass transit, and all the ways we move people and connect things. Usually I am in strong support of removing highway infrastructure that divides cities and leaves a rift in the urban fabric. But for today, let’s step outside of the usual and take a different vantage point—a vantage point that appreciates the unique moments that result from overhead infrastructure in the built environment.

Elevated highways, rail lines, and freeways create constrained spaces beneath them. Underneath the rumbling cars and screeching trains is a place with little perceived value. “Tear it down and redevelop” is the rallying cry of many urbanists. But what happens when we start to activate the space beneath the infrastructure? We can create unique environments so strongly rooted in their sense of place that if you were to lift off the infrastructural lid, the place would cease to exist.

"Many of the intervention strategies focus on 'synergies with city initiatives.' Ideas include reclaiming the ground plane for mitigating runoff from the road above, providing taxicab electric vehicle charging hubs, and reimagining the corridors beneath train and vehicular infrastructure as vibrant corridors for pedestrians and cyclists."

Many European cities, longer accepting of the presence of infrastructure in the midst of urbanism, have found creative ways to absorb the infrastructure and sew it into the city fabric. Paris, London, and Berlin—and many others—boast the success of tucking small shops, markets, and maker spaces under the arched trestles of 19th century train viaducts. In Denmark and the Netherlands, firms such asNL ArchitectsNio Architects, and the renowned Bjarke Ingels Group (BIG) embrace transportation infrastructure as it cuts through urban environments, using it to sculpt iconic public spaces.

These strategies are finally finding their way across the Atlantic to take root in growing U.S. urban areas, keen to expand their city fabric while maintaining existing transportation infrastructure. In some instances, the exploration of developing a public space from existing infrastructure is spurred by initiatives to preserve and repurpose that infrastructure. Other times, it is a lack of initiative to stray from the status quo that inspires redesign and repurposing of these forgotten spaces.

In New York City, the Design Trust for Public Space “explored how these atypical, multijurisdictional public spaces beneath and adjacent to elevated infrastructure could be transformed from a blighting influence to valuable community assets.” Their explorations—titled Under the Elevated and recently released in a publication of the same name—took on 700 miles of New York’s elevated infrastructure, cataloguing the existing spaces and proposing strategies to breathe life into the ‘el-spaces’, reconnect disjointed communities, and provide new amenities in old, forlorn spaces.

Many of the intervention strategies focus on “synergies with city initiatives.” Ideas include reclaiming the ground plane for mitigating runoff from the road above, providing taxicab electric vehicle charging hubs, and reimagining the corridors beneath train and vehicular infrastructure as vibrant corridors for pedestrians and cyclists. The most compelling result of the “Under the Elevated” study is the degree of realistic implementation in the proposed strategies. While the interventions don’t push the envelope of expected uses, the partnership between the Design Trust for Public Space and NYC DOT resulted in a catalogue of feasible solutions, ripe for implementation and cross-pollination with on-going, funded citywide initiatives. 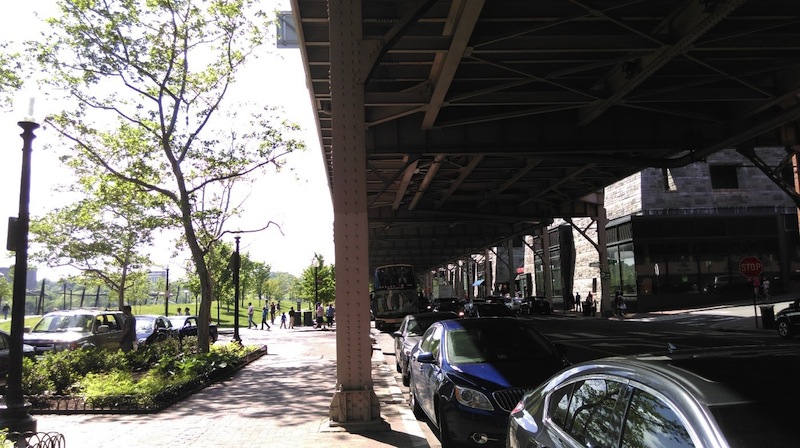 The injection of activity and public spaces around urban infrastructural elements can turn the tide of public opinion. For many years there were movements and petitions to tear down Washington DC’s Whitehurst Freeway, and reconnect historic Georgetown to the waterfront. From 2008-2010 a new waterfront park emerged, its spacious, activated lawn laid out in front of the linear room shaped by the Freeway as it parallels over K Street. Since the creation and marked success of the Georgetown Waterfront Park, talks of removing the Freeway have subsided. Instead of posing as a barrier, the freeway’s elevated structure creates a counterpoint and backdrop to the park. It offers an intimate moment in the city, where one feels sheltered before stepping from its shadow.

Perhaps the right interjection of public space can turn the tide in Toronto, as well. A recent political battle over Toronto’s Gardiner Expressway generated several creative solutions to embrace the existing infrastructure and design spaces beneath the highway, furthering urban growth at the ground plane as it stretches towards the rejuvenating waterfront. Competing submissions by select teams proposed creative solutions to Improve, Replace, or Remove the elevated freeway. James Corner, OMA, West 8, BIG, and Diller Scofidio + Renfro were among the competing teams, each assigned a specific solution to pursue. The submissions from BIG and Diller Scofidio + Renfro addressed the Improve condition, illustrating innovative ways to integrate the existing Expressway with the growth of Toronto’s core and waterfront. Both entries weave public space over, under, and through the infrastructural barrier, connecting new buildings comprised of tiers of public space while responding to the ground plane, highway level, and rising towers.

As more grassroots interventions unveil the potential of spaces beneath elevated infrastructure, and conservative spending promotes the maintenance and reuse of existing infrastructure, the generation of creative design solutions for ‘el-spaces’ is becoming more mainstream. For Under the Elevated, the Design Trust for Public Space partnered with NYC DOT. The City of Toronto commissioned the ideas competition for the Gardiner Expressway. After spending decades on Boston’s Big Dig, removing the elevated highway structure that cut through downtown, MassDOT has created the “Infra-Space” program to identify potential redevelopment opportunities under elevated structures.

This might be driven by several factors: a desire to extend the life of transportation infrastructure, closely tied to lack of funds to recreate the Big Dig everywhere, and a realization that embracing infrastructure can create cool spaces that mitigate the rift in urban fabric. These built projects, proposed ideas, and growing trends are a testament to the enriched spaces we can create when we strongly desire to reanimate a place. Instead of removing the infrastructure that impedes traditional development, we find creative solutions that embrace the uniqueness of that space and invent something new. Anyone can remove infrastructure and create developable value. It takes greater creativity to deliver value in the fragmented light and the shadow of structures pulsing overhead, where convention sees none.

Access to health and wellness services is a vital part of any conversation about community resilience.