Let’s start with an admission: the authors share great memories of hanging out at our local mall with friends in high school. For David, this meant the early 1960s—a couple of years before the dawning of the Age of Aquarius, and malls represented an exciting opportunity to spend time in a place that was all about a shiny future. For Jason, this meant the 1980s—the Age of Aquarius was long gone—and malls had matured into the social heart of the community, a place where everyone spent time.

Flash forward to 2021 and one of those malls is undergoing a $1 billion mixed-use retrofit while the other is a vestige that barely recalls its glory days. A full quarter of America’s remaining 1,000 malls (already down from roughly 1,700) are expected to close within the next 3 to 5 years. This transition represents far more than the loss of teenage memories and places for communities to gather, it also represents a painful loss of jobs and local tax revenues.

Case in point—Flemington, New Jersey, where we are planning for the revival of an historic downtown and Main Street. Closing the local Liberty Village Outlet Mall—the first outlet mall in the US—has eliminated competition with the Borough’s historic Main Street. But for Flemington, and every community that hosts a dead mall, this story carries a more urgent message. A site once assessed at $300 million, and the Borough’s largest taxpayer, is today assessed at $3 million. Hundreds of thousands of weekend visitors, drawn by the mall every year, have vanished along with almost $30 million per year in annual real estate and sales tax revenue. 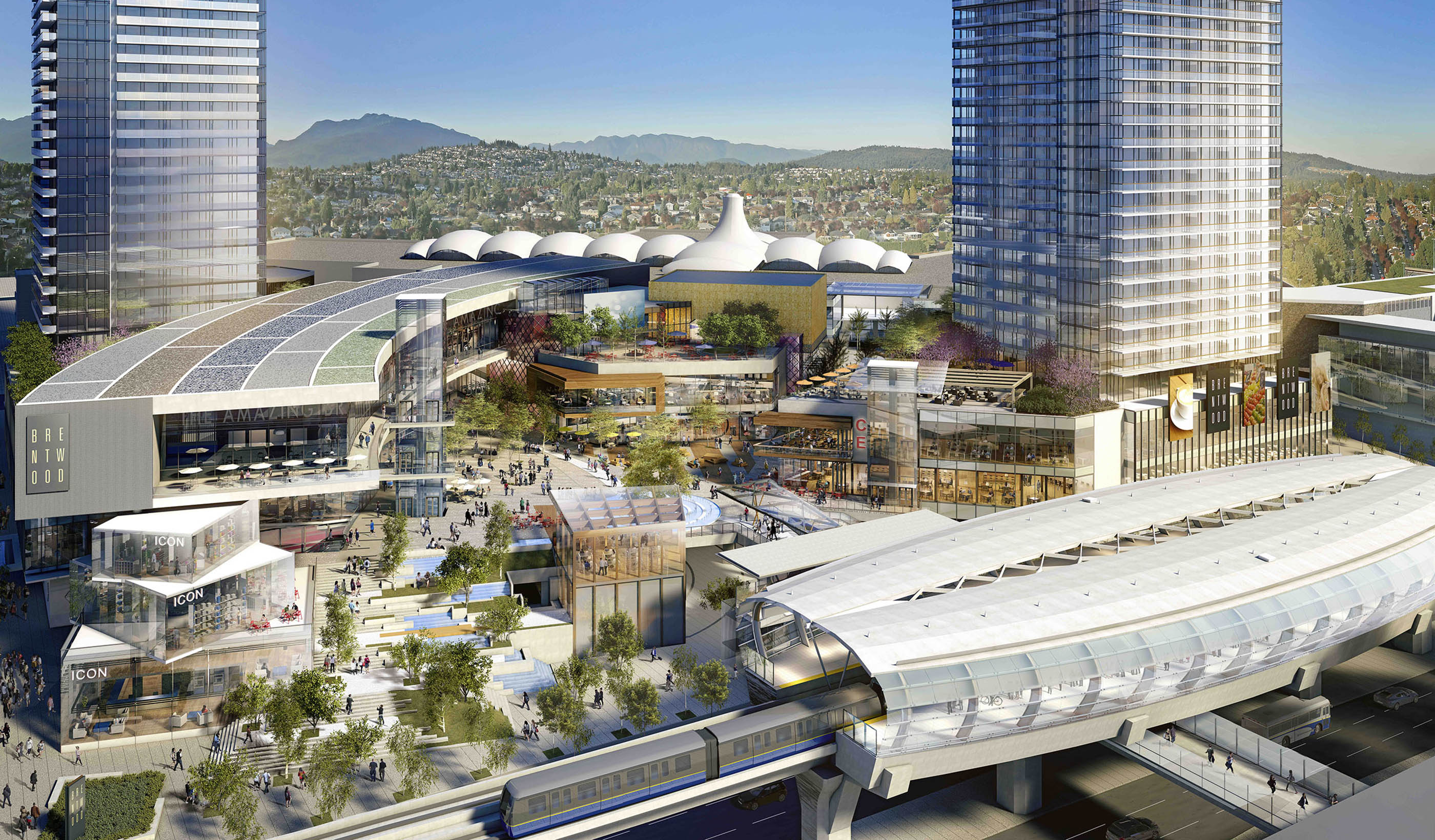 The Brentwood Mall in Burnaby, British Columbia, was turned into a mixed-use community after its purchase in 2008.

Yet, for Flemington—along with communities across North America—the death of a mall has unlocked an unprecedented opportunity. Reimagined, malls that were once economic, fiscal, and social engines for their communities can play a still valuable role going forward.

Once-thriving Liberty Village represents a large site that has in effect been land banked—held aside for future redevelopment. Today this large site, still under single ownership, represents a blank slate and a once-in-a-generation opportunity for Flemington. It can adapt its downtown, and the entire community, to rapidly changing demographic, economic, and technological trends that offer a new era of livability, prosperity, and resilience.

Before we unpack these opportunities, it is critical to acknowledge the impacts that COVID-19 has—and has not—had on the issues surrounding reimagining malls. The pandemic has accelerated some trends already well underway—for example, the devastating impacts of online shopping and growing wealth disparities on strip centers, malls, big box centers, and other forms of auto-oriented retail—and, of course, the growth of virtual work. At the same time, the pandemic has also accelerated interest in expanding the availability of and access to sidewalk dining, bike lanes, access to nature, and similar forms of urban amenity.

With all that said, the pandemic has not changed the transformative demographic and economic fundamentals that were firmly in place before the arrival of COVID-19 and will remain in place after vaccines enable us to move into the post-pandemic era.

In recent years, the share of new households without children has grown dramatically, reversing the previous flight to single-family subdivisions. For the next two decades, even in regions with stagnant or slow population growth, the demographic shift toward a “new norm” in which singles and couples without kids (in the home) will dominate household growth and produce unprecedented housing demand for walkable, urban, higher-density, amenity-rich environments.

At the same time an aging US population is spurring a growing shortage of skilled and educated workers. CityLab has observed that communities are competing for this increasingly scarce talent, which overwhelmingly chooses to live and work in places that celebrate their lifestyles—walkable, mixed-use, amenity-rich, and denser urban places—the same places toward which a changing housing market is increasingly driving investment.

Jason recently completed a study for NAIOP’s Research Foundation, Repurposing Retail Centers: Profiles in Adaptation, Repositioning and Redevelopment. Below, we highlight some of the case studies in this report as well as projects planned and designed by our team. These profiles demonstrate the significant value gained by taking advantage of the new opportunities unlocked by the changing times described above—while suggesting very different outcomes, for example: 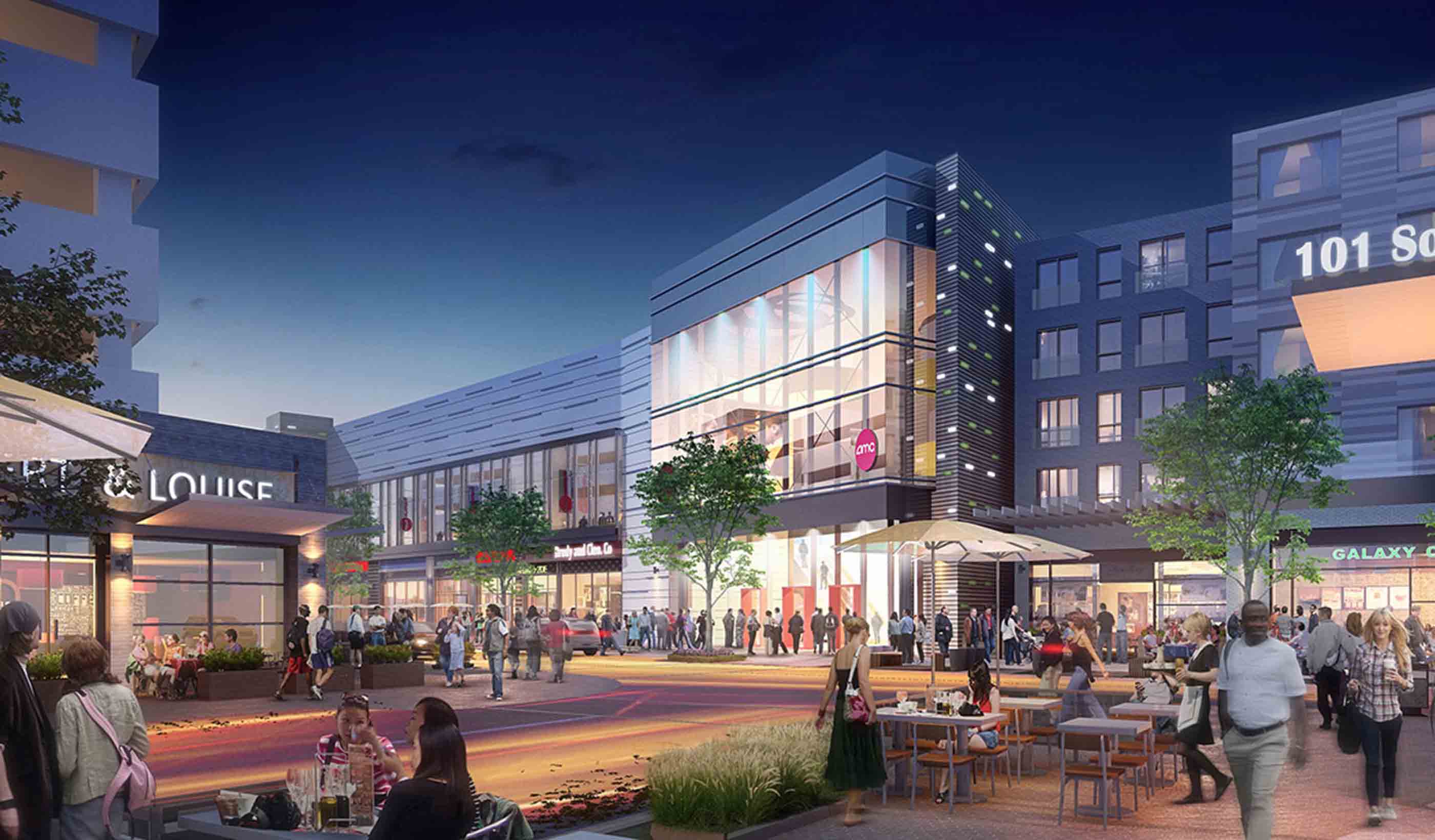 The South Bay Mall in Boston, Massachusetts, is being transformed into a lively, mixed-use community. 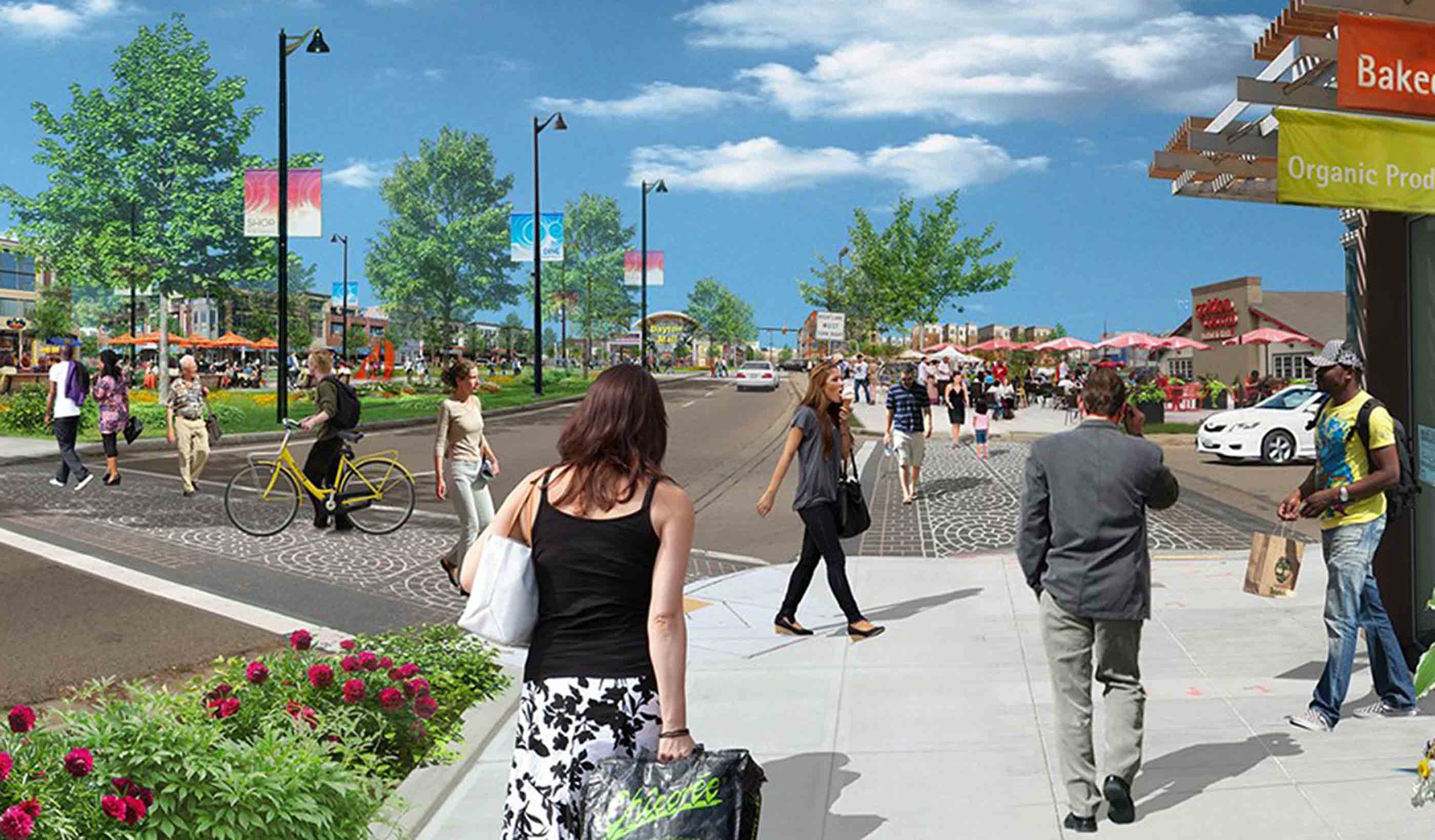 The Dayton Mall in Dayton, Ohio, took a declining strip commercial development and adapted it to meet the new needs of shifting demographics.

May the renaissance of the American Mall begin

So, how we do we translate these observations into lessons for unlocking a new era of opportunity from dead and dying malls? We start by relying far less on auto-oriented retail and office space.

Going forward, we need to turn to a new set of tools that focus on mixed-use redevelopment, compact critical mass, walkability, complete streets, and nature. For example, creating a critical mass of lofts and townhouses can serve as the foundation for transforming a dead mall into a vital new center of community—as a rule of thumb, roughly 1,000 units of new housing within a 5-minute walk can bring a lively new retail-lined “Main Street” to life. There are, of course, other options, but whether or not it is the star, housing can play a critical role in any future scenario. Redeveloped into amenity-rich, walkable, mixed-use centers, mall sites can help attract and retain talent—and the jobs, investment, and taxes that follow this talent—to its host community. And going forward as mobility paradigms shift, the need to provide parking will play a far less significant role in shaping development.

Each time we reimagine the future of a mall, there will be customized considerations and realities. However, there is a process to each diagnostic that every project should include. Here’s how to get started:

Reimagine a mall as a public/private partnership. Either partner can launch the process, but success requires that they work together—and this can extend to jointly investing in transformative public realm and infrastructure. And success creates significant value for all partners. 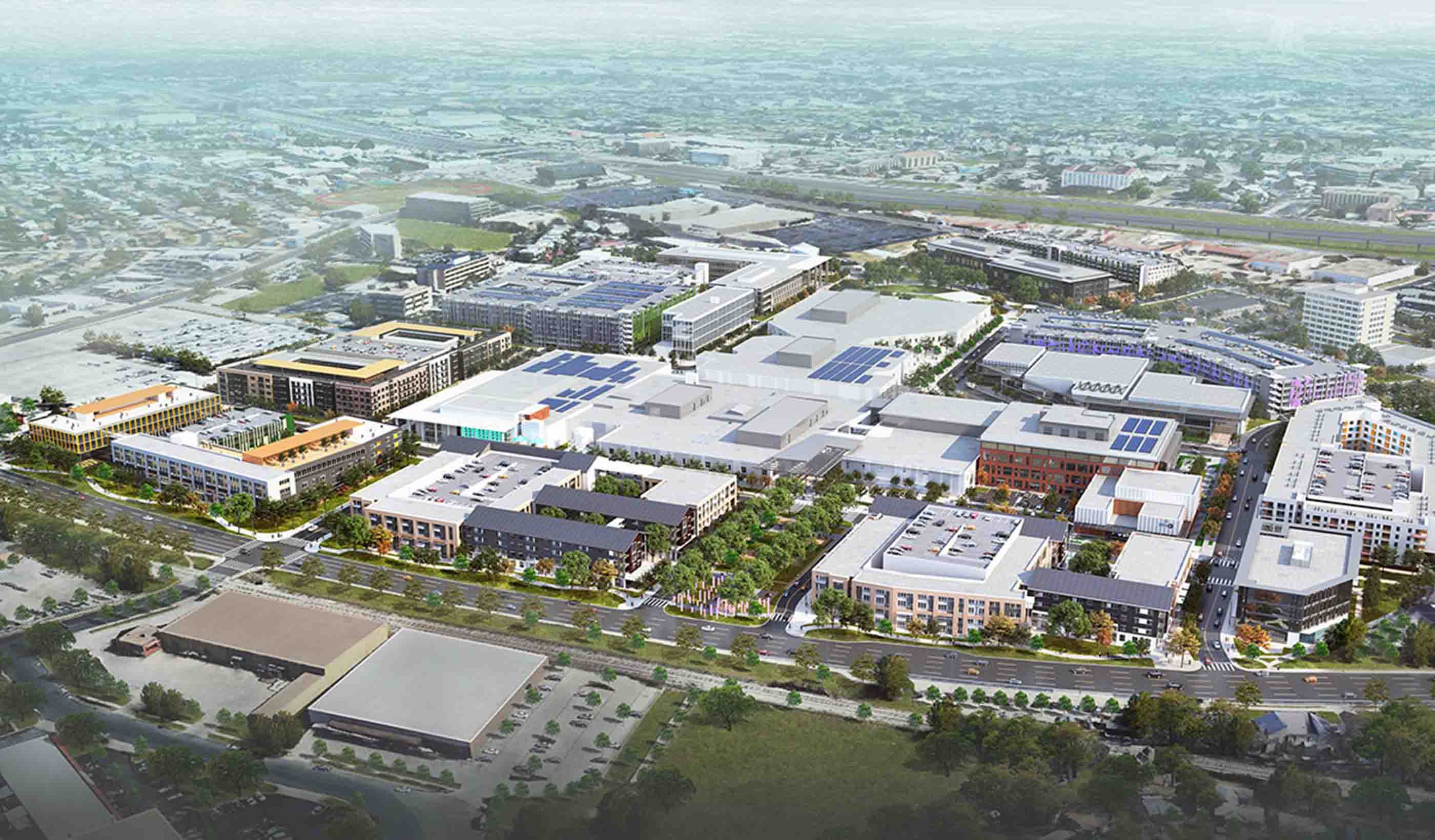 Identify options. Can this be a new mixed-use neighborhood? A research or high-tech employment center? A new university campus—and neighborhood?

Analyze the costs and benefits of each option. All partners will need to come out ahead in this equation because reimagining a mall almost always requires significant investment by all partners.

Align public policy, community goals, and market realities. The community should be involved in creating a vision for the site. Based on that vision, goals and market analysis can help inform the best policies and regulations to guide future redevelopment.

Malls thrived in an era in which highways, expanding suburbs, and decentralization spelled success. Times have changed and opportunity is now about building up, not out. In this new era, former malls represent ground zero for new opportunities that build our communities today. We are getting started on an exciting trip, where the destination is well worth the effort.

5 steps to remake suburbs into green communities where people want to live, work, and play

How gaming technology is changing the way we design for acoustics

Thinking holistically about a technology-enabled customer experience will make transit a mode of choice for more people.