It might have been a surprise to some viewers of “60 Minutes” on December 4, 2016 to hear Anderson Cooper’s report. “Thousands of lawsuits have been filed in the U.S. for violations of the Americans with Disabilities Act (ADA), but many business owners say they're nothing more than a shakedown,” he said. “You might think you have to be a customer of a business to file a lawsuit against it, but in some states you don’t. You can simply drive by a store or restaurant, and if you see a sign in the wrong spot, or a ramp that’s off by a few inches, you can sue.”

To many business owners, though, the story was all too familiar. Across numerous states, unscrupulous attorneys are filing hundreds of these “drive-by” lawsuits that are founded on noncompliance with ADA regulations against businesses that often have no idea they have done anything wrong. In 2014, more than 4,430 cases reached federal courts. In Phoenix alone, more than 1,700 businesses were sued in 2015 by an organization named “Advocates for Individuals with Disabilities.”

Because the ADA statutes apply only to public accommodations, most of the cases filed are against commercial businesses. Whether you own or operate a coffee shop, beauty parlor, a retail business, movie theater, or other commercial properties, you are at risk.

In addition to bearing the cost of rectifying the violations, targeted businesses are also responsible for their own defense costs, including attorneys’ and experts’ fees—and for the plaintiff’s fees and costs, as well. Often, these litigation costs are far greater than what it would cost to bring the property up to code.

Here’s a real-life example of how the scheme works. On a single day in 2011, a plaintiff and his lawyers filed eight identical ADA lawsuits against small businesses located within a two-block radius of one another. Later, the complaint was amended to include another defendant who ignored the lawsuit, resulting in a default being taken. After the court issued a cursory $14.31 default judgment, the plaintiff’s counsel filed a motion for fees and litigation costs in the amount of $15,172.

Why are these lawsuits so prevalent? Without casting aspersions on human nature, the reason is simple: Because they are easy. Parking lot violations are low-hanging fruit for these drive-by litigants, who cruise through parking lots of commercial businesses, looking for infringements of ADA regulations. Non-compliant conditions are readily apparent to the opportunistic eye.

While several states—including Arizona and California—have enacted legislation that curbs the serial lawsuits, some litigants have simply begun filing their claims in federal court instead of at the state level, so businesses within the state are still impacted. In response, U.S. senator Jeff Flake of Arizona has introduced the ADA Education and Reform Act at the federal level. The bill would restore the spirit of the ADA by requiring businesses to be notified of a violation and granted 120 days in which to correct it. If the violation is not resolved in this time frame, only then can suits be brought against the offending business.

While these legislative measures will help combat these nuisance complaints, it’s vital that businesses know where they stand. Many business owners and property managers are under the mistaken belief that because their building was built before the 2010 revisions to the Americans with Disabilities Act took effect, they are grandfathered from compliance. This is not correct.

“When a business or State or local government restripes parking spaces in a parking lot or parking structure (parking facilities), it must provide accessible parking spaces as required by the 2010 ADA Standards for Accessible Design (2010 Standards). In addition, businesses or privately owned facilities that provide goods or services to the public have a continuing ADA obligation to remove barriers to access in existing parking facilities when it is readily achievable to do so. Because restriping is relatively inexpensive, it is readily achievable in most cases. State and local government facilities also have an ongoing ADA obligation to make their programs accessible, which can require providing accessible parking.” (emphasis added) —Americans with Disabilities Act, ADA Compliance Brief: Restriping Parking Spaces, U.S. Department of Justice, Civil Rights Division, Disability Rights Section, December 2015 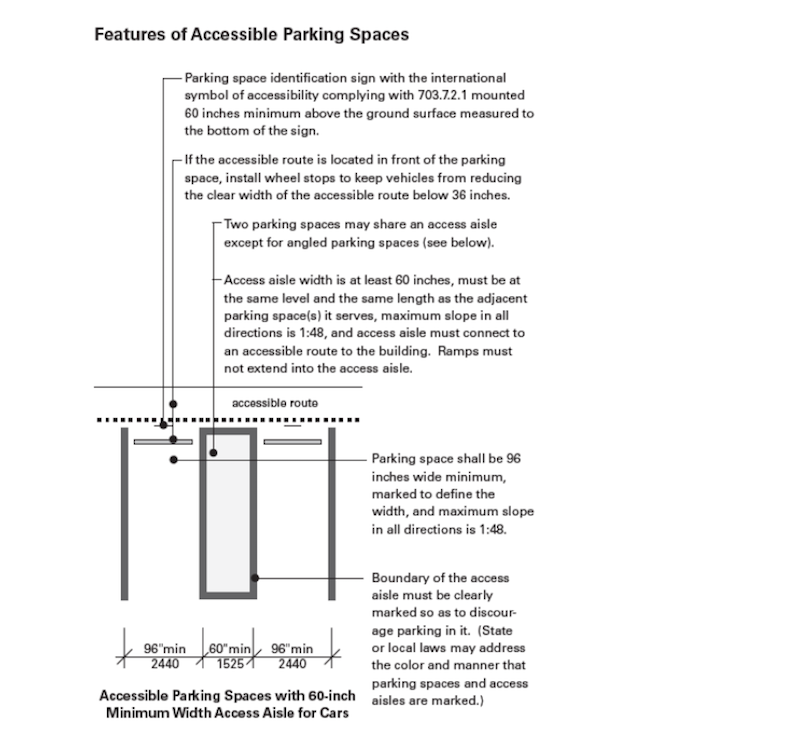 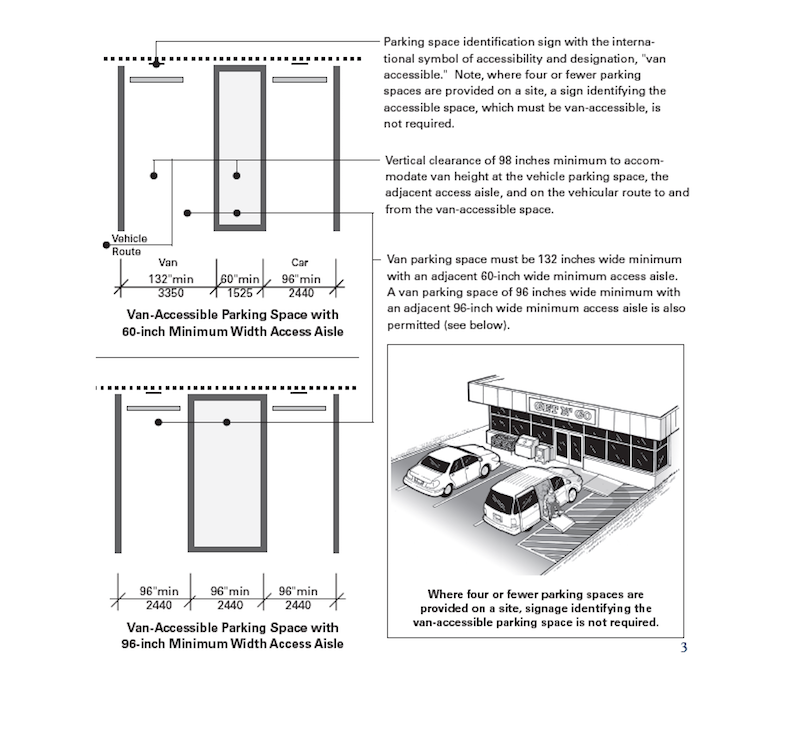 According to these guidelines, there are several observable violations evident in this parking lot, making it an easy target for a drive-by suit. These include:

The best way to avoid becoming the target of drive-by suits is to proactively investigate, identify, and remediate all noncompliance issues so as to avoid the possibility of suit altogether. Hiring an ADA accessibility consultant and architect to identify and correct violations before they trigger a lawsuit is far less costly and less time consuming than litigating a trumped-up case—which would ultimately require correcting any infringements, anyway. In these situations, an ounce of prevention is truly worth a pound of cure.

Global supply chain interruptions that started at the very beginning of the pandemic are still with us and compounding every step of the way. Below are a few proven tips on how to avert some of the costly fallout should we be faced with similar commercial disasters at any time in the future.

Design goooals for football stadiums: Lessons from the U.K. and the U.S.

To wait until there’s a problem affecting design and construction before consulting with a PM wastes valuable time when a project is at its most vulnerable point.

In the course of providing cost estimating services, educating the client on making prudent choices is a high priority.

There is no single method of calculating progress payments, but the most common formula is the percentage of completion applied to the total contract price, less a retainage which is held by the owner until final acceptance of the project.

Prescription for success: Managing technology in the design of healthcare facilities

While the benefits of intelligently deployed technology are abundantly clear to both designers and healthcare end-users, it’s no simple task to manage the integration of technology into a building program.

Home maintenance 101: How uninformed homeowners can cause developers big headaches, and what to do about it

By taking a proactive stance, the home-building industry can both educate the public about the importance of home maintenance and raise awareness within the construction community about protecting their professional rights and reputations.

Building bonds: The role of 'trusted advisor' is earned not acquired

A trusted advisor acts as a guiding partner over the full course of a professional relationship.

To wait until there’s a problem affecting design and construction before consulting with a PM wastes valuable time when a project is at its most vulnerable point.

In the course of providing cost estimating services, educating the client on making prudent choices is a high priority.

There is no single method of calculating progress payments, but the most common formula is the percentage of completion applied to the total contract price, less a retainage which is held by the owner until final acceptance of the project.