BIM for O+M: Less about the model, more about the data

Like the weather, everyone in the AEC industry is talking about using BIM models for operations and maintenance, but no one—well, almost no one—is doing anything about it.

That’s because there’s a fundamental difference between how architects, engineers, and contractors think about BIM modeling and how facilities directors view it.

Architects love BIM for its “parametric” capability, which allows them to play around with a structure under design in three (or more) dimensions, in real time.

MEP engineers also love BIM for its design capabilities, especially in detecting clashes between all the convoluted tangles of pipes and wires that they create.

Contractors love BIM because they can plug the model into project management software and use it to have thousands of individual building elements (like trusses and girders), all individually designed by the structural engineers and tagged with RFID or QR labels, delivered to the job site just in time for their crews to set them in place like so many giant LEGOs.

That’s all well and good for the AEC side of things. But what do facilities people think of BIM?

Frankly, most of them could care less, at least about the model itself. Facilities directors have no interest in becoming BIM experts. What they want is a simple, easy-to-use way to get at the data that’s captured in the BIM model to run their buildings more effectively.

Which brings us to recent BIM-related developments at the renowned Corcoran Gallery of Art, in Washington, D.C.

The Corcoran, founded in 1869 by William Wilson Corcoran, opened its doors in 1874. Four years later, the Corcoran School of Art was established. The original building, at 1661 Pennsylvania Avenue, NW, was designed by James Renwick (it is now the Smithsonian’s Renwick Gallery). In 1897, the gallery and school settled in a new Beaux Arts structure designed by Ernest Flagg, at 500 17th Street, NW.

As the oldest private art museum in Washington, the Corcoran held a place of honor in the city’s arts scene for more than a century. In the late 1980s, however, things started to unravel. In 1989, management was forced to cancel a Robert Mapplethorpe retrospective when it was learned that the exhibit, which had funding from the National Endowment for the Arts, would show homoerotic photographs.

In 2005, the Corcoran had to cancel plans for an addition by Frank Gehry when it couldn’t raise the $200 million for the project. Five years later, the museum ended its year $4 million in debt. By 2011, gallery attendance plummeted to a seven-year low (85,000), and the Corcoran was $7.2 million in debt.

Three years ago, financial woes finally forced management’s hand. In May 2014, the George Washington University and the National Gallery of Art agreed to take over the Corcoran. GWU would run the art school (now the Corcoran School of the Arts & Design); the National Gallery would get the bulk of the art collection and access to 15,000 sf of gallery space. GWU raised more than $45 million to undertake the first phase of a three-year reconstruction of the Flagg Building. In 2015, architecture firm Leo A Daly was brought in to lead the work.

Years of deferred maintenance had taken its toll on the Flagg Building, a D.C. historic landmark that is also listed on the National Register of Historic Places. Last spring and summer, the Building Team—Leo A Daly, Mueller Associates (MEP), Silman (SE), GHD Fire Protection (LS), and Whiting-Turner (CM)—rehabbed much of the fire alarm and sprinkler systems, mechanical equipment, electrical systems, lighting, and IT infrastructure. Long-delayed ADA improvements were finally made.

Due to the historic stature of the building, the Building Team could not penetrate the walls or floors. Historic drawings were tied up in legal limbo and could not be accessed. So the team used virtual technology to explore the building’s bones, lungs, and arteries without performing invasive surgery.

They developed a “Data Eco System” based on five data-collection methods:
• Laser surveying and point cloud model assembly for building the Revit model
• Hygrothermal wall analysis (HGA) to define the U-values of the exterior walls for further evaluation
• Computational fluid dynamics (CFD) modeling, for use in designing mechanical systems
• CCT camera surveying within the building’s pipe systems
• Ground penetration radar (GPR) scanning for the Corcoran’s floors, which had been constructed using the “Metropolitan” system that was popular in the East in the late 19th century. This system used gypsum, wood chips, and piano wire instead of rebar and concrete. GPR enabled the team to locate the main structural members so that they’d know where to safely place any additional supports. 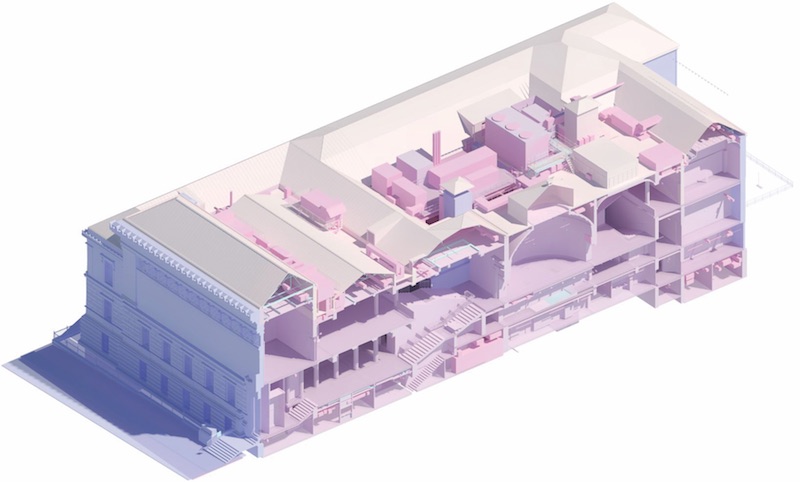 Revit model of the Corcoran Gallery reconstruction project by Leo A Daly.

PUTTING IT ALL IN WRITING

All these efforts were conducted to comply with GWU’s Facilities Information Management Procedures Manual, an 86-page document that governs all construction on the 43-acre Foggy Bottom campus. GWU’s Planning, Development & Construction Department completed the FIM manual in 2014.

A key component is the “BIM Project Execution Plan,” which defines the roles and responsibilities of the project team and proffers detailed guidelines on BIM goals, project deliverables, electronic communications, collaboration procedures (such as BIM coordination meetings), and content requirements of the BIM model.

Andrew Graham, AIA, NCARB, Associate Architect in the D.C. office of Leo A Daly, has been impressed with GWU’s BIM process. “They’re clearly stating up front everything they expect to have for future operations and maintenance,” he says. “Their O&M staff have a system in place to get the data they need. It’s very organized.”

Graham says GWU’s thinking about BIM was eye opening. “We architects tend to think of BIM as ‘the model,’ but on the facility management side, it’s more about the database,” he says. In fact, only one GWU facilities staffer had a Revit license.

"Too many architects look at the BIM model. They should be looking at how to run the building and the equipment" - Doug Williams, Leo A Daly

Doug Williams, Director of Digital Practice at Leo A Daly, says GWU’s BIM execution plan concentrates on collecting data on the building’s equipment—up to 16 data points for each piece of equipment: model number, lifespan, warranty information, installer, etc. Much of the data from the surveys went into the Revit model, but some is being collected separately to meet the FIM requirements.

At turnover, sometime late this year, Leo A Daly and Whiting-Turner will be responsible for making sure the as-built information and additional materials like O&M manuals for the equipment are incorporated into the final Revit model. (Whiting-Turner is collecting some of the FIM-required data in Excel, which is fine with the university, as long as they get the data.) Then GWU will put all the data into an AssetWorks format (www.assetworks.com) for future reference.

Williams, who joined Leo A Daly last July from Perkins+Will, says there aren’t a lot of institutional owners who have as sophisticated a BIM execution plan as GWU’s. He credits Penn State University as an early proponent. The University of Texas Southwestern Medical Center, with whom he worked while at P+W, was “very intense” about tracking medical equipment. “It had to be bar coded for CMMS purposes,” say Williams. (CMMS refers to “computerized maintenance management systems.”) Williams says UTSW also wanted extensive modeling of the MEP system to identify components like valve cutoffs and service zones.

Another higher education institution, Brigham Young University, asks for a detailed inventory of the square footage of all materials for life cycle budgeting. “They know the carpeting has a seven-year replacement cycle, so they can run schedules and reports for O+M budgeting,” he says, to include not only the cost of purchasing and installing new carpet every seven years or so, but also the cost of cleaning materials and maintenance staff time.

Williams says facilities staffs should be involved in the BIM modeling at the front end of major projects. “They have to run the building for the next 30 to 50 years,” he says. “They have to ask: What’s important to me as a client?” Graham seconds his colleague on that point. “You can’t get the facilities people involved halfway through the project,” he says, “you have to get them involved at the beginning.”

Leo A Daly has completed CDs for the next phase of the project. “It’s a bigger package,” with major mechanical systems that will bring the total job up to $50 million, says Graham.

Construction will start this spring. When the project is completed later this year, the team will turn in all the documentation required under the FIM manual—but not the BIM model itself—to the George Washington University.