Big-box store rescaled to serve as a preventive-care clinic

A major trend in the healthcare sector is for hospitals to bring their outpatient services closer to the communities and patients they serve.

Seattle Children’s Hospital, one of the nation’s leading pediatric hospitals, has embraced the idea of opening preventive-care clinics throughout the greater Puget Sound area. In 2013, the opportunity arose to adapt a 37,000-sf former Circuit City in Federal Way, Wash., 45 miles south of the hospital’s Bellevue home base.

The hospital was attracted to the big box’s footprint: one level with wide spans between structural columns, which would facilitate a floor plan with open, flexible workspaces and modules that could incorporate labs, X-ray, ultrasound, pharmacy, and rehab therapy functions. Another bonus: the cost of adapting the big box and assuming a 20-year lease would be less expensive than leasing a medical office building in the same market.

This project could also serve as a prototype for clinics the hospital might open in other South Puget Sound markets.

“Seattle Children’s hospital is a beautiful example of adaptive reuse,” says Edoarda Corradi Dell’Acqua, Adjunct Professor at the Illinois Institute of Technology and a Reconstruction Awards Judge. “The project took advantage of the architectural and structural characteristics of the existing retail building; its location in a strip mall provides access, parking, and visibility. Furthermore, the tall ceilings and wide spaces allowed for flexible design and layout.”

The Circuit City building wasn’t exactly ideal for conversion to a healthcare facility. The hospital and its Building Team needed to come up with innovative solutions to adapt and upgrade this building, all within a 14-month construction schedule.

The client and design team, along with consultants, the contractor, manufacturers, and the city of Federal Way, engaged in 13 integrated design events to determine the best course of action to minimize waste and improve efficiency and patient outcomes. The design events advanced wider decisions, too, about the planning and program, which includes three standardized clinical modules consisting of 10 exam rooms and a team room per work area.

The most nettlesome problem was the existing building’s inability to support the mechanical and electrical improvements needed for the clinic. The solution: build an interior frame within the building so that the HVAC and electrical equipment could be installed on top of the framing. The framing also lowered the ceiling height to a more patient-friendly 10 feet, from 25 feet. 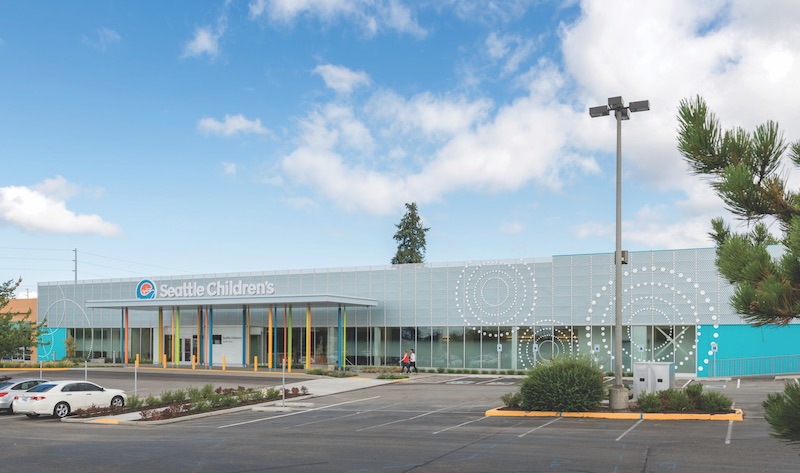 A section was left at 16 feet high for an indoor basketball court used for pediatric orthopedic therapy and sports medicine.

The internal framing required that the building envelope be brought up to code for a healthcare facility. A seismic retrofit was conducted, with structural improvements made to existing columns.

Environmental abatement wasn’t necessary. But the hospital still decided to create a system that allows for continuous monitoring of air quality. A series of pipes was installed within a bed of gravel beneath the floor slab. The pipes run through a cavity between the ceiling and the roof, and the testing mechanism monitors the air coming from the pipes.

The client and Building Team built in more time to explore and consider design and construction options. The team also had the time to confer with the city about permits, planning, and Federal Way’s economic development goals.

Planning meetings among designers, vendors, and the contractor resolved issues for the execution of the building’s design. These meetings were particularly useful in expediting the design of the building skin.

“We brought everyone in early and allowed the sub to be an active participant to finalize the design aspects,” recalls John Schuh, Vice President with Aldrich & Associate, the project’s general contractor.

Streamlining processes and collaboration helped shave $400,000 off the overall project’s cost. Since this facility opened, the clinic has reported two major practice flow improvements: the elimination of duplicate medical records collection, and better communication of return patient visits between physicians and the reception staff. 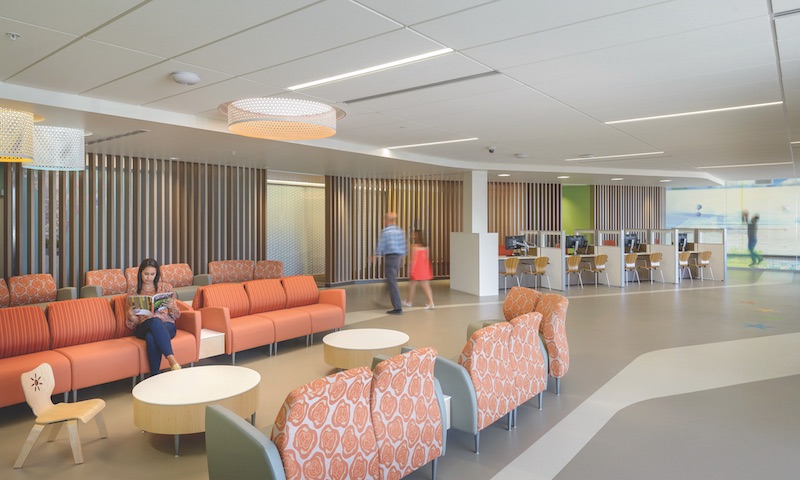 An internal building frame provided a structural backbone from which mechanical and electrical systems could be suspended. The framing supports the column-free spans that lowered the 25-foot ceiling height to 10 feet for a more appropriate visitor and patient experience. Courtesy of Aaron Leitz.