The construction unemployment rate was 16.6% in April, up 11.9 percentage points from the same time last year. The construction industry lost 975,000 jobs on net in April, according to an Associated Builders and Contractors analysis of data released today by the U.S. Bureau of Labor Statistics. This was the largest recorded decrease in construction jobs since the government began tracking employment in 1939, despite construction remaining an essential industry in much of the nation through April.

The construction unemployment rate was 16.6% in April, up 11.9 percentage points from the same time last year. Unemployment across all industries rose from 4.4% in March to 14.7% last month. This was the highest rate since the BLS started tracking unemployment in 1948. Because of technical reasons related to the BLS survey and a classification error in several responses, the unemployment rate is probably closer to 20%.

“The hope had been that construction activity would hold up well given the industry’s classification as an essential industry in much of the nation and the presence of substantial backlog coming into the crisis, which stood at 8.2 months in February, according to ABC’s Construction Backlog Indicator,” said ABC Chief Economist Anirban Basu. “But alas, in large measure, those hopes were not realized. The level of construction industry job loss in April easily surpassed that of the worst month sustained during the Great Recession, when 155,000 jobs were lost in March 2009. Between April 2006 and January 2011, construction industry employment declined by 2.3 million. The construction industry lost nearly a million jobs last month alone.

“Based on a combination of business confidence indicators, initial unemployment claims and other emerging data, May will represent another month of crushing construction employment loss,” said Basu. “Project postponements and cancellations are now commonplace, with construction backlog failing to be the protective shield that it normally is during the early stages of economywide recession.” 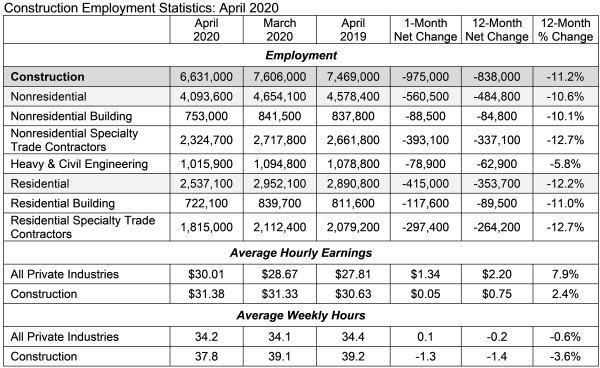 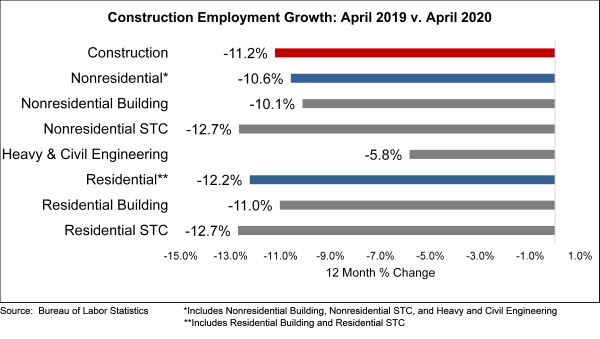