Gensler, in latest report, highlights where resilient design could make the greatest impact on the built environment

The firm showcases its own recent projects as demonstrations for what can work in six areas. Upcycle, an 81,000-sf office building in Austin, Texas, reused 95% of what had been a recycling warehouse. Adaptation is one of six areas where Gensler's new report on the impact of design on the built environment focuses its recommendations. Image: Gensler

By the mid 21st century, over three quarters of the world’s population could be living in urban areas. Relentless urbanization must reckon with the reality of climate change, which compels AEC firms and their clients to rethink the built environment with an eye toward resilience and preservation.

“The greatest potential impact comes from design itself,” states Gensler in its third annual “Impact by Design” report. Gensler asserts that while the business case for sustainable design “has never been clearer,” the specifics for achieving higher levels of sustainability “are changing.”

The report revolves around six topics—form, materials, adaptation, energy, water, and intelligence—where Gensler believes design can have the greatest positive impact in the coming years. “Our goals are to expand the discussion of resilience beyond just energy efficiency, and [to] demystify complex conceptualizations to encourage broader adoption of resilient methods.”

Gensler stakes its claim for authority in these matters by noting that its estimated 1.25 million sf of project work in 2017 were designed to keep nearly 11 million metric tons of C02 from entering the atmosphere on an annual basis.

Gensler’s design proposal for the 1.2 million sf Zhuhai Huace Plaza, in Guangdong, China, merges two towers into a single structure that focuses on sustainable performance, community connectivity, and the integration of nature. A vertical atrium system embeds vegetation at all levels of the building, while creating a breathing envelope that brings draft winds into the building. Performance is further optimized via intelligent building controls.

The firm’s design for the 430,000-sf Harbin Bank headquarters in Beijing includes a double-glazed high-performance façade to reduce the building’s cooling load by over 50% in the summer and minimize heating loads by up to 40% in the winter. That system is coupled with automatic blinds to facilitate occupant access to daylight whenever possible, while providing sufficient solar shading and mitigating glare. The building requires 11% less mechanical equipment. 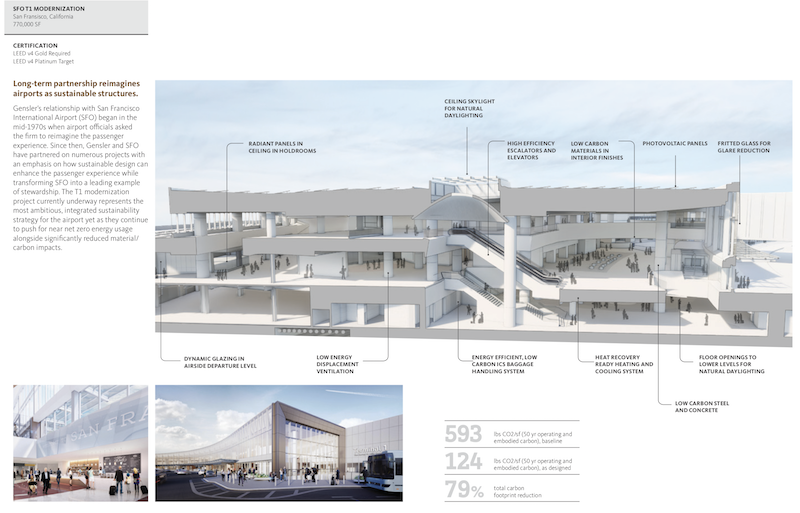 The choice of materials is a major component in the modernization of San Francisco International airport's Terminal 1, which when completed is expected to reduce its carbon emissions by 79%, compared to its previous baseline, over 50 years. Image: Gensler

MATERIALS: Sustainability usually starts with materials selection. “We must prioritize lifecycle thinking for every design we create and every material, furniture, and fixture we specify,” Gensler states, adding that “minimizing embodied carbon has become a point of emphasis within our portfolio.”

A prime example can be found in Gensler’s design for the ongoing modernization of San Francisco International Airport’s 86,000-sf Terminal 1, which Gensler claims “represents the most ambitious, integrated sustainability strategy for the airport yet, as they continue to push for near net zero energy usage alongside significantly reduced material/carbon impacts.”

The modernization, upon completion, is expected to earn LEED Gold certification.

ADAPTATION: Gensler’s report laments that, globally, there’s still too many poorly performing buildings, and the current retrofit rate is sluggish: in the U.S., only 2.2 billion sf, or 2% of total floor space, gets refurbished each year. So there’s plenty of opportunity to renovate buildings in ways the produce environmental, economic, and social benefits.

Gensler acknowledges the barriers to energy refurbishment of buildings: renovation cost, access to finance, rapid ROI, low energy prices, lack of technical solutions, lack of skilled labor, supply-chain fragmentation, and lack of awareness. But its report insists that the AEC industry must develop strategies to improve an existing building’s performance without needing to tear it down.

Take, for example, the adaptive reuse of the former Balcones Resources recycling warehouse in East Austin, Texas, for UpCycle, an 81,000-sf institutional-quality office building. Gensler’s design reuses 95 percent of the existing warehouse’s structure, even the building skin, which is turned inside out to reveal its natural finish. Even old elements such as exhaust fans were reused as decorative design features. 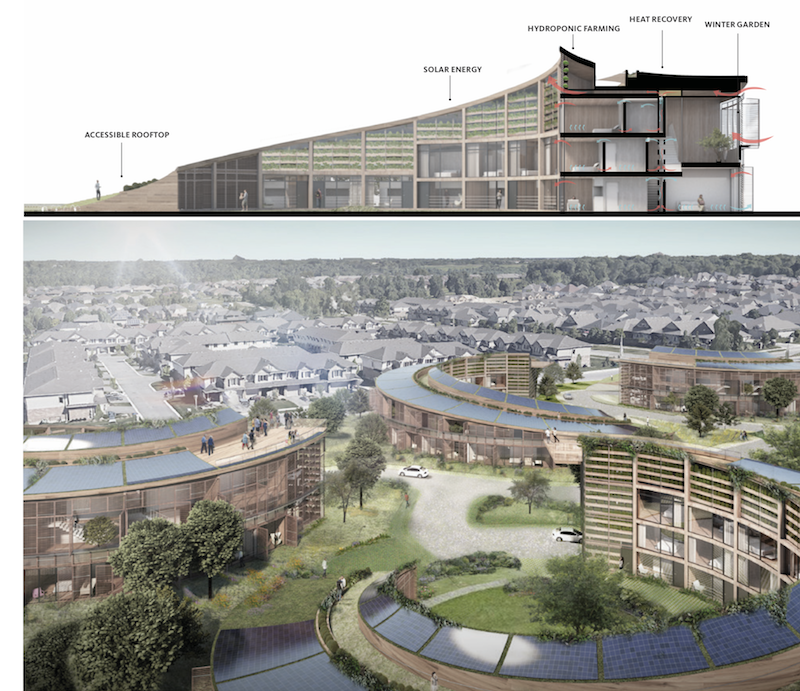 Gensler's master plan and concept design for a net-zero energy 52-townhouse neighborhood incorporates an autonomous vehicle network on the premises with solar panels and a rooftop hydroponic farm. Image: Gensler

ENERGY: The ultimate goal for new construction and renovation is to reduce the energy impact of buildings to zero, either by reducing consumption, creating new energy, or buying energy.

The report points specifically to the 8,000-sf Sustainability Center at the University of California-Northridge, the first ZNE building in the state’s university system. It includes a 25-kW rooftop PV array coupled with a glazed overhead window, which eliminates the need for artificial light. All of the building’s hot water needs are met by solar thermal and hybrid hot water heat pumps. The installation of vacuum composting toilets reduces annual water use by 43,500 gallons. The building’s cladding is a cementitious panel system that’s repurposed from cement panels. Grey water is used for irrigation.

Gensler has also come up with a design concept for an Electric Vehicle Enclave that would be part of a new suburban housing model that supports community building through common courtyards, and assumes the ubiquity of automated vehicles in the future. This concept includes a year-round hydroponic farm.

WATER: The report includes a map that shows the cities and regions globally that are most vulnerable to coastal flooding. Possible solutions to mitigate that risk include canals that channel water away from the built environment to flood-proofed sites, and coastal dunes and dedicated wetlands that inhibit flooding and appropriately store both flood and fresh water. “The design of individual buildings must then be considered.”

Lower-lying areas would be zoned as parks and wetlands, effectively acting as buffer zones that protect the surrounding areas from water fluctuations. A man-made delta capable of integrating higher water levels into the urban fabric without threatening residents or businesses—including the transformation of streets into canals—would result in a transportation network that can serve the needs of a denser city while reducing individual vehicle usage.

This solution foresees the broader application of sensor and network technologies. The next iteration of smart buildings will leverage advances in sensor technology alongside an increased number of IoT-enabled devices. The optimization of operations would include efficiency, responsiveness, and anticipation. Intelligent design would allow building occupants to have a more direct relationship to their building.

Johnson Controls’ 376,000-sf Asia-Pacific headquarters in Shanghai, which has earned both LEED Platinum and EDGE certifications, operates with assistance from myriad advanced technologies, including a Metasys Building Automation System, a Central Plant, and LED lighting with daylight dimming, occupancy sensors, and interior façade roller shade system. The building is also equipped with 21,528 sf of solar panels.

The headquarters, which opened in June 2017, is expected to generate 44% savings in overall energy consumption compared to the local market standard, reduce water usage by 42% via its grey water recycling and rooftop storm water recapture facilities, and reduce embodied energy in materials by 21% through the use of Forest Stewardship Council-certified wood-based building materials and the sourcing of locally supplied products.