As America celebrated National Bourbon Day on June 14, downtown Louisville also celebrated the highly anticipated grand opening of the Old Forester Distillery.   This event is also touted as a triumphant return of America’s first bottled bourbon in continuous production by the same family before, during and after the Prohibition to the Whiskey Row.  Known as the historic epicenter of bourbon making, Whiskey Row once had 89 bourbon related-business occupying about two blocks of Main Street.  Today, Old Forester’s new $45 million, 70,000-square-foot distillery is in the same building that it occupied over a century ago - with a few upgrades, of course.

The unique task of designing an immersive visitor center with a fully operational distillery, cooperage and bottling line was given to Bravura Architects in Louisville, KY.  To achieve this, the designers used glazing throughout the building to provide views of the operation.  In areas where fire ratings are required, they specified fire resistive glass and framing that met ASTM E-119/UL 263 to provide as much clear views as possible.

One of the areas where fire resistive glazing was specified was in the three floors that open into the Barrel Conveyor.  This decision was made to give visitors an opportunity to view this unique piece of equipment.  “The goal was to provide guests with a visual connection to better understand the product and process flow within this working distillery, while still meeting the ratings for this 3-story shaft,” says Ed Kruger, the project architect at Bravura Architects. To achieve this, SAFTI FIRST supplied a transparent fire resistive wall using ASTM E-119/UL 263 rated SuperLite II-XL 60 in GPX Architectural Series Framing on the second floor of the Barrel Conveyor so visitors can see where the barrels are filled and brought down the main floor. 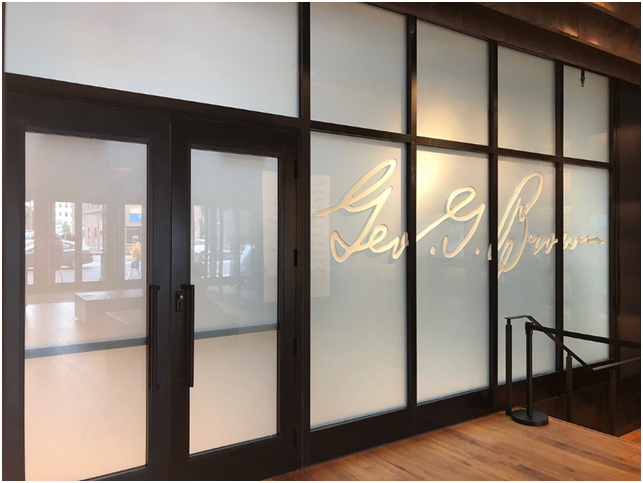 Fire resistive glazing was also used to create drama and suspense between the Welcome Area and the sky-lit atrium, which houses the ‘heart’ of the distillery.    “The client wanted to bring diffuse light from the atrium into the Welcome Area, and had wanted this signature wall to be a dramatic, lit element within the space that would celebrate the brand's founder. Because retail is on the other side of this glass wall (which is the end of the tour), we didn’t want tour guests to see the final dramatic reveal of the still and the 4-story atrium until the very end,” says Ed.  “Thus, the translucent film obscures the view, allows light to flood that area of Welcome, and provides a background to the focal signature element.”  To achieve this, ASTM E-119/UL 263 rated Superlite II-XL 60 with a decorative film in GPX Architectural Series Wall framing and GPX Builders Series Temperature Rise Doors were supplied for the 1-hour wall separation. 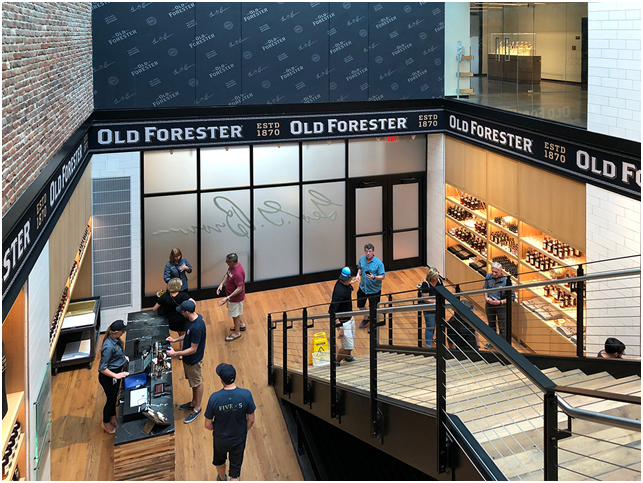 There were also some 60 and 90 minute temperature rise doors in building, and the designers wanted to keep the open and transparent design while meeting fire code requirements. “Along the tour path, the goal was to have full-lite glass doors to create a fluid transition between spaces as much as possible.  However, fire-rating requirements meant that these openings then had to have the special fire-rated glazing, doors and frames,” says Ed.  To maximize the vision area of these temperature rise doors, SAFTI FIRST supplied ASTM E-119/UL 263 rated SuperLite II-XL 60 and 90 instead of ceramics or other fire protective glazing that is limited by code to 100 square inches.  The SuperLite II-XL glazing was combined with 60 and 90 minuteGPX Builders Series Temperature Rise Doors to meet the code requirements. 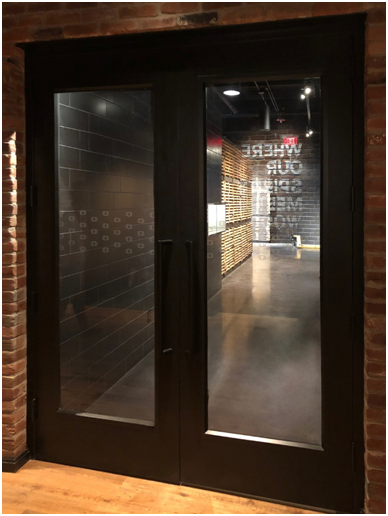 A main contributor in this project’s success was the support that the designers received during the early stages, particularly from Adam Olson, SAFTI FIRST’s architectural representative in Kentucky.  “Adam was very helpful at working through the multitude of special conditions that exist on this project,” says Ed.“From the 90-degree corners, to high bases on the system, to unique locking challenges, Adam assisted us in working out the best solutions.”

The result is a beautiful and engaging space that tells Old Forester Distillery’s storied past as it looks to the present and the future in Louisville’s revitalized Whiskey Row.