Associated Builders and Contractors reported today that its Construction Backlog Indicator rebounded modestly to 7.3 months in December, an increase of 0.1 months from November’s reading, according to an ABC member survey conducted from Dec. 18 to Jan. 5. Backlog is 1.5 months lower than in December 2019. 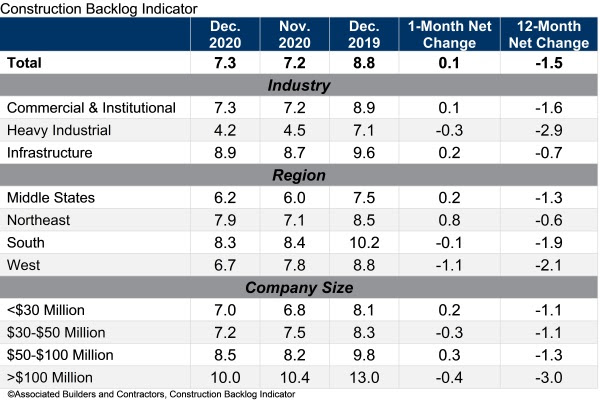 ABC’s Construction Confidence Index readings for sales, profit margins, and staffing levels increased in December. The sales index climbed above the threshold of 50, indicating contractors expect to grow sales over the next six months. The index reading for profit margins remained below that threshold. The staffing level index increased to 56.3 but remains well below its December 2019 reading. 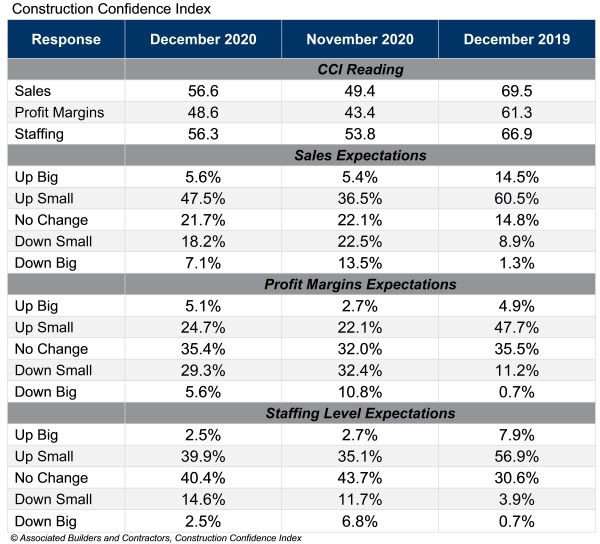 “While many contractors enter 2021 with significant trepidation, the most recent backlog and confidence readings suggest that the onset of vaccinations has generally led to more upbeat assessments regarding nonresidential construction’s future,” said ABC Chief Economist Anirban Basu. “Backlog is down substantially from its year-ago level and profit margins remain under pressure, yet many contractors expect to enjoy higher sales and to support more staff six months from now.

“The baseline expectation is that by the spring, the U.S. economy will blossom,” said Basu. “With many households sitting on mounds of savings and sustaining pent-up demand for many goods and services, the U.S. economy is set for rapid growth as it reopens more fully during mid to late 2021. While it will take time for that to fully translate into new construction projects, some that were postponed earlier during the pandemic are likely to come back to life over the next several months. That should help many contractors begin to rebuild backlog, and to eagerly await 2022.” 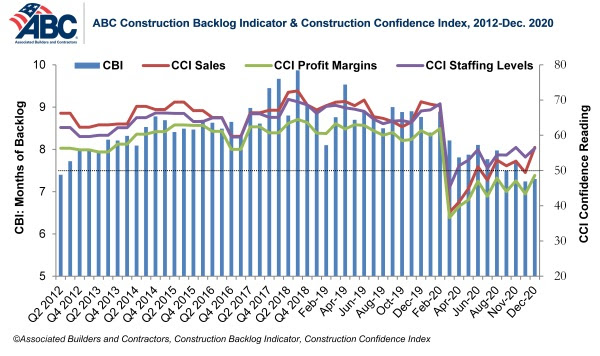 Note: The reference months for the Construction Backlog Indicator and Construction Confidence Index data series were revised on May 12 to better reflect the survey period. CBI quantifies the previous month’s work under contract based on the latest financials available, while CCI measures contractors’ outlook for the next six months.