Expectations for sales during the coming six-month period remained especially upbeat in January.

Expectations for sales during the coming six-month period remained especially upbeat in January, with nearly 70% of respondents anticipating an increase in sales levels. A similar level of confidence characterizes contractors expectations on future staffing levels, with fewer than 7% of contractors indicating expectations of shrinking workforces.

While contractors became fractionally less confident regarding profit margins, more than half of respondents still expect their margins to increase in coming months, while less than 13% expect margins to shrink. All three principal components measured by the survey—sales, profit margins, and staffing levels—remain well above the diffusion index threshold of 50, signaling ongoing expansion in construction activity.

“Indications of ongoing confidence in the construction sector have become more important," said ABC Chief Economist Anirban Basu. “Recent dips in consumer and small-business confidence have become a source of concern, as have weak reports regarding employment growth and retail sales. Thankfully, contractors continue to exhibit elevated levels of confidence regarding the near-term trajectory of the economy despite ongoing workforce shortages. Not only do contractors expect to further expand staffing levels, many continue to expect rising profit margins despite rapidly expanding payroll expenses.

“One source of relief has been a recent moderation in construction materials prices,” said Basu. “With the global economy continuing to soften, materials prices should remain well-behaved over the months to come. Investors continue to aggressively seek ways to deploy capital, including on new commercial construction. This helps explain a recent surge in the Architecture Billings Index, another leading indicator that, along with CCI, suggests ongoing economic momentum throughout the first half of 2019.”

CCI is a diffusion index. Readings above 50 indicate growth, while readings below 50 are unfavorable. 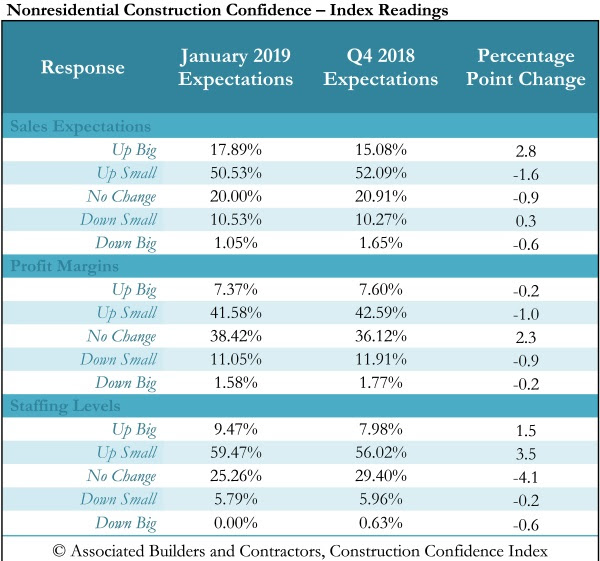