Associated Builders and Contractors recently reported that its Construction Backlog Indicator expanded to 8.8 months in February 2019, up 0.7 months (8.2%) from January 2019, when the backlog dipped to 8.1 months.

“As predicted, the decreased backlog in the first month of the year reversed in February,” said Anirban Basu, ABC’s chief economist. “Low January readings are typically due to seasonal factors like the holidays and weather, but this year they were further affected by the federal government shutdown. In particular, the backlog in the infrastructure category increased significantly from January to February, which is consistent with the notion that the shutdown delayed a meaningful amount of contract signing.

“The heavy industrial segment was the only category in which backlog declined in February,” said Basu. “In the context of a weakening global economy and a strong dollar, which suppresses U.S. export growth, it is not altogether surprising that construction backlog declined in this category. This also helps explain slightly diminished backlog in the Middle States, which tend to rely more on industrial production. Backlog also bounced back in the commercial/institutional category, an indication of confidence among private developers on both coasts.”

“In general, nonresidential construction activity lags the overall economy by 12 to 18 months,” said Basu. “Last year was good for the economy, with the implication that contractors should expect to remain busy in 2019." 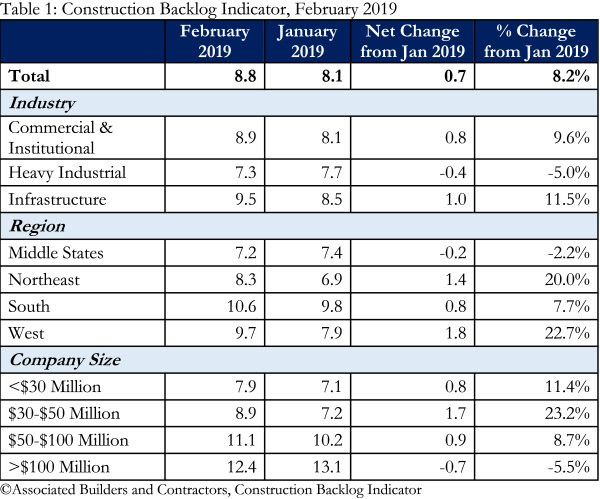 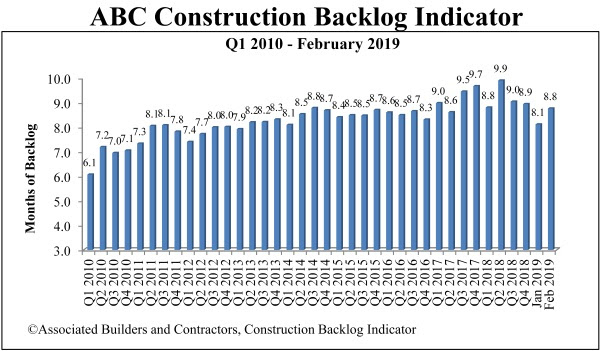 The largest single sloped solar array in the country and renewing the healing role of public parks.